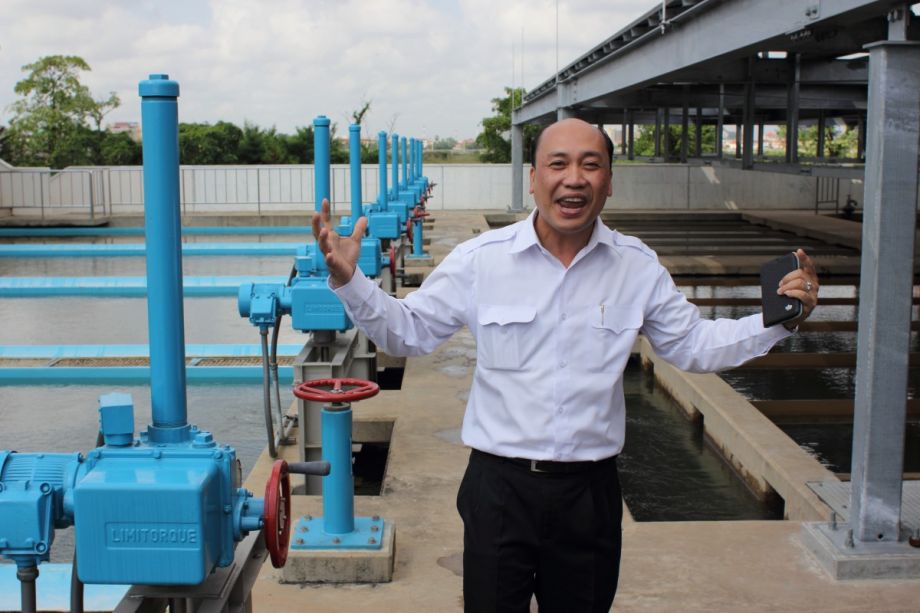 The PPWSA’s Director of Production and Distribution at one of the city’s water treatment plants.

“Water is the basic need,” says Sim Sitha, Director General of the Phnom Penh Water Supply Authority (PPWSA). “It is the foundation of public health and development. And if you have good health and a strong body, you can do anything.”

We’re sitting in the PPWSA’s boardroom. Everything about the space is cool and aquatic: the sapphire rug, the sky-blue curtains, the crisp AC, the crystal glasses of chilled water. Sitha, who has fronted the PPWSA for just over a year, speaks with calm confidence – he knows that he runs one of the best water supply utilities in the developing world.

“Our secret is that there are no secrets – everything is open,” Sitha says. “And we keep water-loss rates low. Water is money.” Adds his deputy, Ros Kim Leang: “There were many challenges getting here. We’ve had to work very, very hard.” 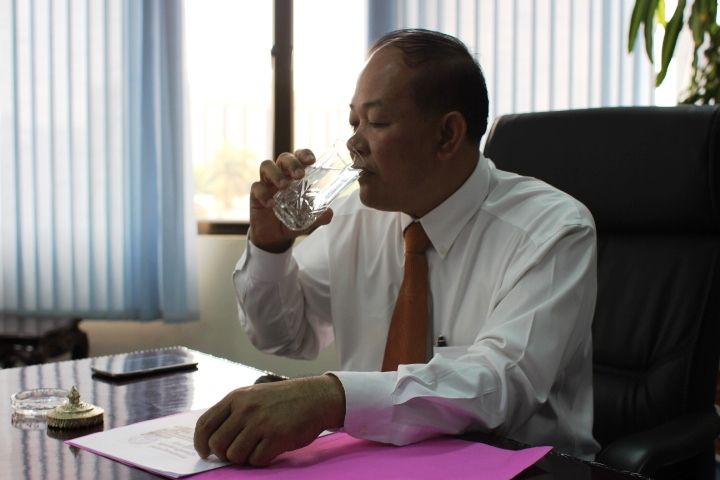 When Kim Leang began working for the PPWSA some twenty years ago, the utility was in shambles. Its infrastructure, which had mostly been built in the 1950s and ’60s, had been neglected and destroyed by two decades of civil war.

By 1993, only 20 percent of the city was receiving running water. This water, which trickled out of taps for about ten hours per day, was generally unfit for human consumption. At the time, the PPWSA experienced water-loss rates of a whopping 70 percent through leaky pipes and thousands of illegal connections. According to a story in the Phnom Penh Post, PPWSA staff were selling such connections for as much as $5,000 to pad their paltry salaries. Less than half of the water the PPWSA produced was actually being paid for at the time. Those without water connections were buying untreated water from mobile street vendors. Almost one-third of all hospital patients during this period suffered water-related illnesses.

“In some areas, like military zones, people would use guns to shoot pipes in order to get water,” recalls Kim Leang.

The reforms began in 1993. Under the leadership of Ek Sonn Chan — who was recently promoted to a position at the national government’s Ministry of Industry, Mines, and Energy — the utility began shedding itself of unnecessary and corrupt staff. It also hunted out illegal connections and forcefully installed water meters throughout the city.

“Customers were not happy to pay bills because they never had before,” says Sitha. “We really had to fight. Not with guns – but people used guns against us.”

With strong support from the prime minister’s office, the PPWSA slowly made ground. When the state-owned corporation became functionally independent from the central government in 1997, all of its earnings went back into the utility, giving the PPWSA the means to aggressively install more meters and replace and add water mains and pipes. Loss rates dropped, and as the number of legal connections increased, so did revenues. Remaining PPWSA staff were offered additional training, salary increases and performance-based incentives. Partnerships with international organizations such as JICA, the Asian Development Bank, UNDP and the World Bank provided the PPWSA with funds, equipment and technical expertise.

After twenty years of such efforts, the results are astounding. According to a recent report prepared by the PPWSA and JICA, 90 percent of this city of two million people received running water in 2012. Water production capacity has increased fivefold since 1993, with four treatment plants now capable of producing 330,000 cubic metres per day. Water now flows 24/7, with interruptions only occurring during the city’s intermittent power outages. A dramatic increase in water pressure, moreover, means that most households no longer need secondary pumps.

Loss rates, meanwhile, have dropped to an impressive 6.63 percent, which, in Southeast Asia, puts lowly Phnom Penh second only to Singapore, arguably the world leader in efficiency. Even New York City, by comparison, has a water loss rate that hovers around 10 percent. Tariff collection has increased to 99.9 percent, and profits have risen by 10 to 15 percent every year since 1997. In 2013 alone, the PPWSA expects to net $10 million. Meanwhile, with prices staying frozen for a dozen years, water remains cheap (about 25 cents per cubic meter, half of what it costs in New York) and, thanks to the World Bank and Marie de Paris, nearly 30,000 low-income households have received tariff and/or connection subsidies ranging from 30 to 100 percent.

But is it drinkable?

“The water quality?” Sitha laughs, pointing to the half-finished glass in front of me. “You’ve just drank my water. It meets WHO’s (the World Health Organization’s) International Standard.”

I’m given a tour of a nearby treatment plant by Ma Noravin, the PPWSA’s Director of Production and Distribution. The plant, which produces about 50,000 cubic metres of water per day, does so via two side-by-side facilities: one built by the French in 1968, and another built with Japanese assistance in 2002. Solar panels are mounted throughout the site. Pump and control rooms are spotless.

Raw water is pumped from the three rivers that flow by the city: the Mekong, the Tonle Sap and the Bassac. Perhaps one ingredient in PPWSA’s success is the continuous annual flow these nearby rivers supply.

Noravin takes me into the PPWSA’s tiny laboratory, where technicians continuously test samples. Acceptable quality, he says, ranges from zero to five nephelometric turbidity units (NTU), a measure of the number of suspended particles in the water. Noravin pours two glasses for my inspection: raw water and the final product. When tested, the first measures over one hundred NTU. The second is only 0.8.

“Do you drink from the tap?” I ask Noravin while he inspects the beakers. He seems taken aback by the question. 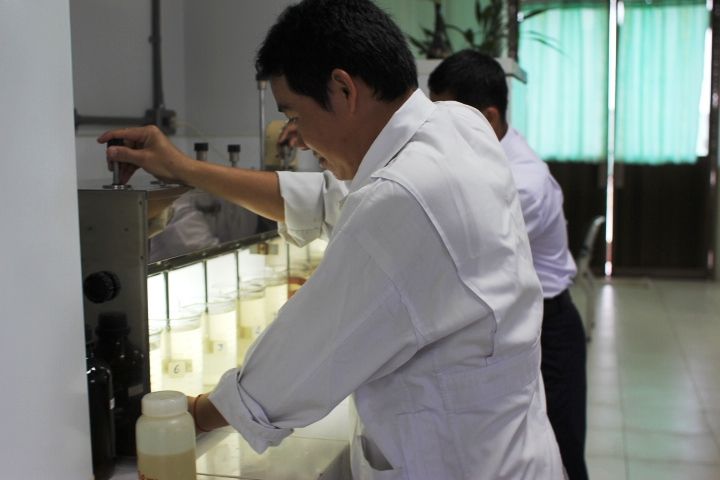 Scientists test the quality of the water running through the city’s pipes.

Confidence in the quality of Phnom Penh’s tap water, however, is by no means universal.

“Most households in Phnom Penh boil or treat their tap water before drinking,” independent water consultant Andrew Shantz tells me. “There is a general lack of trust that the water people receive is consistently safe.” Shantz, a Canadian, has lived in Cambodia for five years, working on water quality projects for organizations such as WHO and the World Bank’s Water and Sanitation Program.

“PPWSA has done an excellent job developing the water supply in the city and providing a high-quality product, but like most other consumers, I still treat my water at home before drinking it. The problem isn’t how the water is being produced – it’s the potential contamination that can occur between the treatment plants and household taps. This could happen when the city’s sewage system floods during heavy rainfall, when maintenance and construction occurs in the pipelines, or from unhygienic storage conditions in residential holding tanks.”

Creating trust in such systems takes time, Shantz says, particularly in developing countries like Cambodia. “But even in developed countries,” Shantz adds, “people aren’t always confident in the quality of what’s coming out of their taps.”

The PPWSA’s ambitious goal is to supply 100 percent of the city with water by 2020. Having already laid 2,000 kilometers of pipes so far, it hopes to add an additional 200 kilometers and 1,400 connections each year to this end. A new 130,000 cubic meter treatment plant should become operational in the near future as well.

Recently, however, the PPWSA has faced a new obstacle. Last year, at the government’s insistence, it became the first company to be listed on the nascent Cambodian Securities Exchange. Chosen as a showcase company, it is still the only business that is listed.

When asked about how this has affected business, Sitha laughs knowingly and says, “There are a lot of challenges,” before describing how Cambodians are still learning to buy and sell shares of stock.

The water, however, keeps flowing, and the PPWSA, which employs over 700 people, remains a shining example to the rest of the region, an improbable success story in a city still striving to solve its resiliency problems. With support from JICA, the PPWSA is even conducting training for municipalities in other developing countries such as Nepal, Burma, Laos and East Timor.

“We’re not only in this business for profit,” Kim Leang says. “We also have to help the poor.”