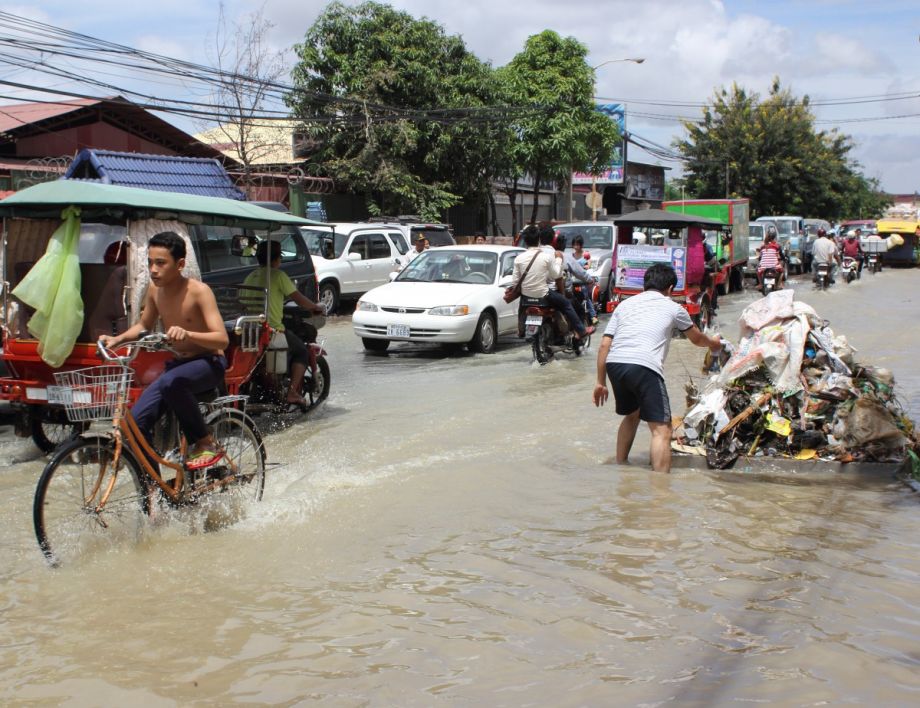 Phnom Penh gets nearly 50 inches of rain during its wet season, yet drainage remains a major problem.

In a middle-class enclave in southwestern Phnom Penh, Ngoun Nat sits cross-legged in front of his row house, sipping a warm can of Angkor Beer as he watches people wade waist-deep through the street. The fetid brown water – strewn with plastic bags, chunks of wood, squirming snails and rancid sewage – laps at the edge of his seat.

“There’s been flooding here before,” the 48-year-old car salesman says, “but we’ve only ever had a few centimeters. It was raining hard last night, and when I woke up there was water everywhere.”

Nat and his neighbors are scratching their heads as to what caused the strange inundation. They speculate that a recent luxury villa development on higher ground nearby is responsible for plugging the drains. 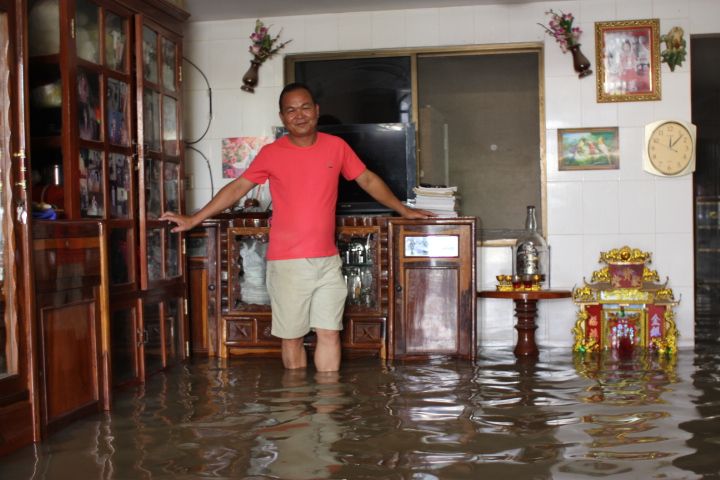 Ngoun Nat in his living room.

He shows me inside where the shin-deep water has ruined his stereo and sofa. Nat’s children watch us from an upstairs window – he is afraid that they’ll drown or be electrocuted if allowed to play in the road.

“I’ve never seen anything like this in my neighborhood,” he says with resignation.

Between May and October, Cambodia’s wet season, nearly 50 inches of rain drenches the capital. Downpours, which tend to be brief yet torrential, instantly overwhelm sewers, flooding many of Phnom Penh’s roads with several inches of rainwater and sewage. Accustomed to these deluges, residents generally carry on as normal, with children splashing about and motorbikes plowing through inundated streets. While some roads are more affected than others, the waters tend to recede after a few hours. In a few outlying districts, however, floodwaters linger, causing structural damage to buildings, destroying vehicles, and leading to public health concerns, such as outbreaks of diarrhea and dengue fever.

Phnom Penh’s drainage system was first built during the French colonial period. Subsequent upgrades and expansions have been made, but such work virtually ceased between the late 1960s and late 1990s when the country was racked by a succession of coup d’états, authoritarian regimes and civil wars. Since 1998, the city’s population has doubled to over two million people, leaving its antiquated drainage system severely overtaxed.

“The population is growing very fast, [faster than] most of our drainage systems have expanded,” Phnom Penh deputy governor Chrean Sophan recently told the Phnom Penh Post. The city currently possesses no complete map of its drainage network, and seeing that it can barely handle seasonal rains, a serious and prolonged storm system would likely leave much of Phnom Penh under water. 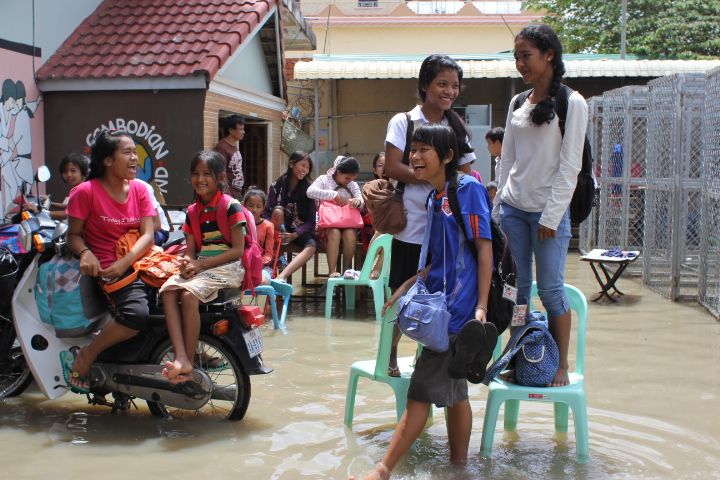 Even during major flooding, life in the city goes on largely as normal.

In 1999, the Japan International Cooperation Agency (JICA), in partnership with Cambodia’s Ministry of Public Works and Transportation, and the Municipality of Phnom Penh, began working to improve the city’s drainage system. So far, work has progressed at a snail’s pace due to funding constraints and the disruptions that construction causes to the city’s already chaotic traffic patterns. And while JICA is helping the city revamp its infrastructure and create a wastewater stocking station, it has had to spend a great deal of time and money simply clearing litter from existing pipes. The $450 million project, which is currently in its third stage, is projected to be completed by 2015.

Uchida Togo oversees JICA’s drainage and flood protection work in Cambodia. “If people don’t throw rubbish into the drainage, it will not clog the system, but here, there is a culture of throwing garbage into the drains,” Uchida told the Cambodia Daily earlier this year, referring to how city residents often push garbage through rusted sewer grates in order to clear blocked drains during floods. “If the pipes are not cleaned, and there’s mud clogging like 80 percent of it, then we cannot collect as much rain water. And if no one takes care of it, the whole system will not function properly.” 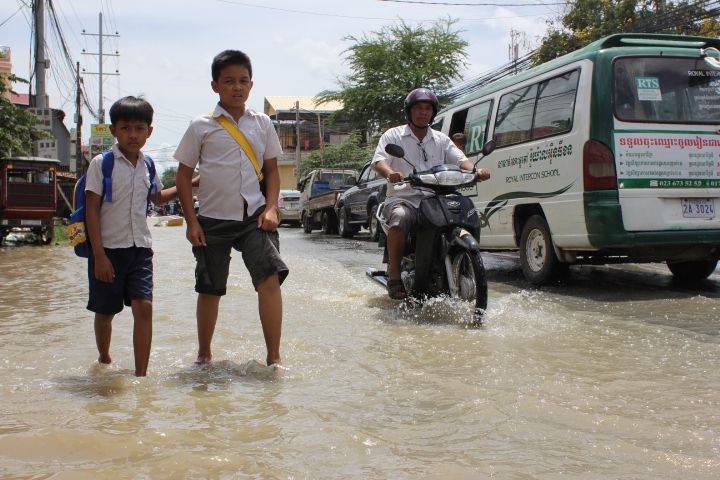 Efforts to solve the city’s drainage woes have been stymied by lake reclamation and litter.

“Some people still have limited understanding of the damage caused by improperly disposing of their garbage,” Dimanche said in an August speech, “so we want to raise awareness and get people involved by participating in the cleaning projects.” Municipal oversight of construction projects would also be beneficial, with improperly stored materials such as sand, soil and stones inadvertently seeping into drains during heavy rains.

Perhaps one of the largest contributors to increased flooding in the city (and something that municipal authorities consistently fail to acknowledge) is the recent filling of Boeung Kak Lake, once a large body of water in central Phnom Penh that acted as a natural storm-water reservoir. This environmentally damaging land reclamation project, which was financed by a company belonging to a wealthy ruling party senator, is thought to be merely a matter of real estate speculation. In the southern end of the city, another natural reservoir, the ten-square-mile Boeung Tumpun Lake, is in the midst of being partially filled as well.

Urban Voice is a community-based project that seeks to map the urban concerns of Phnom Penh residents. Earlier this month, the group, which is run by a team of students and recent university graduates, launched a new campaign to crowd source map data on where flooding occurs in the city.

“Flooding keeps getting worse in Phnom Penh,” says Urban Voice leader My Sovann. “We want to collect data, then present it to city officials and government agencies so they can make improvements to the drainage system. We keep sending them letters, but we still haven’t heard back from anyone.”

Som Chamroern, 23, runs his uncle’s photocopy shop on a quiet street tucked behind the high walls of the city’s gilded royal palace. The shop is a simple affair – two yellowing copy machines and an old PC on which Chamroern makes posters, forms and business cards for his clients.

“Every time it rains, the whole street floods,” Chamroern says. He points to the dip in the middle of the road. “It can be thigh-deep there, and in the shop, the water usually comes up just past my ankles.” These flash floods generally last for two to four hours.

“I have nightmares that the water is going inside the shop’s machinery,” he says. Afraid of electrocution, Chamroern opts to sleep elsewhere. 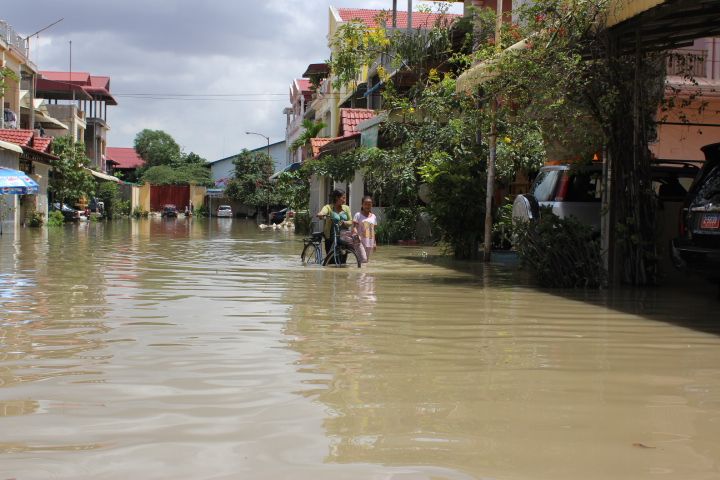 The city periodically clears out the drainage system, but it soon clogs up again.

While Chamroern hopes that municipal authorities will fix the problem, he’s not holding his breath. Like most Phnom Penh residents, he doesn’t expect his city to be able to solve issues like this. Because of decades of conflict, no precedent has been set to this effect, and today essential public works projects are often crippled by a lumbering bureaucracy, disinterest and endemic corruption. Chamroern, however, is neither angry nor resigned to his watery conundrum. If anything, he’s nonchalant, a common attitude here that often manifests as a type of haphazard pragmatism that helps Phnom Penh thrive despite flooding and administrative indifference.

I ask Chamroern how many of his shop’s machines have been destroyed by floodwater. By way of response, he laughs and points to the piles of bricks raising each machine several inches off the ground. It’s only now that I notice that nothing – no wires, papers, or equipment – has been left sitting on the floor.

“The city came and cleaned out the street’s drainage system several years ago, but they haven’t done any work in the area since,” he says. “It’s really up to the authorities if they want to fix this problem. For now, the bricks are doing their job.”