Is Philly About to Cycle Into the Wrong Lane? – Next City

Is Philly About to Cycle Into the Wrong Lane? 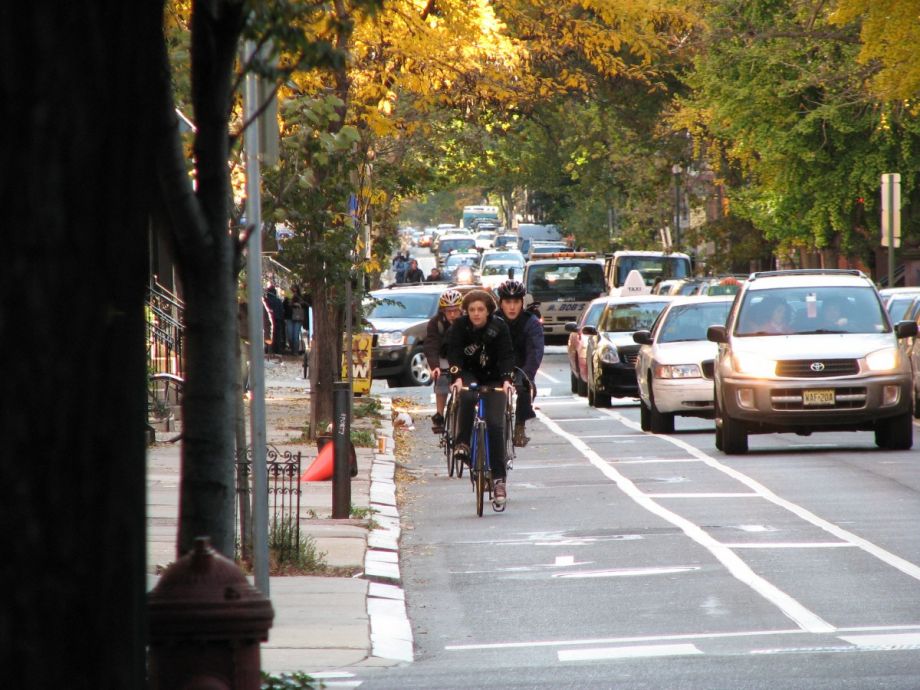 With New York City’s recent launch of its new bike share program, the rush for American cities to adopt greater and better bicycle infrastructure is on. Philadelphia is no stranger to this rush. For Rachel Aaland, in a piece for Next American City, Philadelphia is perfect for cycling “with its density, grid layout, flat topography, large population of university students and existing population of bike commuters (first in the country out of the top 10 biggest cities).” With already about 200 miles of cycle lanes and paths, it would seem Philly was in the right direction.

But Philly might be heading in the wrong lane. Recently, Councilman William Greenlee has introduced a bill to the council that, if passed, would give the city council the power approve or veto the creation of new cycle lanes. If passed, Philadelphia would be the only city in the United States that would require city council approval for new cycle paths.

This is not the first time such a bill has been on the Council’s table. Greenlee introduced a previous version of the bill last year, but it died after meeting resistance from local cycling advocacy groups. The new version of the bill no longer gives the council the ability to approve test lanes, but still retains the Council’s right to give final approval to lanes currently in the testing process.

Proponents, including Greenlee himself, say that the bill is “not anti bike or anti bike lane,” but simply an effort to give local communities a chance to have a say in the creation of cycle lanes. The councilman hopes “the establishment of this ordinance will make it clear you have to work with everybody.” It is also his belief that “there are places…where bike lanes might not be the most appropriate thing.” Greenlee, however, continues to defend himself as in favor of cycling, citing his support for a Philadelphia bike share program in a 2011 interview with the Bicycle Coalition of Philadelphia.

But will the move to add a layer of council politicking to cycle lane creation harm Philly’s move towards bikeability? Detractors from say the bill likely bog down bike lane plans in bureaucracy, adding to the potential that plans will never make it out of city hall. Sarah Clark Stuart, policy director of Bicycle Coalition of Philadelphia, argues in an interview with newsworks.org, that this extra bureaucracy could weigh down new cycle lanes to death: “If there’s a delay, that will kill a bike lane, because bike lanes can only go in when streets are repaved and repainted.” She goes on, in an interview with Philadelphia City Paper, that “the repaving process requires a lot of planning, and then contracts, then coordination with other agencies…to overlay an ordinance on top of that process could hamper the ability of the city to include a bike lane in the repaving plan…if that opportunity is missed, you’ve lost that opportunity to paint the bike lane in for another 15 to 20 years.” An editorial from The Philadelphia Inquirer states that “creating more red tape for bike lanes sends the message that the car remains king…and that the goal of building a more sustainable, less-polluted city is a lower priority.”

But all is not lost. Recently, the Mayor’s Office of Transport and Utilities (MOTU), announced it is teaming up with the Dutch Embassy to find what Philly can learn from the cycling-savvy Netherlands. It seems that while City Hall is worried about who gets to make what decisions, city administrators and locals continue to crusade ahead to bring more cycling to Philadelphia.

MOTU, alongside with representatives of the Netherlands, will host the ThinkBike workshop on June 18 and 19. Similar sessions have been held in Chicago, D.C., Miami, San Francisco, and L.A. Bringing together Dutch expertise, local planners, and cyclists, the workshops hope to identify ways Philadelphia can become more cycle friendly. Perhaps the topic of Councilman Greenlee’s bill will come up.