Instead of Reenacting the Past, This Indy Neighborhood Is ‘Pre-Enacting’ the Future – Next City

Instead of Reenacting the Past, This Indy Neighborhood Is ‘Pre-Enacting’ the Future 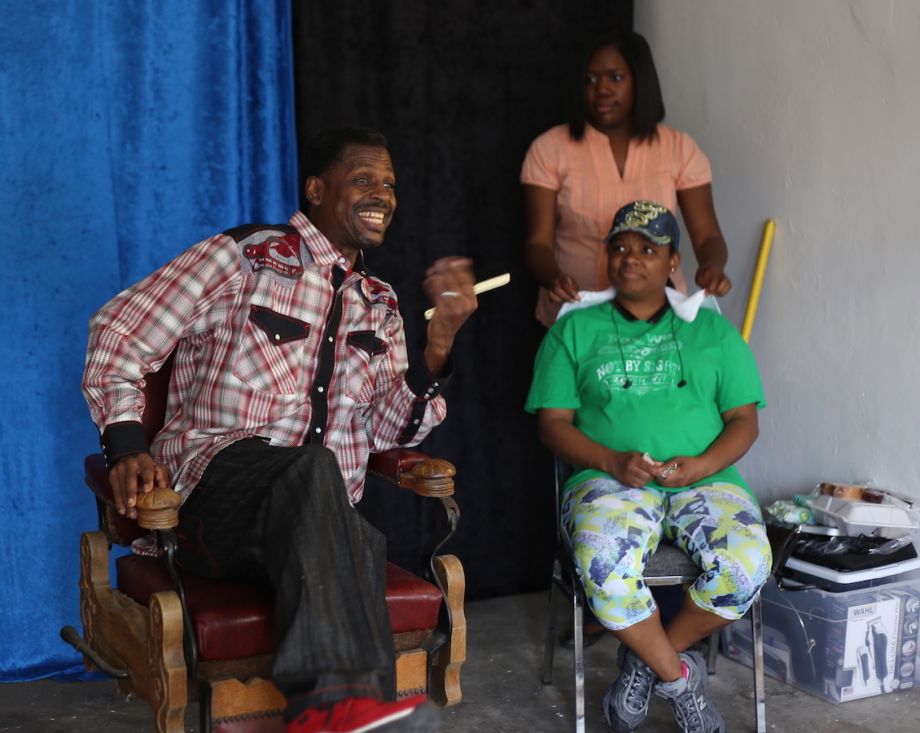 Actors play barbershop customers in the Monon16 neighborhood in Indianapolis. The play was part of a “pre-enactment,” an exercise designed to get neighbors talking about what kind of equitable development they would like to see. (Courtesy Harrison Center for the Arts)

One Saturday last October, a visitor to seven blocks of Indianapolis’s 16th Street would have glimpsed a fleeting vision: a neighborhood that doesn’t quite exist yet, struggling into being.

The candy store that closed years ago was open again. A vacant storefront had become a barbershop. Another had transformed into a center for financial advice. A café had popped up in the middle of the road, slowing down the traffic that was crawling along anyway, taking in the sights of this suddenly vibrant stretch of the neighborhood, known as Monon16.

The shops, the café, they were all temporary — stage sets in an elaborate experiment in inclusive development. But Joanna Taft, executive director of the Harrison Center for the Arts, hopes the effects will be long-lasting. She was the brains behind Pre-Enact Indy, a project that sought to imagine a neighborhood that had developed without displacement, embracing the future without forgetting the past. For one day in October, the Harrison Center, 13 theater companies, and over 300 actors made that vision real for Monon16, a neighborhood that has struggled with vacancy and disinvestment, and is now on the brink of gentrification.

Taft says she got the idea after observing how the Harrison Center has affected its own surrounding neighborhood, about a mile west of Monon16. She’s proud that vacancies are down, that the art center opened a new charter high school. “But throughout, I wondered, what could we have done to develop more inclusively?” she says. “We did revitalize a neighborhood, but the neighborhood is very different now. It’s very expensive now.”

So when Taft saw the early signs of gentrification in Monon16, she wondered if there was a better way. She spent a year asking what people wanted from their neighborhood, and heard a lot of nostalgia. “The neighbors when you ask them what they want, they would always talk about the good old days,” she says: they’d talk about people gathering on porches, about good schools, about neighborhood gardens.

At first, Taft thought the Harrison Center could recreate that past for them. But the longer she talked to neighbors, “I thought a reenactment wasn’t good enough. We need a pre-enactment. I had the idea we could use theater to pre-enact a future that is just and equitable and inclusive.”

With the help of 13 theater companies from around the city, the Harrison Center built about 10 temporary buildings, and activated other vacant structures to create over 20 different stages. “We took the hopes and dreams we collected [in interviews with residents] and anchored all of the scripts in those hopes and dreams,” says Taft.

For just one day in October, the pre-enactment was on. Some of the stages hosted formal performances. Others, like the barber shop, were interactive experiences. The barbers — all actors, not performing any shaves — told stories from the neighborhood. The financial center had an actor who was also a CPA, and could refer visitors to a real neighborhood workforce development program with a financial services arm.

And then there were actors just roaming the streets. Many were from Freetown Village, an Indianapolis-based living history troupe that interprets African-American history and culture. No strangers to reenactments, the troupe dug into the neighborhood stories the Harrison Center had collected, and created characters around them. Monon16 has a lot of influential, historic churches, so one actor played a “church lady,” who told people about the various programs the churches were doing in the community — some real, some based on residents’ hopes and dreams.

“We performed as if it was already taking place,” says Ophelia Wellington, director of Freetown Village. Another actor talked about his businesses in the community. He was so convincing, says Wellington, that people started giving him their business cards. “They thought, well, if you get that going I want to be a part of it,” Wellington laughs.

Another performance, by Asante Children’s Theater, depicted women who had grown up in the neighborhood together, first as children, and then today. “Stoops,” written by a woman who grew up in Monon16, both reflected on the neighborhood’s past and informed the audience about present-day struggles and opportunities. One of the characters worried about keeping her father’s house despite rising property values, and talked about proposed legislation that would limit increases. Another felt enthusiastic about pre-enactment and hopeful about the future. A third was skeptical.

The set from “Stoops,” a performance that was part of the Monon16 “pre-enactment.” (Courtesy Harrison Center for the Arts)

Their ambivalence reflected real responses to pre-enactment in the neighborhood. Ron Lovett, a retired firefighter who lives in Monon16, helped gather long-time residents once a week to share stories in the weeks leading up to pre-enactment. They met at a new brewery. Lovett says he’s happy with the changes he’s seeing — the new businesses, the return of trick-or-treaters — and that Pre-Enact Indy looked a lot like the future he wants for Monon16.

Deborah Asante, founder artistic director of Asante Children’s Theater and a performer in “Stoops,” says she was doubtful the project would have any impact at first, but when she saw how older residents were being engaged, and new residents were being introduced to the neighborhood’s past, she was won over. “Now they have a chance to buy into that history. And then it becomes a whole neighborhood and not just a place where, ‘Shoo shoo, I’m here now.’”

But on the day of, she also heard from friends who didn’t think it would make a difference. “This doesn’t mean anything. People are being railroaded out of their houses. This is a fine fare-thee-well to the black people in the neighborhood,” people told her. Asante said she did wish that the black community had been better informed and engaged, and she hopes that will happen in the future — Pre-Enact Indy is already on the books again for next year.

In the meantime, it may have a more immediate effect. During the planning for Pre-Enact, Monon16 was chosen as the first “Lift Indy” neighborhood, meaning that the city will invest $4.5 million into Monon16 over the next three years. The program was designed to focus the city’s HUD funding into one neighborhood experiencing market pressure every year. Many of the same neighborhood groups that planned pre-enactment applied for Lift, arguing that Monon16 didn’t need help to develop — market forces were already well underway — but it did need help to develop inclusively. The Lift Indy funding will go towards developing market-rate and affordable housing, as well as economic programs and infrastructure improvements. One of the first projects will be to upgrade Kennedy-King Park, where Robert Kennedy was speaking when Martin Luther King Jr. was shot, 50 years ago this April.

And Taft says pre-enactment has already yielded subtler wins. Worried that the opening of a few hip new businesses meant gentrification had already come for Monon16 and it was too late for pre-enactment to inspire a more inclusive neighborhood, Taft called up the owners of a new whiskey distillery and of a Mexican restaurant before the October event. She asked how they’d be good neighbors, how they would contribute to imagining a better, future Monon16. Both owners ended up committing to hiring local. The whiskey distillery even worked with a local workforce development group to hire local veterans.

Taft was elated. For her, pre-enactment doesn’t just refer to a one-day event. It’s a whole philosophy of neighborhood change, a mantra, and an imperative: think about how today’s actions will contribute to an equitable future.