Hydrofracking: A Complex Process Sparks an Intense Debate – Next City 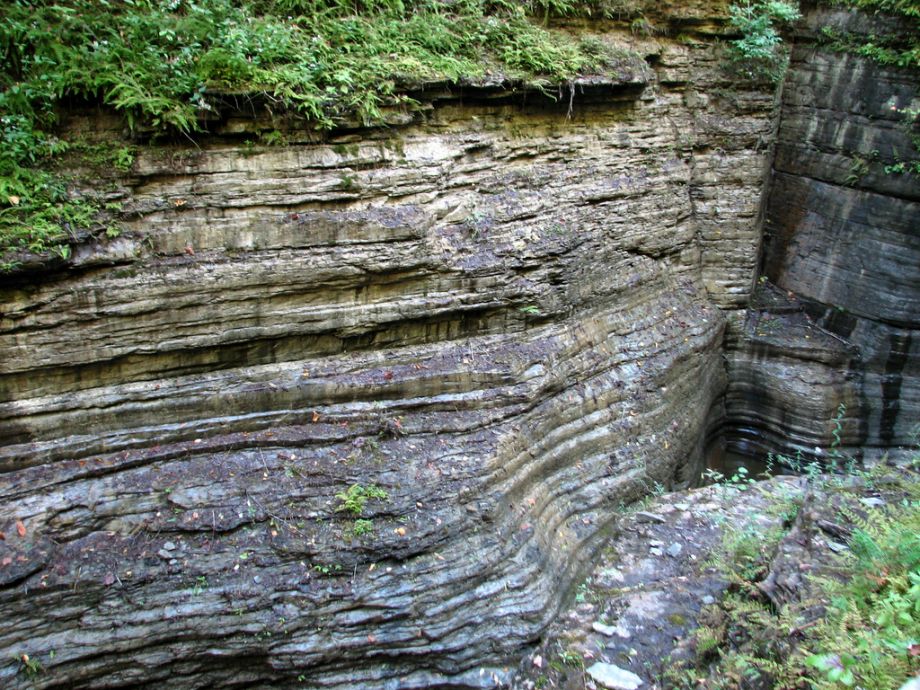 A rock formation in Watkins Glen, N.Y., an area along the Marcellus Formation. Flickr user bobistraveling

In the current debate regarding hydrofracking, the method of tapping natural gas from deep within the earth’s crust, there are only a handful of facts on which people from all sides of the debate can agree. Chief among them is that the Marcellus Shale Formation, which extends from Upstate New York through Pennsylvania and eastern Ohio, contains an enormous volume of natural gas – an estimated 168 trillion to 516 trillion cubic feet, according to the New York State Department of Environmental Conservation (DEC). In other words, Syracuse, the Finger Lakes region, and the Catskills are sitting on fields of natural gas that would satisfy New York State’s current levels of demand for the stuff for anywhere from 100 to 500 years.

In the best-case scenario, tapping that resource could bring millions – if not billions – of dollars and hundreds of thousands of jobs to a cash-strapped state and help liberate the U.S. from its dependence on foreign oil. At worst, if improperly regulated, tapping the Marcellus Shale could lead to serious environmental degradation and render undrinkable the New York watershed, for upstate and downstate residents alike.

The technology behind hydraulic fracturing, better known as hydrofracking, has been around since the 1940s. Essentially, the process consists of drilling a well deep into the ground, then sealing its walls with steel or cement. Water is then forced down this chute, which fractures the rock below, allowing gas to escape upwards. Once the well is tapped, the water used to fracture the rock flows back up; because it contains high volumes of salt, it must be treated or disposed of properly, to ensure that it doesn’t make contact with the earth. Hydrofracking, used to access coal and geothermal energy as well as natural gas, is relatively common practice – at least in Texas, Wyoming, Oklahoma, and other states that we tend to think of, in the national imagination, as “oil” states.

Local hydrofracking opponents cite, among other problems, its potential to contaminate the watershed. Of greatest concern is flowback, says Dereth Glance, executive program director for Citizens Campaign for the Environment. She points out that New York’s existing treatment system is already stressed – “we have a $32 billion need for wastewater infrastructure, according to the DEC” – and that adding significant wastewater to an already overburdened system is dangerous. Another concern she has is that untreated flowback water is often kept in open pits, which can overflow during a storm. Finally, she points that both New York City and Syracuse get water from unfiltered reservoirs; contamination has the potential to change that, and “filtration is very expensive,” she says.

It’s worth pointing out that Glance’s concerns are not without merit; as Paul Steiger wrote at ProPublica, which for years has been reporting on hydrofracking throughout the country, “there have been well over 1,000 incidents in which spillage or leakage of fluids used in fracking have damaged water supplies.”

But Chris Tucker, spokesperson at the industry-funded organization Energy in Depth, says that recycling flowback water is a good solution – the water is used to frack other lines – and adds that some large companies hydrofracking in Pennsylvania already do so. For his part, Stanford geophysics professor Mark Zoback says that proper regulation and handling of flowback water should put residents’ fears to rest. “When the water is disposed of, it’s disposed of so it’s not in contact with drinking water. But you don’t have to take anybody’s word for it. Simply monitor water quality” of surrounding watershed, he says, to assail lingering fears.

In fact, of far greater concern than flowback, says Zoback, are “poorly cemented wells,” which “will leak whether you hydrofrack or not.” He recommends that wells be cemented with steel and extra barriers, for increased protection, and calls for stringent government oversight of well construction.

But does the government have the money to properly fund such regulatory agencies? The DEC is already losing agents through attrition, Glance says, because of “budget shrinkage.” If widespread hydrofracking is permitted, she asks, who, she says, will “hold the companies accountable?”

In Syracuse, Ithaca, and surrounding towns, the feeling on the ground is tense, with public opinion overwhelmingly against hydrofracking and paranoia running high. Nevertheless, some 26,700 leases have been signed, and those landowners who have leased mineral rights to Chesapeake and other oil companies stand ready to reap a profit when gas begins to flow (in addition to money earned at the lease signing). Neighbors who chose not to lease will be forced to contend with increased truck traffic, air and noise pollution, and general environmental degradation heretofore unseen in these largely rural, pristine parts of the state.

Partly as a result of the controversy, the New York State Senate signed a moratorium on hydrofracking throughout the state that’s set to last until May 2011. (Surely the June blowout at a hydrofracking well in the Marcellus Shale in Clearfield County, Pennsylvania, also contributed to the measure.) The bill must go through the Assembly before Governor Patterson can sign off on it, and it’s expected to pass when it does later this fall. Regardless, some areas of Central New York – including Tully, DeWitt, Skaneateles, and Onondaga County – have enacted their own moratoriums; the Marcellus town board is set to do the same August 26.

At the same time, as part of its inquiry into the safety of the practice, the EPA will hold an open meeting in Upstate New York next month, where residents can voice their concerns. The agency has already held such meetings in three other cities – Forth Worth, Denver, and Canonsburg, Pennsylvania – where they lasted for four to five hours, with the majority of that time devoted to public commentary. The fourth and final meeting, initially scheduled for August 12th in Syracuse, was slated to last 14 hours – from eight in the morning until 10 at night – because so many people had signed up to participate. (Ultimately, citing public safety concerns because of anticipated crowds of up to 10,000, the meeting was postponed.)

“If people in Western New York don’t want gas development, that’s their privilege,” says Zoback. But he adds that natural gas is an “attractive transition fuel” for the U.S. to wean itself off of coal and other fuels, and onto renewable energies. Natural gas “is a strategic fuel” for the nation, he says. New Yorkers “need to think beyond their self interest, to what’s in the better interest of the country, and, in fact, the world.”