How the Shutdown Is Affecting Housing, Food Stamps, and More – Next City

How the Shutdown Is Affecting Housing, Food Stamps, and More 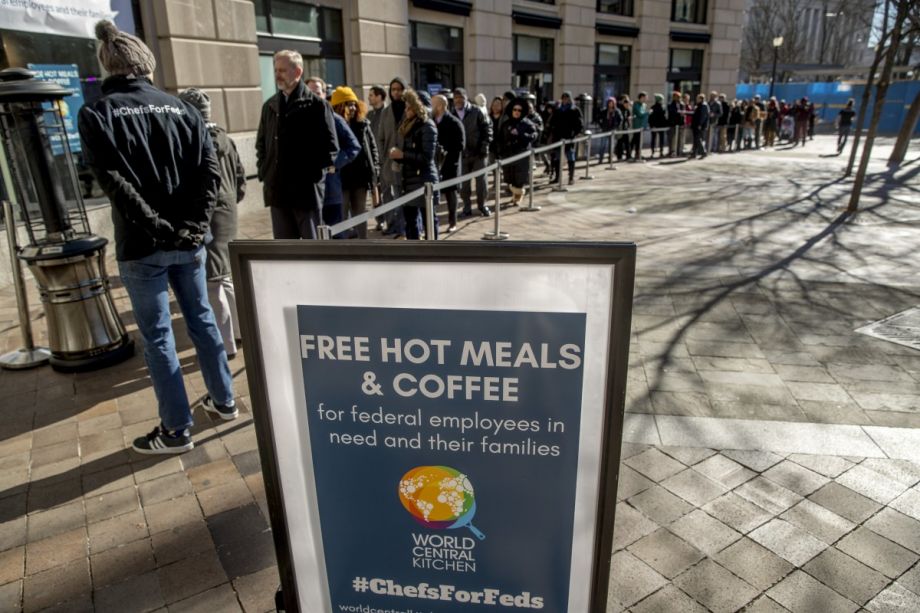 Furloughed workers wait in line to receive food and supplies from World Central Kitchen, the not-for-profit organization started by Chef Jose Andres in Washington, Tuesday, Jan. 22, 2019. The organization, devoted to providing meals in the wake of natural disasters, has set up a distribution center just blocks from the U.S. Capitol building to assist those affected by the government shutdown. (AP Photo/Andrew Harnik)

As the federal government shutdown enters its second month with no end in sight, furloughed federal workers, food stamp recipients and other vulnerable portions of the population are finding themselves in the same predicaments.

Food pantries have seen lines stretching around the block as furloughed workers go without paychecks. A church in D.C. ran out of food at its usual twice-weekly food distribution event. The scene wasn’t unusual, as food banks around the country have seen higher attendance, mostly from federal workers who have missed paychecks.

“It’s a little sad, but I’ve been through shutdowns,” Bennita Dillard-Brown, 55, a Justice Department employee, told the Washington Post. “But it never came to this before.”

But food banks can’t provide for everyone. Carrie Calvert, the managing director for government relations at Feeding America, told the Associated Press that for every meal served at a Feeding America food pantry, federal food aid provides 12.

That food aid is at risk, too. Beneficiaries of SNAP have seen February’s balances deposited into their accounts early, the AP reported. But several states are now warning recipients that they need to make those benefits last at least six weeks, and it’s unclear when another deposit would come.

Meanwhile, a few thousand stores can’t even accept food stamps, NewsHour reported. Those stores, which USDA says are “a small percentage of stores,” failed to renew a license to accept EBT before the government shut down.

“Because of an argument about a wall, I have to look people in the eyes every day and tell them they can’t pay for their food,” Sarah Jackson, an employee at one such store in Arkansas, told News Hour.

In housing, tenants who rely on rents subsidized by HUD are at risk of being evicted. The New York Times reports that landlords, many of whom have been patient through previous government shutdowns, are starting to feel the pressure as this one stretches seemingly endlessly on. A landlord in Newport, Ark., told 43 federally subsidized tenants that they would need to pay their full rent starting in February, the Times reported. “I can’t pay that much; it is beyond my means,” said one tenant, Amanda Neeley, a grandmother who gets by on a disability check. “It is not fair.”

Shelters for the homeless are feeling the pinch, as well. Many rely on reimbursements from the government. In Kokomo, Indiana, one shelter for victims of domestic violence hasn’t seen any funds from a $40,000 grant renewed in October.

In Connecticut, the state House approved emergency legislation that would offer interest-free loans to furloughed federal workers, Hartford Business reported. Banks and credit unions that choose to participate can offer up to three loans per person, equal to the worker’s monthly after-tax pay. The state will guarantee ten percent of the loans. The state Senate is expected to approve the measure.

At this point, the shutdown’s effects will likely be far-reaching, Bloomberg Opinion columnist Noah Smith said. With approximately 800,000 government workers furloughed and up to four million contractors not receiving pay, the number of workers affected is about 3 percent of the country’s labor force. A typical recession usually sees unemployment rise by about 2-4 percent. This event is not quite the same as unemployment, but “the macroeconomic spillovers could be comparable,” Smith wrote.

The shutdown is also slowing or stalling the entry of some new products into the market, Smith added. New cars that can’t get emissions certifications from the EPA can’t be sold; brewers can’t sell new beer while they wait for the Alcohol and Tobacco Tax and Trade Bureau to approve their labels (this has led to at least one lawsuit). And all that could lead to companies pulling back on making big investments, which would ultimately lead to a real recession.