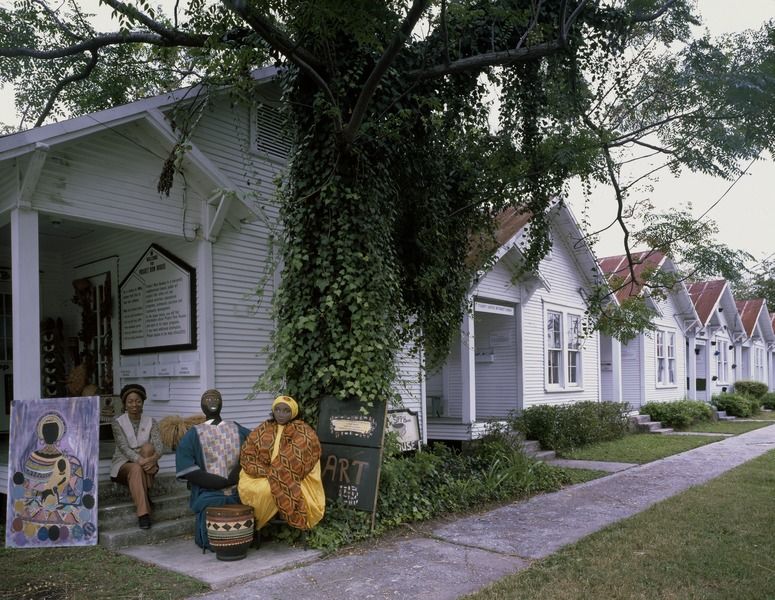 An artist sitting outside a shotgun house, part of Project Row Houses, a public art project in 22 shotgun houses in Houston's historic Third Ward, celebrating the area's historic roots and maintaining the connection to its present day. (Credit: Library of Congress/Carol M. Highsmith)

Houston’s Third Ward residents are turning to community land trusts as a push against the effects of rising home prices.

The Third Ward, a historically black community, was established in the late 19th century. Now, more than a century and a half later, the community finds itself threatened by gentrification — in particular, displacement of longtime residents by soaring house prices and property taxes. In response, residents are considering action to help preserve affordability in the face of encroaching gentrification and hold on to the rich culture of the Third Ward. The city’s response, reports the Houston Chronicle, is a city-funded community land trust.

A community land trust is a nonprofit entity that aims to make housing permanently affordable through the purchase of land that it can make available for rent or for homeownership to low-income residents at affordable rates in long-term agreements. Community land trusts are on an upswing in cities throughout the country, in response to gentrification and the displacement of low-income, longtime residents and tightly knit communities.

According to Fannie Mae, 225 community land trusts are active around the U.S., representing some 20,000 rental units and 15,000 homeownership units.

“What’s important is that it slows the rate of gentrification,” Van Zandt said. “You want things to be increasing in value, but slowly enough that incomes can keep up with increased taxes.”

Third Ward residents’ concerns are real, the Chronicle reports, citing an analysis by Governing that found that median home prices increased some 176 percent from 2000 to 2013 in the neighborhood near downtown. The area includes Emancipation Park, which reopened last year after a $34 million, 3-year renovation. The New York Times also reported that new townhouse developments are attracting wealthier — and whiter — residents to the neighborhood.

Initiatives in Houston, such as the Land Assemblage Redevelopment Authority (LARA), have previously been enacted to address the effects of increasing housing prices and create affordability, but action has been slow and produced few results, the Chronicle’s editorial board has argued.

In the Third Ward, some 75 percent of residents currently rent. Edwin Harrison, executive director of Row House Community Development Corporation, told the Chronicle he sees a real need not just for homeownership through a land trust, but low-density rental housing. Row House already has a presence in the Third Ward, promoting and managing low-income rental housing, the Chronicle reported.

Back in April 2017, Houston Mayor Sylvester Turner announced the creation of the Complete Communities initiative — a far-reaching draft plan that includes community land trusts for five selected neighborhoods, among them the Third Ward. The Complete Communities draft has not been approved by the necessary parties. Jeffrey Lowe, assistant professor of urban planning and environmental policy at Texas Southern University, told the Chronicle the neighborhood needs a policy intervention, not an intiative, however well-intentioned.

“Community revitalization has not been our focus,” Lowe said. “[The city’s focus] has been primarily the redevelopment of places where market approaches benefit those who already have the means. The community land trust is an alternative to that while at the same time it could help advance democratization.”