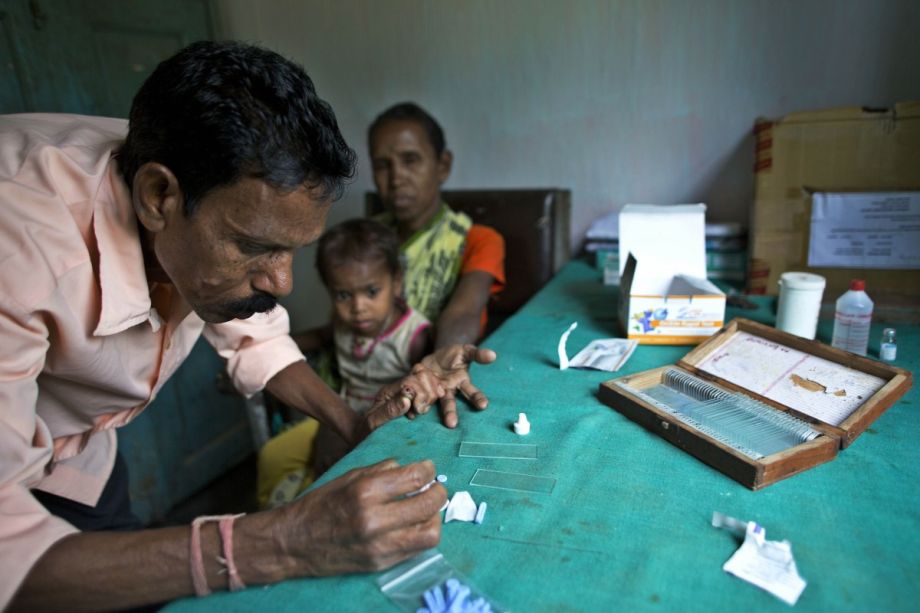 A health assistant collects blood samples of a woman suspected to have malaria at a hospital on the outskirts of Gauhati, India. New simple tests for the disease could help prevent overtreatment. (AP Photo/ Anupam Nath)

The line is amusing, but the real life problem isn’t. Painkillers aside, medications are often “credence goods — the buyer must take their quality on faith,” attests an article recently published in an American Journal of Tropical Medicine and Hygiene supplement, “The Global Pandemic of Falsified Medicines: Laboratory and Field Innovations and Policy Perspectives.” When drugs don’t contain the active ingredients they claim to offer, the health implications can be deadly.

“In 2013, an estimated 122,350 deaths in children under 5 years of age in 39 sub-Saharan African countries were associated with the consumption of poor-quality antimalarials,” Joel Breman and his co-authors write in that AJTMH supplement.

In an interview, the senior physician-researcher at the U.S. National Institutes of Health was even more forthright. “I call them murderers,” he says of manufacturers and sellers who pass off improperly manufactured drugs that “clinicians and patients, all unsuspecting” use or give to children. His work focuses on how to prevent deaths via poor-quality medications.

His recent studies began, he says, with his previous look at the quality of drugs for malaria, a mosquito-borne parasitic infection common in much of sub-Saharan Africa, Asia and Latin America. “A third of all the antimalarials, among these 4,000 samples, were absolutely, outright fake,” he says. “Nothing. No active ingredient.”

Drugs marketed as effective but offering little or no medicine are most commonly found in developing countries. Here, manufacturers may be improperly monitored, and an overall lack of clinicians can impel prescription systems to be minimized or eliminated. Drugs are often sold by informal vendors in the back of buses. Taken together, the situation leads to less-stringent monitoring, fraudulent or poor-quality practices, and unsuspecting consumers.

The situation is far from hopeless, however. Breman’s article garnered widespread attention, he says, leading to new studies offering a range of solutions. They include detection technologies in field surveillance, policy interventions and coordinated international responses. (Breman says he also wants to see prosecution of the informal vendors who distribute fake drugs to developing-world pharmacies, hospitals and laypeople.)

Unlike top-down monitoring and enforcement, detection technologies work within the same informal, street-level economy where the problem currently exists — particularly when taken in tandem with similar diagnostic technologies already on the market.

One innovation is the test card: a piece of cardboard impregnated with dried chemicals that can detect the presence of the active ingredients in medication. When a pill is ground up and smeared onto the card, the reagents change color if a sufficient amount of the active ingredient is present. No color change indicates no medicine — a useless fake drug. Cards for malaria test for the full complement of medications that kill the mosquito-borne parasite: chloroquine, doxycycline, quinine, sulfadoxine, pyrimethamine, primaquine, plus newer artemisinin combination therapies.

The product is easy to use. “Users do not have to weigh or dilute anything or handle any chemicals,” Abigail A. Weaver and Marya Lieberman, of University of Notre Dame, explain in a study. “The test cards are inexpensive (manufacturing expenses under $0.50 per card) and do not require purchase of any capital equipment … the turnaround time for analysis of a dosage form is under ten minutes. Standards for comparison may include cards run with authentic samples, or stored images that may be shared commonly among test users.”

In short, this is a healthcare product simple enough to be used on the street corner — perhaps by the same class of untrained, informal vendors that currently sell medications in the bus terminals and marketplaces of the developing world.

The cards have a purpose beyond identifying non-active pills: They can also help identify drugs that contain too little of a particular chemical. From Breman’s article: “The impact of falsified and substandard medicines … extends to increased microbial resistance, when active drug is in low amounts in the product,” exposing malaria parasites to the chemical without effectively killing them. “Existing drug-resistant microbes in patients can be spread by mosquitoes and other vectors when no active ingredient is present.” The problem can cause even users of good-quality drugs to suffer adverse outcomes, including death, from resistant strains of malaria.

Of course, drug resistance is also increased by overtreatment — common in places where high incidence of malaria, insufficient clinical care and poor control of pharmaceuticals leave mothers treating any pediatric fever as malaria. To avoid overtreatment, another recent innovation could be helpful.

Breman points to rapid diagnostic tests (RDTs), cardboard or plastic cards to detect the disease itself from a blood sample drawn by a finger-prick. Like drug-testing cards, RDTs require little equipment or training. The cards carry a chemical that reacts to an antigen found in the blood of a patient with malaria, changing color in the same manner the drug testing cards do. The result is ready in minutes — and it offers assurance that the malaria parasite is actually present and needs to be treated.

Taken together, all three products — rapid diagnosis, malaria medication and drug efficacy testing — can be sold together, outside of a clinic, by a vendor with no other expertise. Breman is skeptical that every point of sale can be vetted (one reason he advocates for legal action against fake drug dealers), but such a combination is a notable striving toward efficient access to care for all. Dr. House would likely scorn such optimism, but this might even be a step toward eradicating malaria.