From Uninspired to World-Class, Visions for Philly’s Second Casino Emerge – Next City

From Uninspired to World-Class, Visions for Philly’s Second Casino Emerge 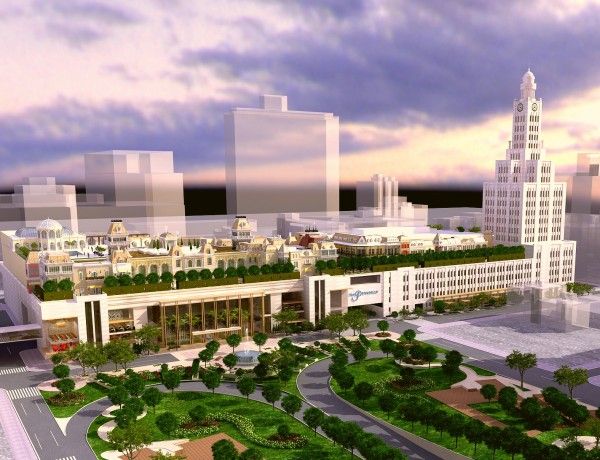 Philadelphia got its first long look at proposals for a second casino on Tuesday, as would-be owners and operators appeared before the Pennsylvania Gaming Control Board in a public hearing at the city’s convention center.

Six pitches and six hours later, three options emerged: A pair of distinct visions and a compromise between the two.

Option 1: Put the next casino in the city’s core. Use it to either fill in a gaping hole on a struggling but critically important intersection (8th and Market streets) or to bridge a long and desolate gap between Center City and the redeveloping North Broad corridor.

Option 2: Expediency first. Site the next casino far, far away from urban neighborhoods, and as close to major highways as possible. The board heard three proposals Tuesday from groups with South Philly’s Sports Complex area in mind.

Option 3: Steve Wynn’s proposed Fishtown casino splits the difference. It’s located on a prime, largely undeveloped riverfront parcel less than a mile north of the existing SugarHouse Casino, but it’s separated from its nearest residential neighbors by I-95.

Which would you choose? (“None of the above” does not appear to be an option.)

For Philadelphia urbanists, the question is a vexing one.

Two of the projects, Bart Blatstein’s massive “Provence” and the more modest (but still plenty ambitious) Market8, are selling themselves as nothing less than Center City redevelopment engines — job-creating behemoths that will breathe new life into stubborn and difficult blocks.

Both aim to fill large underused Center City parcels that are undeniable blemishes on the urban landscape. Both proposals downplay the centrality of the casino operation (indeed, the slots and table games are on the second floor of each development, while the ground floors are reserved for restaurants, retail and lobbies). And both have grand architectural ambitions: The over-the-top French rooftop village of Provence, versus Market8’s glass-sheathed tower, to be designed by starchitect Enrique Norton’s Ten Architectos firm.

And the pitch men and women for both projects know just what language to use to tickle urbanists’ fancy. Their projects, they say, “fill the hole in the donut.” Market8 will have “a dialogue with the street, a dialogue with the city.” The Provence, meanwhile, will “respect and enhance Philadelphia’s urban fabric.”

Most of Pennsylvania’s 11 existing casinos are little more than uninspired slots barns, so Blatstein and Market 8’s Ken Goldenberg should be congratulated for having a little more ambition than their would-be competitors.

But the notion that casinos — even casino/retail/entertainment complexes — are net positives for urban cores is far from proven. There is, of course, a raft of social ills associated with gambling. Would these be outweighed by a renaissance on the blocks where the urban casinos are cited?

Maybe, but then again, maybe not. Atlantic City’s 37-year experiment with legalized gambling has largely been a disaster, and Las Vegas is just too much of an outlier to serve as a useful model for other cities. Downtown Cleveland’s brand new Horsehoe Casino is a model worth examining, but at the moment it is far from a runaway success.

And yet, the Center City proposals are a model of enlightenment compared to the highway-oriented gambling halls that have been pitched for deep South Philadelphia.

The board heard from three would-be stadium-area operators. One of them, Casino Revolution, vowed they could be up and running within six months — provided gamblers didn’t object to losing money in a huge, low-slung warehouse that is now being used by food wholesalers.

Live! Hotel & Casino, proposed for 900 Packer Avenue, was almost as uninspired. The chief selling point is the track record of Greenwood Gaming and Cordish Cos at running moneymaking casinos in Bensalem, Florida and Maryland.

Penn National’s proposal for Packer and 7th Streets is of a similar ilk, but with a twist. The applicants have floated a complicated ownership scheme that would create a new non-profit, the Philadelphia Casino Benefit Corp., which would receive a large chunk of the profits and in turn funnel that cash to the City of Philadelphia’s depleted pension fund or to the school district. U.S. Rep. Bob Brady has been actively lobbying for this option.

Predictably, though, it was casino impresario Steve Wynn who put on the best show Tuesday. (Blatstein, a notable showman himself, lamented the fact he had to follow Wynn’s act: “You, you, you … you’ve got a gift,” he said to Wynn.)

In essence, Wynn proposes a second SugarHouse, but with heaps more elegance and style. (For one, a 2,000-foot river walk and extensive park-like grounds would span a vast 70-acre waterfront site on the Delaware River.) And yet, while Wynn’s track record elsewhere is strong, his history in Philadelphia is shaky. In 2010, he dropped his bid to rescue the failed Foxwoods casino project, a move that shocked regulators, officials and his local investors.

But then again, risk is inherent to the casino business — for the investors, for the patrons, and for the communities that host them.

If you have three hours to spare, you can watch the entire Gaming Control Board hearing below.