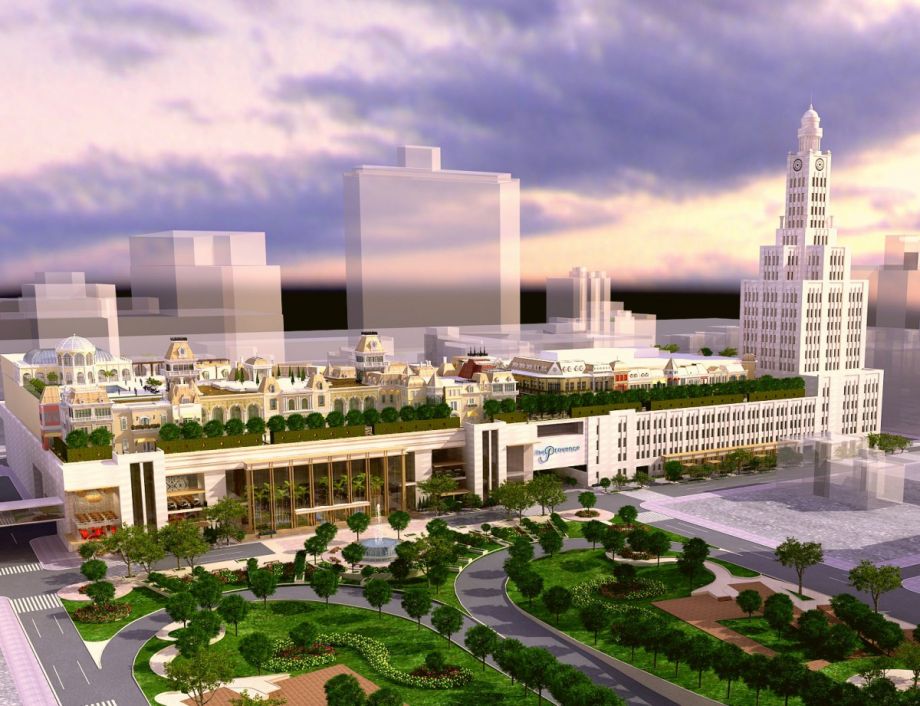 The project will build off the former Inquirer building, at right, and include landscape improvements for a nearby highway ramp.

At an exclusive “casino party” last night, Philadelphia-based developer Bart Blatstein unveiled renderings for an enormous $700 million casino concept that could completely reshape North Broad Street, the city’s largest thoroughfare. Speaking at a banquet hall near the headquarters of Tower Investments, Inc., Blatstein’s development firm, he called the project “an entertainment resort” that would be “a game-changing development for Philadelphia.”

Philadelphia has only built one of the two casinos allowed by the state after Pennsylvania legalized gambling in 2004. Issuance of a second gaming permit is now being considered by state officials, and has generated substantial interest in spite of a $75 million price tag.

Blatstein is the latest high-profile developer to throw his hat into the ring, with the 120,000-square-foot “Provence Casino” plan that would transform the former Philadelphia Inquirer and Daily News complex. The former offices would house a 125-room hotel and table games, while former loading docks and a parking area would be expanded into additional casino space and a massive commercial area, topped with an extravagant French-themed rooftop “village” and indoor botanical garden. According to Tower, the project will create 5,300 permanent positions for casino workers, in addition to thousands of temporary construction jobs.

The plan has already raised ire from traditional opponents, like Casino-Free Philadelphia, who say Provence will result in increased gambling addiction and crime. But local architectural advocates and surrounding neighborhood organizations are also studying the impact of early plans from a design standpoint.

The Design Advocacy Group, a coalition of architects that lobbies for higher architectural and planning standards across the city, is concerned that the furor over social consequences of gambling will distract from the very real impacts this development could have on Philadelphia’s urban landscape. Kiki Bolender, chair of the DAG, said that while her group had not taken an official position on the project, she was already concerned with such an unusually large parcel falling under the domain of a single entity.

“It’s a huge amount of property under the control of one owner, for one group’s profit. It’s a very unusual thing in the city,” she said, noting that Blatstein also owns a nearby 300,000-square-foot former office building. That building, a former state office complex, along with the proposed casino site, bookends the city’s sprawling School District headquarters. With district reforms shrinking administrative staff down to only a few hundred, it is not outside the realm of possibility that school officials would seek to offload their outsized offices, giving Blatstein the opportunity to take control of the entire block.

Bolender worried that “some things of positive civic value would get thrown under the bus” during to the push to develop a singular plan for the megablock. She said that Philadelphia has a poor history of handling mega-developments like Provence, often ending up with designs that look good on paper but feel out of human scale in reality.

It appears from early renderings that retail would be concentrated on the rooftop-shopping village. Though Bolender dismissed the concept as an attention-grabbing feature that would probably never materialize, she said that similar internalization of retail, a common practice for many casinos, would ultimately harm street life.

“Is [Blatstein] really trying to create a quaint French village that’s within it’s own enclosure? Although he would never admit it… that would mean turning away from Broad Street,” said Bolender.

Others said the proposal, which is at the very least dense and ambitious, reflected the knowledge Blatstein had gained from his past developments. The developer is well known in Philadelphia for his immense “Piazza at Schmidt’s” development in Northern Liberties. The project originated as a proposal for suburban-style shopping plaza, but was transformed into a dense, mixed-use neighborhood center after intense community opposition forced Blatstein to modify his plans. Ultimately, he and his design team came up with the final iteration that satisfied many residents and is largely credited with cementing the position of Northern Liberties as one of the city’s most desirable neighborhoods.

Matt Ruben, president of the Northern Liberties Neighborhood Association, played a key role in presenting community input to Tower Investments during that development phase of the Piazza. He called the new casino plan “intriguing,” although he questioned how a French theme would mesh with the surrounding neighborhood.

“If you try to do something that is a revival of any style or tries to look old with new materials, I wonder, ‘is that going to look right?’” he said.

However, Ruben said that overall, he thinks that Blatstein had learned from his experiences in Northern Liberties.

“The starting point for this project, in terms of design, is way ahead of the Piazza,” he said. “It’s obvious that he has retained architectural talent and he’s learned from his recent years of doing development.”

Ultimately, of course, the project is based around gambling. Although sanguine on the design elements, Ruben personally opposes casinos and figured prominently in public resistance to Sugarhouse, Philadelphia’s first casino. While he now says that the negative impacts of that casino have been relatively minor, he still called casinos “the lowest common denominator in taxation,” and said he didn’t think the casino model of economic development was appropriate anywhere.

He recommended that the Logan Square Neighborhood Association, which covers the area where Provence will be located, start organizing.

“From what I understand there is already a coalition forming in that part of town. I think the first thing you have to do is join forces. You have to have a coalition and speak with one voice,” said Ruben, adding he was “cautiously optimistic” that Mayor Michael Nutter’s administration would play a more involved role in shaping the development in as equitable a way possible.

The Logan Square Neighborhood Association has not taken a position on the Blatstein development at this time.