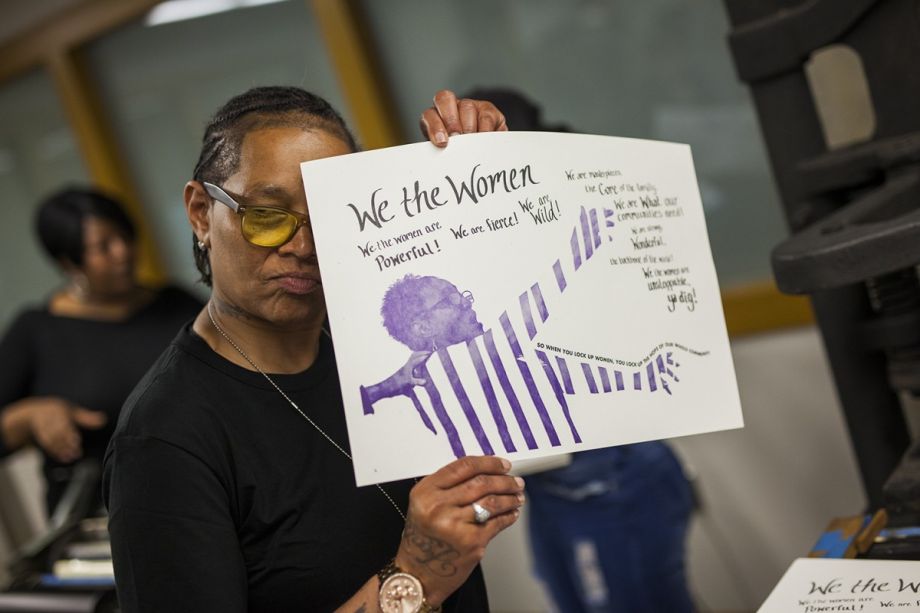 Before she spent a year in jail, unable to post bail, Latyra Blake did not think of herself as an artist. But at a pop-up exhibition at the University of Pennsylvania earlier this week, she was surrounded by artworks she made in collaboration with other formerly incarcerated women: posters, t-shirts, banners. All bearing slogans.

“Free Our Mothers, Uncuff Our Communities” is her favorite, printed with an illustration of three women, arms raised, open handcuffs at their feet. Blake is one of the women in the picture, joyful and free. She likes that it points out how entire communities are impacted when family members go to prison.

“We need to free women because the women hold the communities together,” said Blake. “They are truly the backbone to our world.”

Blake and her collaborators made the artworks as part of Women in Reentry, a project of the People’s Paper Co-op. Together, they’ve spent months learning to make paper from their own shredded criminal records, coming up with sayings that reflect their experiences behind bars, and then collaborating with artists across the country to turn their words and images into art.

And from art into action. Now, these works are on sale to raise money to bail out other Philadelphia area women for Mother’s Day.

The Black Mama’s Bailout is an annual national campaign that takes place every Mother’s Day. (The website clarifies that the term “mama” is used inclusively, to encompass cis, trans and gender-nonconforming people “who mother and care for their families and communities in various ways.”)

The Philadelphia Community Bail Fund, a volunteer group that agitates to end the practice of cash bail and raises money to post bail for Philadelphia residents who cannot afford it, has participated in the Mother’s Day action since 2017. The first year, they were able to free 13 women; the next year, 23.

Though Blake and other Women in Reentry collaborators marched to support the campaign and welcome home the women last year, this is the first time they’re selling original artworks to raise funds. Already, they’ve raised $13,000 towards the bail fund’s goal of $100,000. They’ll use it to bail out as many women as they can.

Blake will be there to welcome them, like she was last year.

“When the women came out of the prison, we were waiting across the street. And we welcomed them home, with open arms, cries, tears and enthusiasm,” she says. “We gotta fight and help each other.”

Blake knows intimately what a toll it can take to remain behind bars. She was arrested on conspiracy charges and incarcerated for over a year — without being found guilty — because she couldn’t post bail. Her four children, the youngest of which was just seven months old, went to live with their grandmother. Blake lost her home, all of her belongings were thrown into storage, and then she lost that too, when she couldn’t pay the bills. Finally, she took a plea deal, just to get free.

Today, Blake’s criminal record still haunts her, making it difficult to find housing, but she’s turned her energy towards helping other women in the same situation.

“You’re transforming your thoughts, you’re healing women, you’re fighting for something that’s right,” she says. “You’re trying to change laws, to better you and others. That’s a wonderful feeling, because you’re helping not just yourself.”

Over the past few years, the push to end cash bail has intensified around the country. Critics say the system penalizes defendants simply for being poor, keeping them locked up without a verdict, on the flimsy premise that otherwise, they will not show up for court. (Hence another of Blake’s favorite poster slogans: “It’s innocent until proven guilty, not guilty until proven innocent!”)

That’s how Kalief Browder, arrested in New York City in 2010 for allegedly stealing a backpack, ended up spending three years in jail waiting for trial: His family couldn’t afford the $3,000 bail. The charges were eventually dismissed, but Browder’s life had been irreparably damaged. In 2015, he committed suicide.

His story and others like it have fueled calls for reform. Last year, Philadelphia District Attorney Larry Krasner ended cash bail for certain low-level offenses, like prostitution and some burglaries. A year later, a report showed the reform seemed to be working: Short-term jail stays decreased, but defendants still showed up for their day in court.

Next door, New Jersey eliminated cash bail in 2017. Since then, reports have shown similar results: no spike in crime, recidivism, or failures to appear.

All of this is sparking hope among Philadelphia activists that cash bail will soon come to an end.

In the meantime, the Philadelphia Community Bail Fund and People’s Paper Co-op will be raising money to bail out as many mothers as they can — starting on May 12, Mother’s Day, and running until the money runs out. Blake and other Women in Reentry collaborators will welcome the women home with a pop-up art exhibition outside the prison.

“We use art because first and foremost, art has been part of every successful social justice movement in the history of the world,” says Mark Strandquist, co-founder of the People’s Paper Co-op with Courtney Bowles.

“We really believe that stories are the seeds of real change. So until people are seen as fully human, laws, social services, programs and policies will never reflect their full humanity.”

Women in Reentry fellows share those stories through their art and their activism. Two days after the bailout, on May 14, they will celebrate with a parade in Philadelphia, culminating in the 3rd Annual Women in Reentry Day rally and call to action around ending cash bail.

Antoinette Carter, another Women in Reentry collaborator, says being able to turn her creativity into bail money for other women means everything to her.

“My art and my support and my resources is going to help these women when they come home,” she says. “You should have seen me when I got home, I wanted to kiss the ground.”

Carter served five years for a crime she admits she did commit. Through the program, she says she has improved her relationship with her mother and her wife. And she’s explored new parts of herself. At first when her wife suggested she apply to the program, Carter didn’t know if she could make art. But her perspective quickly changed. “Everything you do, it is art,” she says today, showing a poster she made.

It’s about the three years parole she was sentenced to after her release, another practice she says can unfairly punish people caught up in the criminal justice system. On the poster, there are two photos of Carter, back to back. In one, she’s dressed in a blazer, ready for work. In the other, she’s in an orange jumpsuit.

“I did my time, don’t make me feel confined,” it says. “Parole feels like double jeopardy.”

Carter’s still on parole. She says even when she’s trying to move forward with her life, her criminal record is always there, beside her. “That’s my past, I did my time already, why do I have to feel confined?”

The Women in Reentry program takes fellows twice a year. Participants are nominated to join, or hear about it through reentry programs, like halfway houses. It’s a paid fellowship, so the women are compensated for the two days a week they spend making artwork and participating in conversations about conflict resolution and other skills they need on the outside.

Posters and t-shirts are available through the People’s Paper Co-op, and donations can also be made directly to the Philadelphia Community Bail Fund.

Tags: philadelphia, prisons, for whom by whom, returning citizens