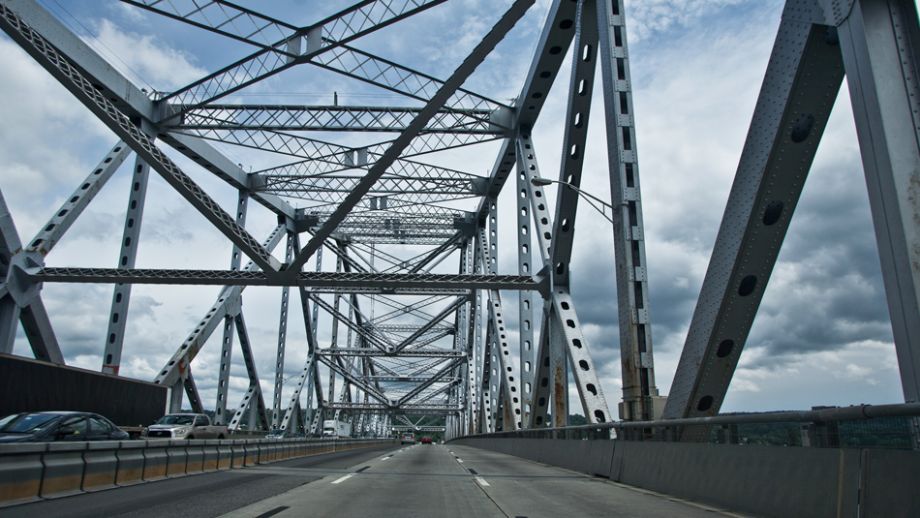 What happened to the Tappan Zee? In Forefront this week, Graham T. Beck looks at why New York Gov. Andrew Cuomo last year suddenly fast-tracked a plan to rebuild the massive Tappan Zee Bridge, scrapping a decade of community planning and forgoing a once-assumed mass transit component. Beck explains how the bridge’s undoing reflects trends in infrastructure development that threaten to undermine the country’s movement toward sustainability.

At George Sherman’s house, near the end of Salisbury Place, you’re so close to the Tappan Zee Bridge that you have to turn your head to see the whole thing. With the windows open, you can smell the bridge — a sweet mixture of river water, metal and exhaust. And when traffic thickens along the three-mile, seven-lane span that carries the New York State Thruway across the Hudson River just 25 miles north of New York City, you can hear the honking and the chorus of idling engines and the wheels of tractor trailers.

None of that is a problem for Sherman. The Tappan Zee Bridge opened in 1956, long before he bought a house in its shadow. Over the years, he has grown accustomed to the quirks and fond of the views. The same is true for his neighbors in the village of Nyack and the folks on the other side of the bridge, in the railroad suburb of Tarrytown. They’ve learned to live with, and even appreciate, the monumental structure as much, if not more, than the 135,000 drivers that cross it each day. So when the state announced a plan to address congestion on the bridge, and along the highway corridor that leads to it, Sherman and his neighbors on both sides of the river were quick to get involved.

That was 15 years ago. Some 280 public meetings and $88 million later, officials in Albany had a pretty good idea of what they needed to do: Build a bigger bridge with mass transit facilities. The new transit would connect a commuter rail line that runs along the east side of the Hudson River with residential villages and commuter-trafficked office parks along the30-mile corridor that runs from Suffern to Port Chester. The surrounding communities and active participants like Sherman, who sacrificed thousands of hours and hundreds of evenings weighing in on the plan, felt fairly comfortable with what was to come and the years of construction it would take to make it a reality.

Then, with a short press release and a quick news conference, everything changed.

In October 2011, Gov. Andrew Cuomo and the New York State Thruway Authority unceremoniously scrapped over a decade of studies and community planning in favor of a fast-tracked bridge plan without a mass-transit component or broader corridor improvements. This new Tappan Zee could now go from the drawing board to the riverbed and up into the sky in a few short years. It will cost significantly less, the state has said, and it will create jobs now, Cuomo has promised.

But at what cost? By drastically altering the scope of the project, streamlining the review process, shrinking public comment periods and jettisoning other staples of America’s mega-project construction procedures — procedures that communities around the country have come to rely on and revile (in equal parts, it seems) — the Cuomo administration has alienated a number of local elected officials, advocates and neighbors like Sherman. People are worried that what’s to come will be obsolete and obtrusive even before it opens.

“Without transit on the bridge, we’re going to be stuck with infrastructure that doesn’t sustain mobility or economic growth in the region,” said Veronica Vanterpool, executive director of the Tri-State Transportation Campaign.

Observers from farther afield should take notice, too: What happens with the Tappan Zee Bridge — particularly as it follows so closely on the heels of New Jersey Gov. Chris Christie’s sudden decision to abandon the ARC Tunnel to Manhattan — could be a bellwether of mega-project construction for years to come. With budgets shrinking and state and municipal economies at center stage, it seems the rationale for infrastructure investment is transforming. Increasingly, factors like the upfront cost of a project and its capacity for near-term job creation are gaining importance when measured against more traditional long-term goals like development patterns, commuter habits and even regional economic impacts. With a $5.2 billion price tag, a few high-profile players and a constituency that’s as concerned with long-term sustainability as it is with jobs and costs, the Tappan Zee Bridge, and the particular route it takes to get wherever it ends up, will set a course that others around the country are likely to follow.