Low-Income Smartphone Users Want an App for That Too 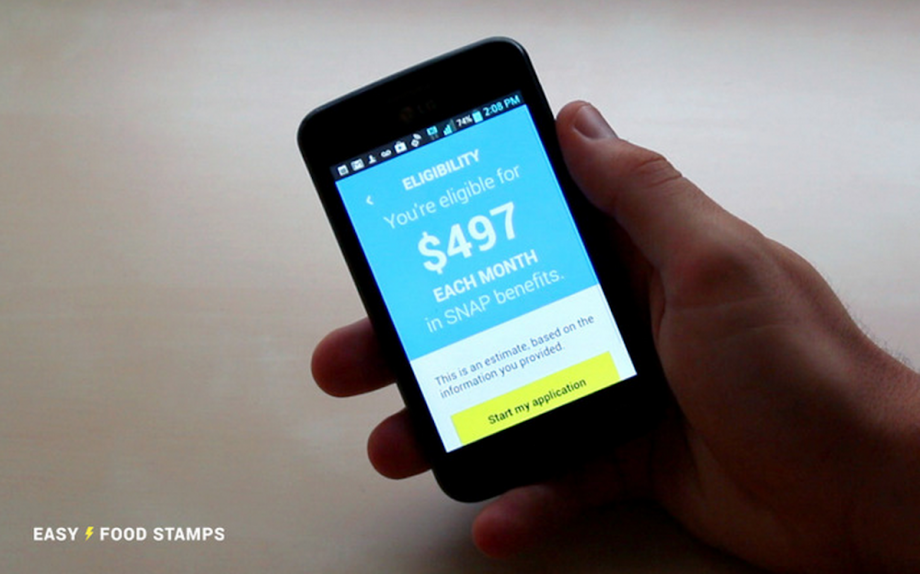 Jimmy Chen says that one of the reasons that apps and “life hacks” tend to solve the problems of the wealthy is that “people tend to build technology that solves their own problems.” Chen, a fellow at tech accelerator Significance Labs, continues, “[There’s] a disproportionate amount of technology being built that solves the problems of young, urban technologists.” The Brooklyn-based Significance Labs was founded this year to support startups and mobile apps that serve the needs of the 80 percent of low-income Americans who own smartphones.

Previously a product manager at Facebook and LinkedIn, Chen spent the first few weeks of his fellowship in conversation with community groups and low-income residents in New York asking about their challenges and brainstorming how their daily lives might be improved through the use of technology.

The product that he and his Propel team designed in response was Easy Food Stamps, a mobile-friendly website that simplifies the application process for the Supplemental Nutrition Assistance Program (formerly known as food stamps) in New York State.

“We’ve all been annoyed at some point by navigating government services like waiting in line at the DMV, or filing taxes or applying for a passport,” says Chen. “For low-income Americans, it’s no longer just an annoyance, it’s a necessity. The system, despite being more important for these Americans, isn’t any easier for them.”

“At the beginning, Jimmy was looking at a wide swath of government services and processes,” says Bill Cromie, one of the co-founders of Significance Labs. “He and his team applied to a bunch of government benefits, trying to hone down — just in the minimum viable product sense — which was the service that had the most onerous process and simultaneously, the most positive outcomes.”

When you pull up Easy Food Stamps on your mobile phone, the “digital social worker” asks you a few key questions from the paper application. It also prepares you for questions for the in-person SNAP interview, and can fax in documents to SNAP on the user’s behalf taken from photos on your phone.

Chen says that the existing organizations who assist people with their SNAP applications are “primarily doing it through pretty analog means.” He adds, “We think that’s great for a lot of people, but the analogy that I use is that when you have to file your taxes, there’s the physical H&R Block office you can go to and then there’s TurboTax, which you can use at home.”

Joel Berg, executive director of the New York City Coalition Against Hunger, an organization that has provided assistance to thousands applying for SNAP benefits, is concerned that the pre-screening done by Easy Food Stamps doesn’t include some critical questions, such as immigration status or how much money applicants currently have in the bank. If eligibility screening isn’t thorough, some people might spend time applying through the app with little chance of being approved. The Coalition Against Hunger is also in a partnership with the New York City Human Resources Administration, something Berg says could improve Propel’s high-tech approach.

“Applying for these benefits is more challenging than paying your taxes,” says Berg. “It’s an important thing to try to do, but the way that most state social services systems are, I very much doubt that an app like this could work without an actual partnership with the state. It’s like helping someone to get an American Express card without involving American Express.”

Chen acknowledges that Berg’s feedback is legitimate. “We’re looking to correct that right now,” says Chen. “About the eligibility calculations, those aren’t actually things that we input into your application. We think that we can calculate the potential eligibility for the majority of people. Later on, when you are actually doing the application through the app, we ask [those questions].”

In the meantime, Chen and his team are already planning on developing another iteration of the app for Pennsylvanians. SNAP is a state-administered program, so the team at Propel would need to create 50 different versions of their product to complete their goal of servicing all Americans.