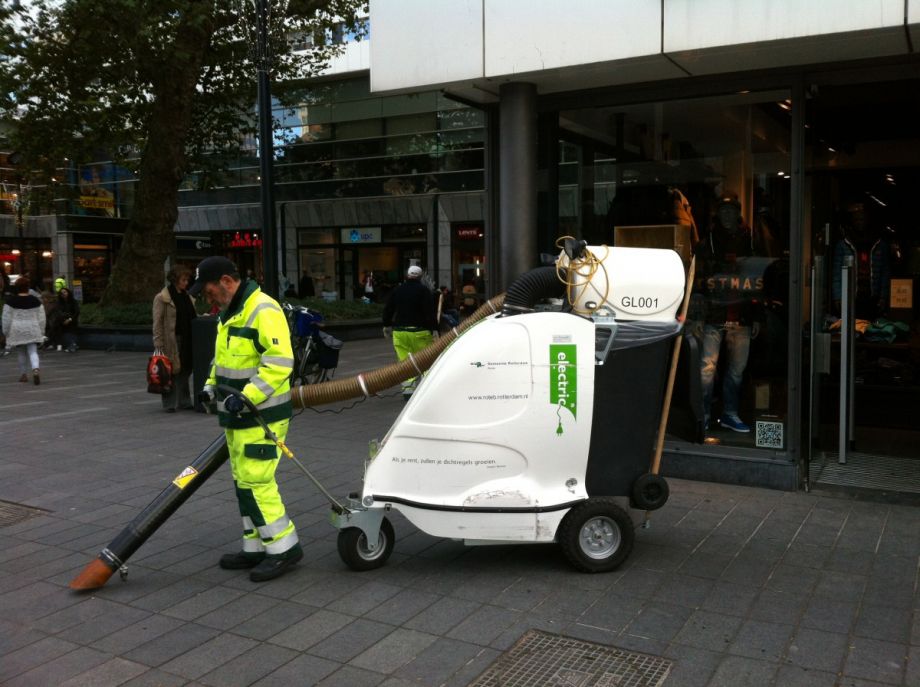 “A nice weekend away,” we thought. After maneuvering through Rotterdam’s delightfully mixed traffic — cyclists with babies in front and back, trams hurtling along their tracks, buses in designated lanes and the occasional rumble of the metro beneath the city — we finally hit the highway. We slipped down the entrance ramp and directly into the roar and chemical stench of a traffic jam. “There is an eight kilometer-long traffic jam on the A20 at this moment,” the radio gently informed us. I looked over at my husband, who was rolling his eyes in exasperation. “We should have taken the train.”

Most people think of Dutch cities as cozy paradises of bikes and pedestrians. And they generally are — with the exception of Rotterdam, which was rebuilt in the aftermath of World War 2 in the mold of an auto-friendly city. Inspired by modern American cities, the new infrastructure was designed around the car: broader than the cramped canal-like streets of Amsterdam with underground parking garages at strategic points. Today, parking permits for residents are cheap and readily available (unlike in Amsterdam, where the current wait list is up to four years). Even in the midst of an economic crisis, parking garages in Rotterdam offer one of the safest returns on investment for local developers.

Rotterdam’s car-friendly reputation has a lot to do with its character as a working-class city. It prides itself on its blue-collar roots, an identity formed, in part, as a reaction to its proximity to more-glamorous Amsterdam. And yet, the net effect of all these “car friendly” measures is that Rotterdam now hosts the most traffic jams in the country. Almost every morning, cars idle at a standstill along the A20, a major highway running along the city’s northern edge. Rotterdam is facing a serious problem: How to mitigate the negative effects of heavy traffic in a city that loves its cars?

A charging station installed by the city.

One answer, according to Rotterdam alderman Alexandra van Huffelen, is electric vehicles. As she sees it, if Rotterdammers insist on driving everywhere, they may as well drive greener cars. One of the city’s main concerns has been getting information about EVs to the public. Although they exist in the popular imagination as the car of the future, electric vehicles actually pre-date gas-powered engines. Thomas Davenport’s 1834 model was the inspiration for electric streetcars. Since then, electric vehicles have come a long way: the sleek Tesla Model S can run 480 kilometers on a single charge — a distance that would easily get you from Rotterdam to Paris without stopping for a top-up. And the cost? About €18 ($24) for a full charge.

“Once you ride in an electric car you think, hey, I want this,” says Lutske Lindeman, program manager of Electric Transport for the City of Rotterdam. “So we just have to get more people to experience it.” That’s precisely the goal of the one-of-a-kind “Electric Transportation Center” (Het Nieuwe Rijden | Electrische Vervoer Centrum – EVC). Located next to Central Station in downtown Rotterdam, the EVC offers test-drives, information and recommendations for interested individuals and companies. From the sleek, handmade, carbon-fiber Tesla Roadster (€101,900) to the somewhat bug-like Renault Twizy (€7,690), the EVC’s fleet reflects just how diverse the electric vehicle market has become.

For many drivers, this availability comes as a surprise. Electric cars come in a variety of price ranges and styles, are much cheaper to drive and can be completely energy-neutral if the electricity comes from a green source. So why aren’t they more popular? For one thing, “range anxiety” — the fear of running out of battery power during a trip. In most cities, charging stations are still few and far between. And charging takes much longer than a trip to the gas station; a 220/240-volt charging dock can fully charge a car in 3.5 to 8 hours, depending on the model. In the United States, lots of electric car owners simply plug in their vehicles while they sit in the garage at night. In Rotterdam, owning a garage or even a private parking space is almost unheard of. Here, then, it becomes the responsibility of the city government to secure public space for charging stations.

Rotterdam’s charging points are mapped out for EV owners online.

As Lindeman points out, the infrastructure requirements for the planned shift to electric vehicles have already produced some hiccups. “Some people don’t like the charging poles because they are unfamiliar with electric transportation and there have been some complaints about public parking spaces being converted to charging stations.” Every grumble is carefully considered by the municipality, but their focus is generally on informing the public about the universal benefits of electric transportation. “It’s good for everyone: less pollution, less noise, less taxes, lower costs — and maybe you yourself will be charging a car there in a few years. So what we try to do is explain, explain, explain.”

There are currently 500 charging stations in Rotterdam according to Lindeman, and the city has big plans to increase this number. The goal is to have more than 1,000 charging points in place by 2014 and to increase the number of electric vehicles on the street to 200,000 by 2025. To facilitate this increase, the municipality is subsidizing the installation of 1,000 charging points for anyone who buys an electric vehicle: up to €1,000 for a charging point at a private parking space if the car owner has one, or if not, the city will install a public charging point within 250 meters of the car owner’s home. In addition, the city already has electric trash collection vehicles, four hybrid buses and a number of electric scooters for public transport. Rotterdam’s fleet of city-owned vehicles is now 21 percent electric or hybrid.

For me personally, the concept is environmentally and fiscally appealing. The city grants to EV owners free parking permits for a full year, exemption from road taxes, a zero percent buying tax (which can be up to 25 percent in the Netherlands) and no extra costs for company cars. For the city of Rotterdam, the benefits are also obvious: electric traffic improves air quality and reduces noise pollution, and the use of locally produced green power contributes to the city’s self-sufficiency. While we may still be sitting in bumper-to-bumper traffic ten years from now, the municipality is counting on the fact that those future traffic jams will be quieter, cleaner and just about energy neutral — something to smile about while drumming the steering wheel in frustration.