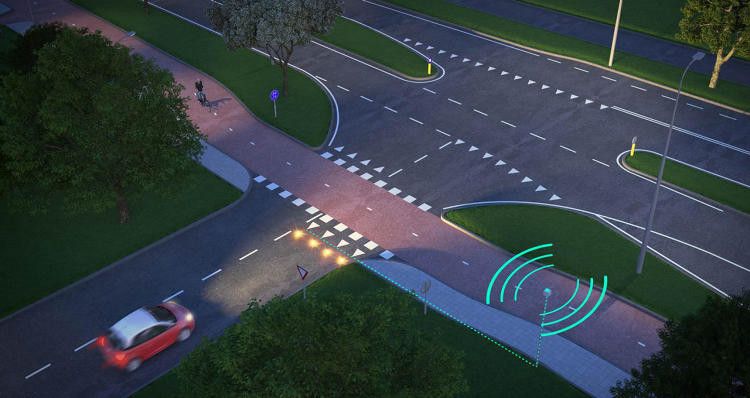 A rendering of the BikeScout system (Credit: Heijmans)

A city in the Netherlands, a place frequently cited for its progressive bike infrastructure, recently got even more safety conscious. Eindhoven installed flashing LED lights at several street crossings to alert drivers to approaching cyclists.

The new technology, called BikeScout, tracks the speed and location of both cars and oncoming cyclists or runners with radar technology. If there’s a risk of collision, it flashes LED lights embedded in the road at the driver.

Fast Company reports that the first official system was installed at a particularly crowded intersection in the Dutch city in March. Local traffic control can monitor BikeScout through an app, and use the data recorded from the system to help with future planning.

Joziene van de Linde, the managing director of technology at Heijmans, the company that designed BikeScout, told Fast Company that the tool would be even more helpful in regions where biking is less common and drivers aren’t as used to yielding to bikes.

“What we see is that even though the Netherlands is quite a safe country in terms of traffic safety, we still have a need to improve on that, specifically on intersections,” van de Linde says. “Added to that, we see more and more electric bikes, so speed differences between different cyclists are actually increasing, and not all drivers are aware of those differences.”

Though bikers in Eindhoven say they feel safer at the intersection now, the high cost of the system will likely keep it from becoming the norm quickly. The first BikeScout system cost close to 40,000 euros (about $43,000 U.S.) to install, and will cost another 1,000 euros ($1,100 U.S.) each year in upkeep.

See the system in action here: