Driverless Tram Will Get Debut Spin in Berlin – Next City

Driverless Tram Will Get Debut Spin in Berlin 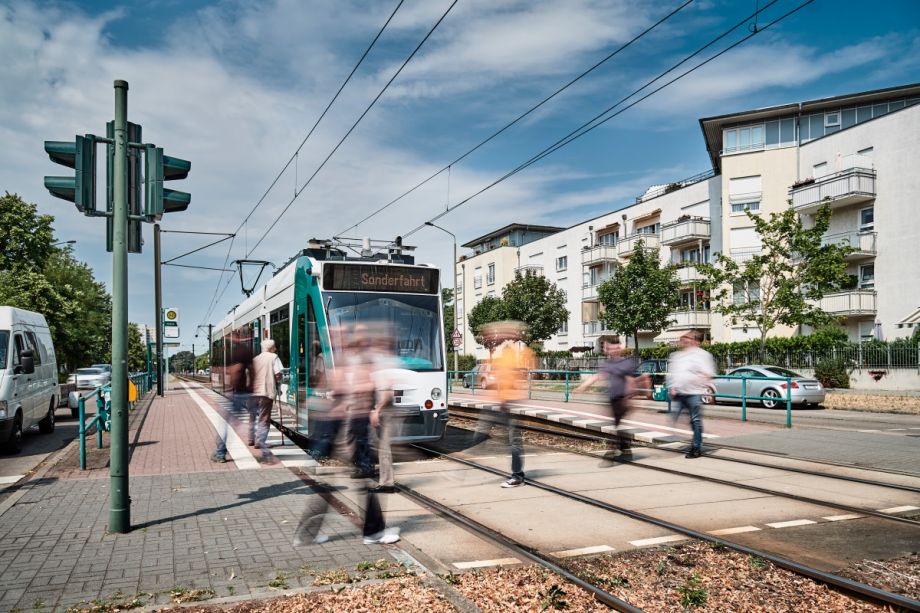 Siemens' autonomous tram will get a run in Berlin this month. (Credit: Siemens AG, Munich/Berlin)

Driverless Light Rail Vehicle to Make Demonstration Run in Potsdam This Month
Driverless rapid transit trains have been around for decades. But driverless streetcars, like driverless cars, remain a technology in development. And now, as has been taking place for a little while with driverless cars and buses, the technology has advanced to the point where it’s ready for some real-world testing.

The International Railway Journal reports that railcar manufacturer Siemens and the transit authority of Potsdam, Germany, will put an autonomous light rail vehicle (LRV) through its paces on a four-day demonstration run during InnoTrans, the biennial international transportation technology trade fair that takes place at the nearby Berlin ExpoCenter this year Sept. 18-21.

According to a Siemens press release, the vehicle is a Siemens Combino LRV that has been outfitted with multiple cameras, radar and lidar sensors that will deliver information about the vehicle’s surroundings to an onboard computer that functions as the vehicle’s “brain.” The computer performs complex algorithms that spot hazards in the vehicle’s path and determine the appropriate response, such as stopping for a wayside signal, stopping at a platform to pick up or discharge passengers, and braking for crossing pedestrians and vehicles.

The LRV will make its debut test runs in mixed traffic on a 6-km (3.73-mile) stretch of Potsdam’s tram network. A longer report on the trial on the news site Smart Cities Dive states that the vehicle, which was built solely for testing purposes, builds on existing autonomous train technology Siemens has developed. The longer reaction times and stopping distances trains require have slowed the development of autonomous vehicle technology on the rails, according to the report.

Crossrail Tunnel Opening Pushed into 2019
Parts of London’s future Elizabeth Line are now being run by Transport for London (TfL), but delays in outfitting and implementing software for the central Crossrail tunnel will push the line’s full opening date from December 2018 to the fall of 2019, according to a news item in Metro Report International.

London’s Crossrail tunnel “is one of the most complex and challenging infrastructure projects ever undertaken in the U.K.,” says the exec leading the project. (AP Photo/Lefteris Pitarakis)

In announcing the delay on Aug. 31, Crossrail Ltd. said that full operations on the Elizabeth Line from Reading and Heathrow Airport in the west to Abbey Wood and Shenfield in the east would begin “as soon after the central tunnels are open as possible.” TfL is currently operating service on the above-ground former mainline rail routes that will feed the central Crossrail tunnels from Paddington to Stratford and Woolwich. An additional underground spur will serve stations at Heathrow Airport.

“The Elizabeth Line is one of the most complex and challenging infrastructure projects ever undertaken in the U.K. and is now in its final stages,” Crossrail Chief Executive Simon Wright told Metro Report. “We are working around the clock with our supply chain and TfL to complete and commission the Elizabeth Line.”

The decision to go ahead comes at the end of a two-year feasibility study. The 11-mile line, whose route has been revised since an earlier study was finished in 2016, will connect neighborhoods along the East River waterfront in Brooklyn and Queens that are far from the city’s subway system. The neighborhoods the line will serve on its run from Astoria in Queens to Gowanus in Brooklyn include Queensbridge, Long Island City, Greenpoint, Williamsburg, Brooklyn Heights and Red Hook.

The study concluded that existing wireless power supply technology could not support the amount of service the line is expected to provide, so 750-volt overhead DC catenary will be built instead. About 50,000 passengers are expected to use the line daily; trains will run at 5-minute headways during peak hours, 10-minute headways off-peak and on weekends, and 20-minute headways overnight starting at 11 p.m.

The project’s estimated price tag has risen from $2.5 billion to $2.73 billion, which includes $145 million for purchase of rolling stock. The city expects the federal government to pick up $1 billion of that tab. Construction will begin in 2024, and the line should open in 2029, five years later than originally planned.