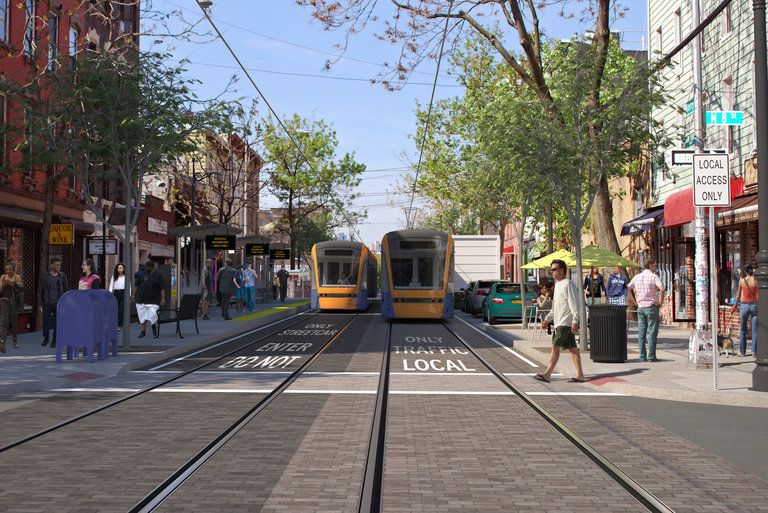 A rendering of a proposed streetcar running on Berry Street in Williamsburg, Brooklyn (Credit: Parsons Brinckerhoff)

Crain’s New York Business reports that the proposed rail transit line connecting underserved parts of Brooklyn and Queens will miss the target date for starting the public review process for the line, which was set for the end of this year. The delay stems from the New York City Economic Development Corporation’s decision to continue studying the line’s feasibility.

And the reason the EDC is continuing its feasibility study is because moving the tangle of utility lines beneath the streets could add up to a billion dollars to the project budget, moving it out of the realm of the feasible.

“There’s about a billion-dollar swing one way or another depending on the level of utilities that are under the ground,” EDC head James Patchett said in April at a Crain’s conference.

The report notes that while taking the time to do a deeper feasibility study would save the city $35 million if it scraps the proposed line, the delays in the project timetable could add as much as $100 million to the project budget if it proceeds.

All Aboard at Last in Aarhus, Denmark
Okay, we can all exhale now. The hapless light-rail line in the Danish city of Aarhus finally opened for revenue service on Dec. 21.

The International Railway Journal reports that Denmark’s Transport, Housing and Construction Authority signed off on the required safety certification on Dec. 20 and that revenue service began without fanfare the next day at 10:15 a.m.

That stands in contrast to the pomp and ceremony planned for the original opening date of Sept. 23. The hoopla was canceled the day before when central government officials refused to approve operator Keolis’ safety certification, leaving egg on the faces of owner Aarhus Letbane’s management.

Since then, trains have been ghost running on the line according to the timetable, logging more than 100,000 km (62,137 miles) of non-revenue service. The startup delay even became an issue in recent municipal elections.

The initial segment runs 12 km (7.5 miles) from Aarhus Central Station to Skejby University Hospital. Future extensions are already in the works. Presumably there won’t be problems with their safety certifications.

Melbourne Takes Another Step Toward “Turn-Up-and-Go” Train Network
The Victoria state government was in a celebratory mood after awarding the last of the several contracts for construction of the metro tunnel through downtown Melbourne, Global Rail News reports.

“We don’t just talk about building the big roads and public transport Victoria needs — we’re getting it done.”

Preliminary work on the project to add capacity to Melbourne’s regional rail network is already underway. Actual construction will begin next year and should wrap up in 2026. The project will create 7,000 construction jobs, and when complete, trains will be able to run through the tunnel at two- to three-minute intervals thanks to high-capacity signaling being used for the first time on an existing Australian rail network.