“Do We Look Like Slumlords to You?” – Next City 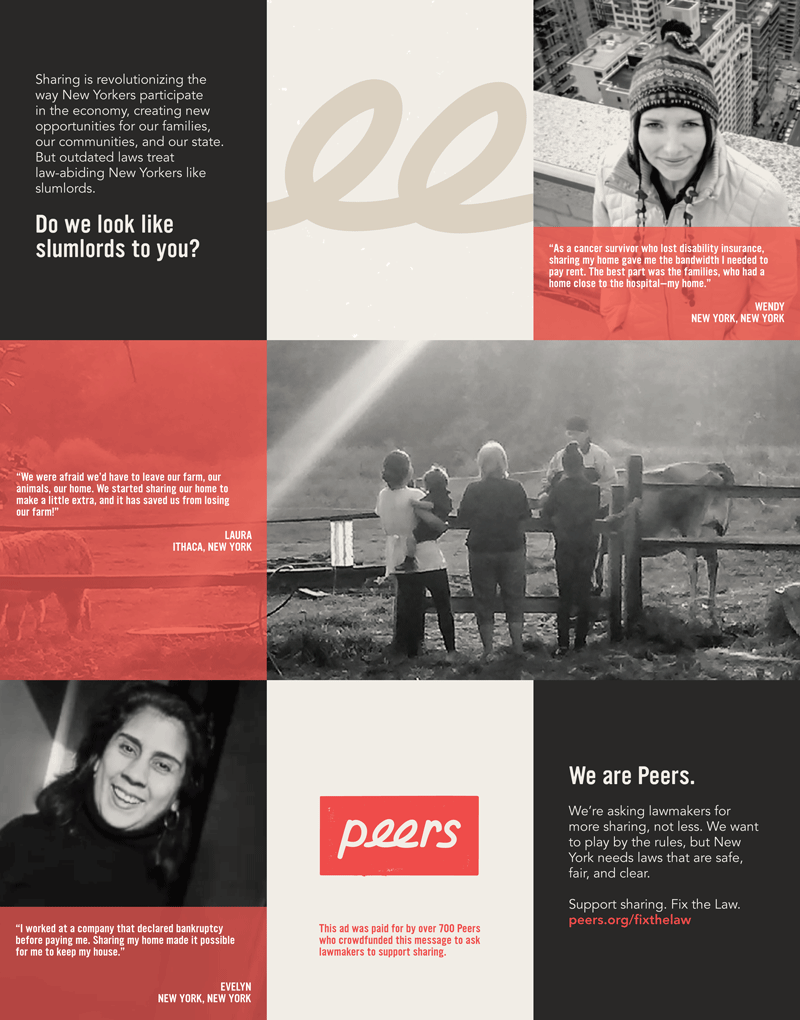 Peers.org, the organization that launched last July to organize folks engaging in the “sharing economy,” has been raising money online to run an ad in the current issue of City & State. The reason for targeting that publication isn’t because of cheap ad rates — instead, Peers is aiming for the ‘train to Albany’ read of New York state lawmakers. That’s in part because New York State Attorney General Eric Schneiderman has been attempting to add Airbnb to a growing list of technology concerns whose business practices, he argues, need a check from the state’s top lawyer. (“Homesharing,” Peers would rather we call the practice.)

Peers raised an average of $12 apiece from 700 people for the advertisement, which is fitting for an organization dedicated to proving that the sharing economy is a project of, for and by the grassroots. But it’s interesting to see how Peers otherwise frames its place in the world. As recently as 2010 Albany passed a law, championed by state Sen. Liz Krueger, restricting short-term rental tenancy to cut down on boarding houses in her upstate district. Krueger isn’t a tremendous fan of Airbnb, having called the company “irresponsible and greedy.” But Peers is betting that Krueger’s colleagues might be more amenable to its arguments once they get to know real-life Airbnb hosts.

To that end, the ad attacks Krueger’s prime objection first. “Do we look like slumlords to you?,” reads the ad, and the cute Nepali cap on the woman in the accompanying photos hurries one along to conclusion that, no, she doesn’t. But from there the ad picks on something that may well prove to be Airbnb and its ilk’s strongest argument as it moves forward. One panel tells the story of a cancer survivor whose Airbnb experience not only helped her cover her bills in a trying time, but also helped other families in similar situations be close to the hospital, presumably at a discount. That sort of tale of small business owners strengthening their wallets, strengthening their communities, and extending their compassion is ready-made for legislative testimony, should “homesharers” in knitted caps every get a chance to deliver it.