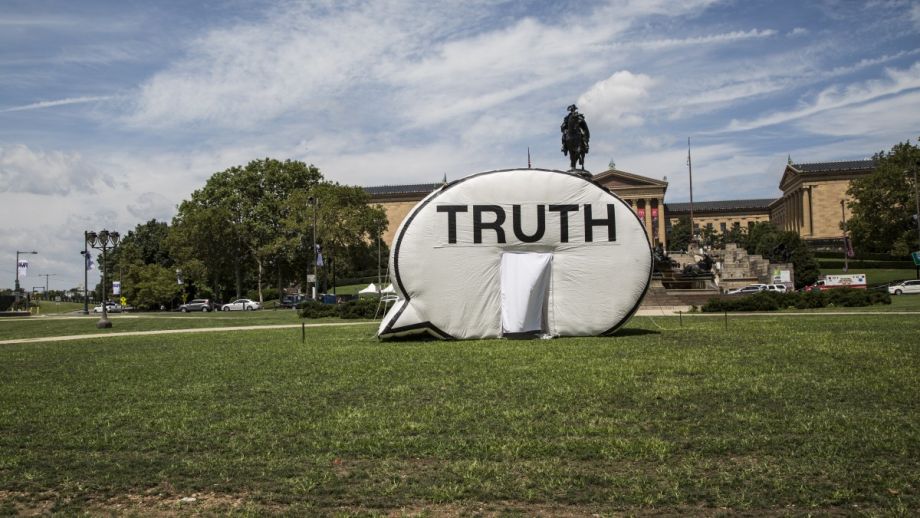 The Truth Booth in front of the Philadelphia Museam of Art. (Credit: Cause Collective)

Downtown Philadelphia is busier than usual this week. The Democratic National Convention is here and along with it, delegates, politicians, journalists and other public figures from cities all over the U.S and abroad.

Inside the guarded confines of the convention, the loudest voices are hard at work attempting to unify the Democratic Party for one final presidential vote.

But outside, chanting voices spread a different message. On Tuesday, protesters gathered outside City Hall with “Bernie or Bust” and “Hill No” signs, their bikes decorated with paint and their faces adorned with determination. Some demonstrators wore tape over their mouth that read, “Silenced.”

Artist Hank Willis Thomas says this is a good reason to look for his Truth Booth.

“The problem is when politicians speak for us,” says Thomas. “The only person that can speak for me is me. That’s something we’re trying to point out.”

In the sweltering heat, the Truth Booth, an inflatable video confessional in the shape of a cartoon speech bubble, takes an hour to set up. It’s a collaborative project of Cause Collective, a team of artists, designers and ethnographers who work in the public realm. Thomas worked with artists Ryan Alexiev and Jim Ricks on the installation.

“It came out of a necessity to democratize this thing that is so contentious, which is the truth, realizing that we all have perspectives, different versions of it,” says Thomas. “It’s an invitation for people to share their unique perspectives about the things most important to them in life or that are happening in our time.”

When the curious wander over to the giant white speech bubble, volunteer Helen Banach tells them how it works.

“It is a giant, inflatable, international public art piece,” Banach says. “We are on an American tour to collect the truth. We ask people to come in and record a video starting with ‘the truth is…’ and you can say whatever that means for you for up to two minutes.”

So far, the Truth Booth has been to 13 American cities collecting video from anyone who want to have their voices heard. Previously, the Truth Booth was in Cleveland for the Republican National Convention. The mobile speech bubble also been to Afghanistan and Ireland.

Banach has followed the Truth Booth to every city so far.

“No matter where you go people are going to have truths to tell,” she says. “People take away that we’re all kind of scared and fighting and loving all in the same way and you get to hear that from somebody else’s mouth, whether that’s west Baltimore or Princeton, West Virginia, that the human condition is very universal.”

Tuesday it sat in front of the Philadelphia Museum of Art and the Washington Monument at Eakins Oval. The next locations are at Independence National Historic Park, another tourist-heavy attraction, and Eight and Diamond Recreation Center in North Philadelphia, far from the downtown crowds.

The Philadelphia Mural Arts Program partnered with the Truth Booth to help pick the locations, a decision that is just as important as the prompt itself.

“I think having it in public is part of the freeing aspect of communication,” Banach says. “It’s in a place that’s accessible to everyone. Theoretically everyone can come and share their voices if they wanted to. Sometimes we’ll be in a museum space, sometimes we’ll be in a library. But in a public park, you get different crowds.”

Lesley Haas had been waiting for the Truth Booth to come to Philadelphia ever since their American tour began. “I think it’s very clever,” she says. “I’d like to see some truth flags hang all over the city and have people talking about it. It’s important for people to speak their truths and not be censored […]These politicians can shout all their hostilities and pull those white hoods over their heads. They need to sit down and shut up. It’s our turn.”

While some of the art involves gathering the responses, the other half is sorting through it.

“One of the miracles of the project is finding opportunities through watching the clips to relate to people who I would assume based off of a service reading that I’m, quote, different from,” says Thomas. “It’s really about giving people an opportunity to speak as well as listen and learn from people who we think don’t have anything to teach us.”