Detroit: Brewster-Douglass and the Urban Swamp – Next City

Detroit: Brewster-Douglass and the Urban Swamp 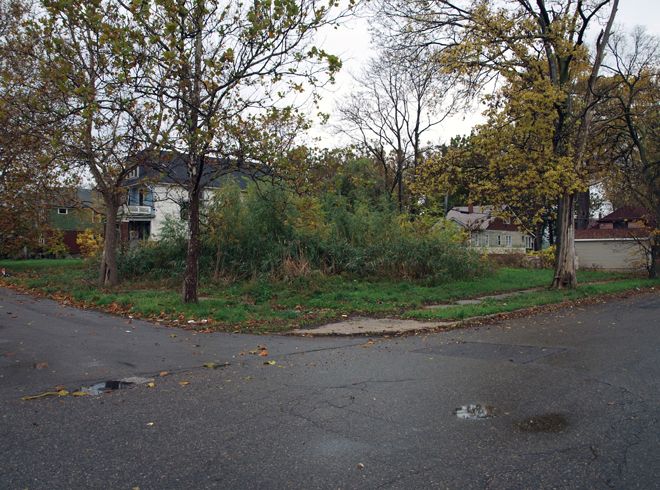 A swamp grows out of what used to be a basement on Detroit’s East Side. Clark Mizono

Next time you’re in Detroit, skip all the other tourist attractions, and take a walk up Woodward Avenue, away from downtown. You’ll pass the grandiose Fox Theatre, with winged lions on the marquee, across the street from that you’ll see new Tiger Stadium, with its massive stone tigers, cheesily perched all around the grandstands. Keep walking and you’ll pass all the empty Red Wings bars, which, like the stadiums, lie fallow on all days other than gameday. Keep walking another couple blocks and you’ll cross I-75.

Standing on top of I-75, so close to downtown, you might wonder if there had been a neighborhood here in the past. You would be right. As a matter of fact, as recently as the 1950’s, Detroit’s most prominent black neighborhoods, Paradise Valley and Black Bottom—the latter named for the color of its rich soil, by the way—were thriving neighborhoods, with black-owned businesses and a vibrant live music scene. But modernization and Urban Renewal were the name of the game back then. So in 1958 the Chrysler Freeway was dropped right in the middle of what had been a functional urban neighborhood, leveled in the name of efficiency.

From your vantage point above I-75, if you look North, you will see four high-rise towers of a housing project—not a surprise in any large American city. But these towers are special for a couple of reasons. The site—though not the buildings themselves—is where the first federally-funded housing project was built. It broke ground in 1935, and Eleanor Roosevelt did the honors. It has since been replaced by townhomes, and the nearby towers went up about a decade later.

Now, only a few short decades later, the towers and the townhomes are both completely vacant, in the official sense. They kind of just sit there, whistling in the wind. The towers have been picked clean, more or less, and emit random knocks when the wind picks up, and dangling wires and debris get blown around the upper floors of the buildings that raised Motown legends like Diana Ross. As for the townhomes, you can still see the magazine clippings tacked to teenagers’ bedroom walls on the upper floors of the houses where fire blight or vegetation has not completely taken over. The city can’t afford to tear them down, or really even fence them off properly. It’s hard to imagine a place that better encapsulates the failures of federal urban policy from yesteryear, and present-day, so well.

What is more striking, however, is the neighborhood adjacent to the Brewster-Douglass homes: Brush Park. In the late 19th century, Brush Park was Detroit’s most desirable address. What remains of the gorgeous brick Victorian mansions attest to that. There are hardly any mansions left in Brush Park, and many are collapsing in on themselves. One mansion bears a sign promising a Brush Park Historic District, brought to you by Mayor Kwame Kilpatrick, who is currently in prison on obstruction of justice charges.

The Brewster-Douglass homes and the I-75 may have only replaced one or two neighborhoods, but its presence can be felt from blocks away.

I met up with Next American City Vanguard member Sam Butler, who works for the Detroit Vacant Property Campaign, at the Grand Trunk Pub in Downtown Detroit, also on Woodward Avenue. He was there to talk to me about the $10,000 price tag on home demolitions in Detroit — the city is using Neighborhood Stabilization Program funds to demolish a backlog of 3,000 blighted structures — and help me understand what Detroit plans to gain by demolishing homes with federal dollars allotted to deal with the foreclosure crisis.

As for the price tag, there were two things that make demolition expensive: asbestos abatement and basement removal. The second I hadn’t heard about before, or really considered, probably because of my California upbringing. In fact, when deconstruction contractors get lazy or are rushed, Sam told me, they just push dirt into the basement instead of digging the concrete out, which can create a feature of urban ecology that is (hopefully) unique to Detroit: the urban swamp.

Sam directed me to the corner of Kitchener and Essex streets, on Detroit’s East Side, where there is now a mini-swamp or bog, roughly the contour of a basement to a house that no longer exists. Cattails and other weeds grow about head-high, out of mud so sticky that I had to ditch my Vans for the remainder of the trip. Remnants of what looked like front-end loader tracks led away from the house to the street adjacent. The way the vegetation grows, upwards out of the basement, forms a sort of grotesque version of what used to stand there. In the center, at its highest point, it had almost grown a whole first-floor, I’d say.

The urban swamp struck me as a funny, but sad counterpoint to the supposed panacea offered by urban farming. Can you imagine growing food for people to eat in plots of land with lead paint chips, asbestos, and old copies of Playboy buried beneath them? What scale of investment would it take to make Detroit tillable? How many basements would you need to remove? My city-slicker understanding of Midwestern agriculture is that there are lots of dead dinosaurs mixed into the soil in states like Iowa and Illinois, making their soil incredibly rich and productive. What’s in the soil in Detroit?

The urban swamp seems a much more appropriate end result of all this hasty, but necessary demolition. What should we expect to grow out of all this?