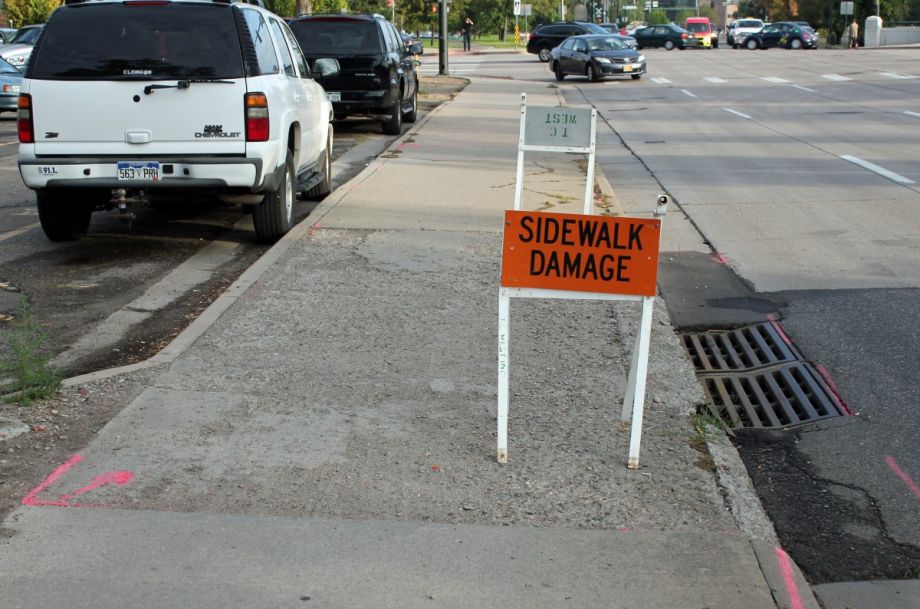 Amid ambitious transit expansion plans, rail has been the star of Denver mobility in recent years, but when it comes to the path from home to brand-new station, pedestrian advocates and city officials are now focusing on a basic, but critical, piece: sidewalks.

Like in many Western cities, sidewalk repair and construction isn’t funded by the city of Denver. Property owners are legally responsible for maintaining their adjacent sidewalks and building them when they don’t exist, which can run from the hundreds to the thousands of dollars. For decades, the city’s enforcement has been lax, leaving an estimated 250 miles of missing sidewalk, and hundreds more miles in dangerous disrepair — many of them in low-income neighborhoods. Now some groups, with the support of several city council members, are campaigning the city to create a funding mechanism for sidewalks and bring them into city jurisdiction.

Under the current policy, people with limited mobility, in wheelchairs or pushing strollers may find themselves suddenly unable to pass because of buckled concrete or a too narrow segment or because the sidewalk just ends. And because the city doesn’t maintain the sidewalks, the public works department keeps a record of where sections are missing — but not where the most damaged stretches are.

“We don’t have a coherent system for evaluating sidewalks,” says Council Member Paul Kashmann. “In other words, the sidewalk can be in horrible condition, and if you don’t walk by and stumble upon it and say hey and call the city and say there’s a problem here, we don’t go out and inspect the sidewalk. So problems can go on for an extended period of time.”

If a complaint is made, the city is supposed to post a notice to the property owner requiring them to fix the problem within 45 days, or the city will do the work and charge the owner. But that system is hardly addressing the scope of the issue. In 2015, just 16 complaint calls were received.

Kashmann, as chair of the council’s Sidewalk Working Group, supports creating a funding mechanism that would allow the city to take over repairs. His group hasn’t yet settled upon a payment method, but they’re looking at several tactics used in other cities. In Westminster, Colorado, for example, a $6 infrastructure fee added to a resident’s monthly utility bill goes toward sidewalks and street lighting. Ithaca, New York, charges residents an annual maintenance fee based on the amount of foot traffic and street frontage of their property. Denver could also allow property owners to opt in to a sidewalk fund that would then be available to them for construction or repairs. Or the city could work through improvement districts to offer homeowners in a particular area discounts when they purchase services in bulk.

Whatever the mechanism, “The main idea is that the homeowner does not get hit with fixing their sidewalk on their own at retail rates,” says Kashmann. Denver also wants to avoid what happened to Los Angeles. The city took over the sidewalks over 40 years ago when funding was flush, but when federal money dried up, L.A. couldn’t keep up maintenance. Now a settlement reached with disability rights groups earlier this year will require the city to spend $1.4 billion on damaged sidewalks over the next 30 years, and the city may shunt sidewalk maintenance back to property owners again.

“The city should have a good proactive program for going out and fixing the sidewalks when they need to, in the same way that they go out and fix the potholes and the roadway rather than leaving it up to individual property owners to take care of it,” says Jill Locantore, policy and program director for WalkDenver, a walkability advocacy group. Last year, while talking to city officials, business improvement districts and transportation planners for a WalkDenver report on first mile/last mile connections to transit, “consistently over and over again, sidewalks came up as the most important piece of infrastructure needed for people to access transit, but also the most inadequate and woefully underfunded,” says Locantore. “So it became really clear that having sidewalks is important not only for walkability, but also for having a complete, functioning transit system.”

In order to get a picture of Denver’s current state of sidewalks, WalkDenver, in partnership with PlaceMatters, also launched an app called WALKscope, which allows anyone to contribute information on sidewalk and intersection conditions anywhere in the city. Recently, they sourced a whole lot more information through a data challenge: People were encouraged to form teams and log as much data as possible. The three top teams got $1,000 for a small neighborhood walkability project, like signage. WALKscope’s data set grew by 60 percent in just two weeks. Prior to the recent surge, 35 percent of the sidewalks mapped were in poor or very poor condition.

All that data is publicly shared online, available for anyone — including the city — to download and utilize. But Locantore says the city has been nervous about using the WALKscope data for liability reasons. And WalkDenver has largely been excluded from the city’s new Denveright planning initiative, which will include a pedestrian master plan. Still, they’re forging ahead with their campaign to have the sidewalks municipally adopted. “Our primary ask is that it is a dedicated funding source,” says Locantore, a pot that would replenish itself and be available every year.

Last year the group collected 3,000 signatures on a petition to have the city take over sidewalks, a petition that specifically mentioned the possibility that residents would need to pay into that fund. Locantore says that at the many community meetings she attended, people seemed to understand the need and were willing to pay up. “People do view it as a fundamental piece of public infrastructure and it’s pretty ridiculous that the city doesn’t already take care for it the same way that they do the pavement and the sewer pipes,” she says.

WalkDenver and Kashmann would like to see the Sidewalk Working Group agree on a policy proposal by the end of the year.