L.A. Weighs Options for Fixing 4,400 Miles of Sidewalks – Next City 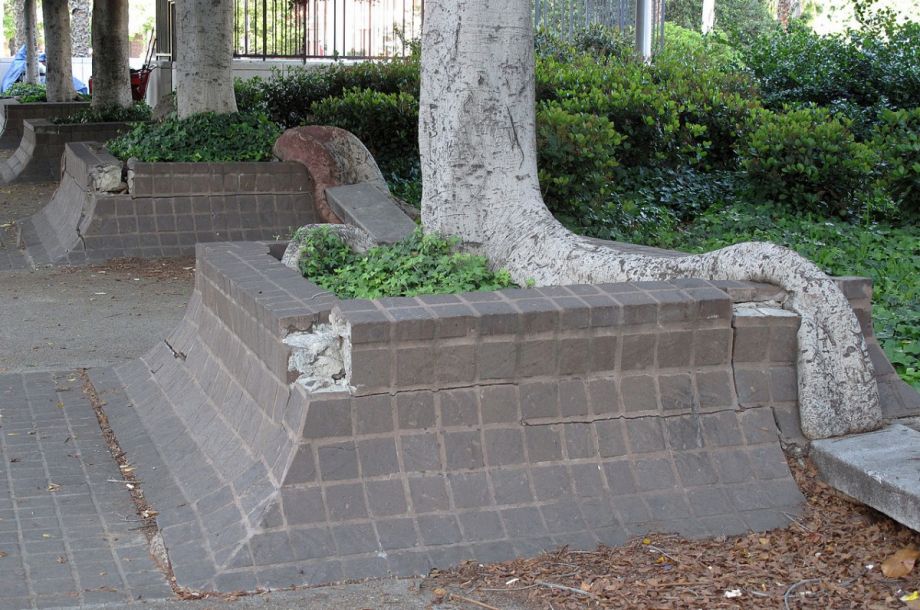 Perhaps no greater cliché hangs over the city of Los Angeles than that of “nobody walks in L.A.” The truth is, progressive planners have been trying to soften the city’s car-centric image for years. Neighborhoods have become more walkable, and the city’s often-ridiculed public transportation system has expanded and improved. Indeed, plenty of people walk in L.A.

Increasingly, though, many of them can’t walk — or at least find it more difficult than ever.

In a city famous for the sudden shock of moving earth, the disrepair of Los Angeles’ sidewalks is a slow-motion disaster, threatening ankles, baby strollers, disabled pedestrians and the city budget alike. Sections of pavement look more like skateboard ramps than they do sidewalks. Concrete has crumbled. Slabs have been uplifted. Some stretches look as if they have suffered their own private earthquakes.

“You just look at these sidewalks around the city and you know … there’s some failure of government that has to be addressed,” says Dennis Gleason, policy director for Los Angeles City Council Member Joe Buscaino and self-described expert on the city’s sidewalks.

The city estimates that some 4,500 of its total 10,750 sidewalk miles are in disrepair. According to a 2007 USC study, the city repaired a grand total of 64 miles of sidewalks, or 1.4 percent of damaged sidewalks, improving the city’s backlog to 72 years.

The reasons for this civic embarrassment go back even longer than 72 years. They are twofold. One is political, the other arboreal.

In 1911, the California State Legislature passed the Improvement Act, a pro-growth statute mandating that property owners maintain sidewalks adjacent to their properties. (Cities around the country commonly place this burden on property owners, but in many places, sidewalks seldom need repair.)

“Los Angeles was a pretty young city,” says Gleason. “Generally a concrete sidewalk will last for 50 to 80 years as long as there’s nothing that will cause it to crack or get uplifted.”

From the early 1900s onward, real estate developers lured residents to southern California through many means, not the least of which was the obfuscation of the city’s semiarid climate. The region’s primary native tree species, the California live oak, grows neither quickly enough or tall enough to create an appealing urban forest. So developers turned to fast-growing non-native species. Unfortunately, one of the most popular species — especially in the 1950s and 1960s — was the Indian fig, or ficus, tree.

If you give a ficus 30 to 40 years, it will sprout to a majestic height, comfortably above the roofline of the average ranch-style house. Meanwhile, as Senior Arborist Linda Eremita of TreePeople, a nonprofit that advocates for a healthy urban forest in Los Angeles, explains, the ficus has a “buttress root system,” meaning that its roots flare out at the base above ground. They wreak havoc on whatever lies in their way.

“Now we are experiencing the non-planning of [decades] ago,” says Eremita.

Gleason calls the ficus “the big culprit” — and the reason why anyone today has to care about the Improvement Act.

In 1973, the city passed an ordinance essentially nullifying the Improvement Act and placing responsibility for sidewalk repair on the city, provided that damage was caused by trees. The ordinance survived an initial veto by then-Mayor Tom Bradley, but the city passed it because the federal government promised to fund some of the repairs. Gleason says that decision was shortsighted at best.

Federal funding ran out just as the city’s forest of ficuses came to maturity. For decades since then, the city has spent almost no money on sidewalk repair, essentially ignoring the problem to the point that the city now estimates that the citywide repair bill will cost upwards of $1.5 billion. Who ought to pay for it — and who will actually pay for it — is a matter of lively discussion at City Hall.

“It’s forcing the city to act and finally resolve this longstanding question of law of who is ultimately financially responsible for sidewalks,” says Gleason. “Is it the property owner, like the state law says, or is it the city when the cause of the damage is a city street tree?”

That question has to be answered soon. The city has faced a series of lawsuits filed under the Americans With Disabilities Act claiming, understandably, that the buckled sidewalks impede the movement of disabled people. The city is on the verge of reaching settlement in the major remaining case, one provision of which will be to implement a repair program to bring sidewalks into ADA compliance.

At the same time, the sidewalks are impeding the city’s other policy goals surrounding smart growth and promotion of transit.

“We preach that we want this whole first-mile, last-mile connection to our transportation system, and we’ve got to make that happen,” says Deborah Murphy, executive director of Los Angeles Walks, a pedestrian advocacy group.

In downtown’s South Park neighborhood, as many as 20 high-rises, mostly apartment buildings, are slated for development, making it the heart of the city’s move toward density. Cracked sidewalks are poor complements to gleaming new towers.

“A good portion of the sidewalks are going to be redone as part of development projects, but there are going to be huge gaps,” says Jessica Lall, executive director of the South Park Business Improvement District. “You can’t create a sustainable neighborhood if block to block, things aren’t cohesive and walkable.”

The city is considering a dazzling array of funding schemes.

• The council has proposed that property buyers be assessed for sidewalk repair at the point of sale, or that landlords be required to fix sidewalks when they do other major improvements.

• Some proposals would force property owners to pay for repairs but would split the costs, 50-50, with the city.

• Councilman Buscaino recently advanced the concept of “beautification assessment districts,” in which property owners would agree to tax themselves in exchange for the repair of sidewalks throughout the district.

Gleason predicts that, with the lawsuit expected to settle in a few weeks, the City Council will propose a repair and funding plan by summer.

“If people cannot get around easily from block to block … it hurts our businesses,” says Lall. She explained that BID members may be predisposed to contribute because they “understand and have accepted that they’re not going to get all the services that they should be receiving from the city.”

As for the ficus? Its reign of terror is over. The city has published an approved list of street trees, including species that are appropriate for the climate and that might enable the city’s second generation of sidewalks to last longer than the first did.