New Map Shows Which Cities Are Changing Rules About Parking 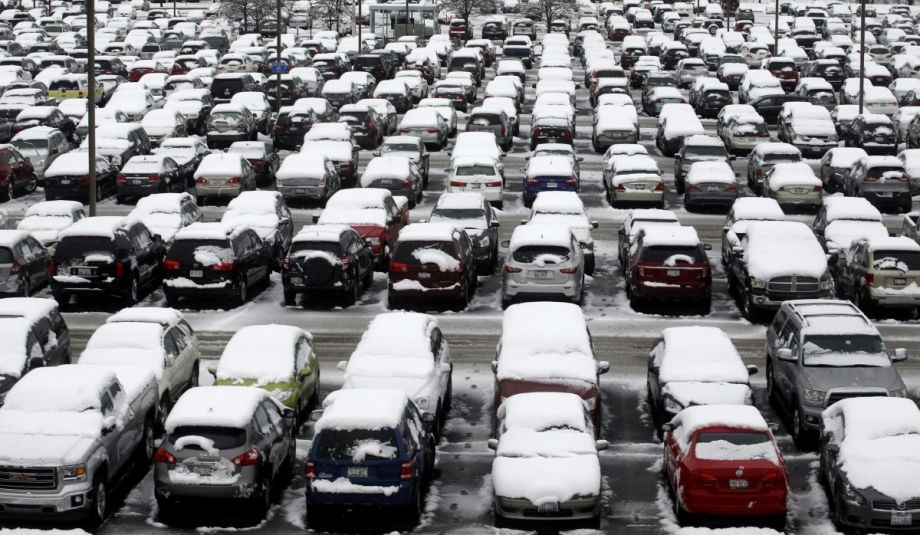 Developers in Chicago no longer have to meet parking minimums if they offer alternative transportation options, such as bike parking. (AP Photo/Nam Y. Huh)

Parking minimums don’t encourage affordable smart growth — and that isn’t news. Some codes haven’t been updated in decades. Car storage raises the cost of housing in a kind of rent-spiking feedback loop. Excess space may encourage driving, even where other options exist. You’ve heard it all before.

But in the spirit of show-don’t-tell, a new crowdsourced map demonstrates nationwide pushback against minimums with pins resembling tiny hot air balloons. The graphic’s scale makes it more arresting than any lone statistic and, as such, it might just provide a nudge to the other gatekeepers of excess asphalt: lenders.

The visual database comes from nonprofit advocacy group Strong Towns. Its pins fall into three color-coded categories: green, meaning parking minimums have been eliminated in at least one part of the city; blue, meaning minimums have been lowered; and orange, meaning leaders are “currently discussing their parking minimum laws.” Click on a pin and a sidebar opens to identify the city and explain in detail the state of its vehicular resting code.

Not surprisingly, pins cluster more densely east of the Mississippi River. They’re scarce save for large metros on the West Coast — San Diego, Los Angeles, the Bay Area, Seattle — and nearly absent from the Southwest (hello Fruita, Colorado). The Midwest holds quite a few greens, though, from Fargo, North Dakota, down to Houston.

As with any crowdsourced data, the map has holes. Info has been trickling in for about two months according to Strong Towns Communications Specialist Rachel Quednau, with a total of 83 people providing information. They’ve either responded to a survey broadcast in the organization’s newsletter and website or seen the map online and come forward to report their own city, so the data probably reflects the organization’s readership as well as actual changes to code. And the categories aren’t perfect — the orange pins represent a range as wide as the term “discussion,” showing a study yet-to-be-completed and a sunsetting minimum that just can’t seem to sunset.

But in Quednau’s words, it is a good start. And it’s continually evolving.

“We wanted people to see how geographically diverse [parking removal minimums] are,” she adds. “I think the visual impact is powerful.”

It is, but is it enough to transcend city law? Minimum parking requirements aren’t the only force driving excess parking. The lenders who finance development can also be quite conservative in their vision of what constitutes “enough” parking.

“Lenders’ main concern is always whether they can get their money back,” says Michael Manville, an assistant professor of city and regional planning at Cornell University.

In some of the denser markets — downtown San Francisco, Manhattan — they can be more easily persuaded to build with less parking, he says, adding, “you do see some initial concern if [developers] want to start building without parking in places that have traditionally had parking.”

“While it is true that lenders, investors and chain retailers may have their own parking standards, the problem is that they often point to the local minimum requirements as the guidance,” he said via an email. “Local deregulation means that the other parties have to decide for themselves about the level of market risk associated with different parking supplies.”

Manville adds that there’s no one lender. Biggies like JPMorgan Chase, smaller regional banks and even private institutions finance development, so it’s difficult to make sweeping statements. And in the last few years, several big developers have built condos with very little parking and continued to make a profit, so reference points are beginning to exist. But in general, finance is fairly risk-averse, and can help keep long-held parking norms in place.

I ask Manville if a database like the one Strong Towns put together could make a difference — not just to reluctant mayors but to bottom-line-driven institutions. He says yes, but indirectly.

“It’s going to be more useful for local governments to see that other towns removed their minimums and the sky hasn’t fallen,” he says. “But as more and more places remove their minimums it helps lenders indirectly by making it more obvious that developers with less parking than might otherwise be thought optimal can still generate a good return.”