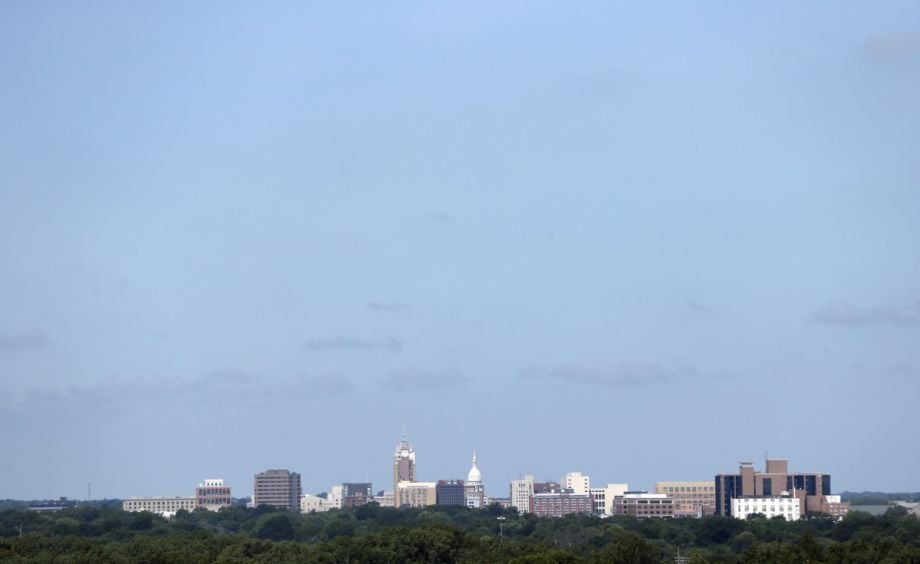 Donald Trump issued a clarion call about jobs at the first presidential debate with his opponent, Democrat Hillary Clinton, last Monday. U.S. manufacturing, the Republican nominee said, was dying largely because of former President Bill Clinton’s signoff on the North American Free Trade Agreement (NAFTA), and Trump, if elected as America’s next chief executive, would bring jobs lost as a result back to cities in states like Ohio and Pennsylvania.

International trade deals like NAFTA and cheap operating costs in less wealthy countries have indeed enticed American companies to move abroad, but it’s important to take a step back and remember that not all of them were forced to make that decision with a gun to their head. Flirting with the idea of going offshore is sometimes a negotiating tool mega-rich enterprises use to get U.S. cities and states to offer billions of dollars in tax incentive packages — even when there’s no guarantee they’d leave if tax credits weren’t thrown their way.

Take the case of General Motors and Lansing, Michigan. When GM announced 25 years ago that it would begin closing auto plants in at least 20 cities across the Rust Belt and on the East Coast, its Lansing facility was one on the chopping block.

That would have meant losing 7,000 manufacturing jobs in the state capital, and potentially threatening up to 70,000 supplier jobs throughout Michigan that depended on GM’s operation there, according to researchers at the University of Michigan. (In total, the GM closures meant a net loss of 70,000 jobs, or at least 18 percent of the company’s workforce in North America.) So the city decided to act.

In 1997, with support from a variety of local stakeholders — autoworker unions, neighborhood organizations, professors, government officials and even local pastors — then-Mayor David Hollister started putting together a regional committee that fought tooth and nail to show GM that the people of Lansing were willing to do whatever it took to get them to stay local.

Hollister also backed a state offering of tax credits worth $98.9 million aimed at luring the auto manufacturer into maintaining a new Lansing plant — partially built with $7 million of the city’s money — once the old one shut down. Their campaign worked and helped keep jobs in the city, but the offer dovetailed with the start of nearly one and a half decades of giving out major tax credits to big automobile manufacturers and other major employers in the region.

“It led to the diversification of the economy,” says Hollister, reflecting on the way his city and state tackled the issue. The play-by-play of that approach is documented in his new book, Second Shift: The Inside Story of the Keep GM Movement, which looks at how Michigan grasped for the auto producer to keep their operations in state in the late 1990s.

Camaraderie wasn’t his only weapon. In 1997, Hollister worked with United Auto Workers and the city’s chamber of commerce to replace Lansing city council members who voted no on GM tax credits the year before. He also worked with then-Governor John Engler’s administration to widen the state’s Michigan Economic Growth Authority (MEGA) legislation on corporate tax credits. MEGA was created in 1995 but amended at least five times between then and 2005 to lower the job creation numbers that businesses had to meet to qualify for the break.

Tax handouts have been status quo in cities like Detroit and Flint since car makers started threatening to take their operations offshore during the same decade GM told Lansing it was planning to leave. In Michigan, the MEGA program, which was halted in 2011, left the state with a $9.4 billion tax liability. Sixty percent of the credits were eaten up by GM, Ford and Chrysler. The state has worked with car companies to renegotiate the terms of these deals, and as of May 2016, according to Crain’s Detroit Business, officials thought “refunds will peak this year with an estimated $600 million in MEGA credits claimed.”

But was it all worth it? Looking back, Michael LaFaive, director of the Morey Fiscal Policy Initiative at the Mackinac Center for Public Policy in Michigan, says that even though Hollister and the Keep GM movement were only responsible for a fraction of Michigan’s tax woes, there’s still little conclusive evidence that these abatements were the line item that made GM drop anchor.

“The positive result was very, very small, to the point that saying it was a key ingredient in securing GM as a major employer in Lansing is probably inaccurate,” he says. “It did have some influence, but it just cost everyone else around the state to cross-subsidize a company that may have stayed there anyway.”

He backs this statement with two observations — both of which are touched on in the book.

The first is that GM had a strong relationship with UAW Local 652, the union working directly with GM in Lansing. GM knew that workers at its Lansing plant were way less likely to go on strike than those at other GM operations throughout the country, according to LaFaive. Indeed, the authors of Second Shift go as far as noting that “the relations between the local Lansing-based UAW and GM were known to be among the best in the country.” 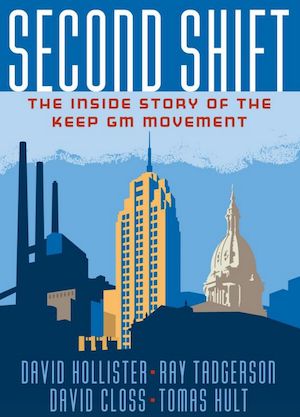 Second is that after announcing it would close its Lansing plant in the 1990s, GM told the Lansing government that it was already considering building a new manufacturing plant in the central Michigan area. In the book, Hollister and his co-authors write that it was unlikely that Lansing would have been the first choice for that new plant, but the breadth of GM’s demands — new wage contracts with UAW workers, lower property taxes — didn’t necessarily put a tax-credit-free deal out of the realm of possibility.

“These programs are demonstratively ineffective, unfair and were probably unnecessary as well, given the other important variables that GM factored into its calculus,” says LaFaive.

In a report from 2005, LaFaive and his colleague Michael Hicks combed through datasets from the Michigan Economic Development Corporation and other state documents. They found that the $1.8 billion worth of MEGA tax credits given out to 127 businesses in the prior decade only generated enough jobs to make up about 0.3 percent of the state’s workforce.

He’s reluctant to buy in to the city’s job claims from that era. That same report concludes that those credits helped created 13,541 direct jobs — less than half the city’s original promise of more than 35,000 direct jobs.

Decades later, Hollister argues tax abatements were the only way to keep the operator there. “Any state, and any community, can and will deliver tax incentives,” to keep major employers, he says. “And they’ll make them as lucrative as they can, given their financial circumstances and politics at the time.” Engler claimed that for every $1 in tax credits invested in GM, there was an estimated $21 in additional tax revenue the city would receive through payroll taxes and property taxes.

Hollister also points to the economic development programs that the Keep GM deal helped jumpstart, claiming their influence on job creation in Lansing is ongoing. Part of the deal was that GM would collaborate with the UAW, Michigan State University, Lansing Community College and the city to helm science, technology, engineering and mathematics tutoring sessions at local elementary and high schools. The program, called CLASS, counts over 1,000 volunteers in the early 2000s, ranging from engineers to city officials, who visited students from disadvantaged backgrounds to help them navigate tough school subjects.

UAW and GM also created the Lansing Area Manufacturing Program, and the Lansing Community College West Campus, built in 2004, that hosts the Michigan Technical Education Center (M-TEC) workforce development program. The campus partners directly with GM and other major manufacturers like Lincoln Welding, Haas and Siemens Building Technologies, and has issued 489 degrees and certificates. (The center doesn’t track whether or not recipients actually land jobs, however.)

Hollister’s book highlights the power government can wield when it funnels its time, energy and resources into partnerships with local stakeholders toward a single goal. But when it comes to the decision to give GM those tax credits, it doesn’t present a totally watertight case — and that’s not entirely Lansing’s fault.

Major employers know they can manipulate cities and entire regional economies, and it goes far beyond Lansing. In Jeanie Wylie’s Poletown: Community Betrayed, about a Detroit neighborhood that got paved over for a Cadillac plant in the 1980s, then-CEO of Chrysler Corporation Lee Iacocca put a spotlight on the kind of power auto manufacturers can have over governments.

“We would pit Ohio versus Michigan,” he said. “We would pit Canada versus the U.S. We’d get outright grants and subsidies in Spain, in Mexico, in Brazil — all kinds of grants.”

That’s why LaFaive wants legislators to recognize that they may have more bargaining power than they think when these types of negotiations hit the table.

The case of Owens Corning and Novi, Michigan, is one good example. In September 2001, the building and remodeling company approached the state for a MEGA credit for a new headquarters in Novi. The state was enthusiastic, but Novi’s city council rejected the idea of giving out any kind of tax incentives to the company, which netted $4.76 billion in sales that year. Owens Corning built their facility there anyway — and that was before the MEGA tax credit program had come back to haunt Michigan taxpayers and drum up a barrage of negative PR.

NAFTA and competitive labor costs in countries like Mexico have had an undeniable sway on the leagues of American companies going offshore. But in the spirit of last Monday’s political debate over what’s good for the U.S. economy, making cities choose between potentially losing tens of thousands of jobs or leaving taxpayers on the hook for billions of dollars’ worth of credits is the approach of a company that’s more interested in profits than the American workers who help generate them.