Searching for the American Dream in Harlem – Next City

Searching for the American Dream in Harlem 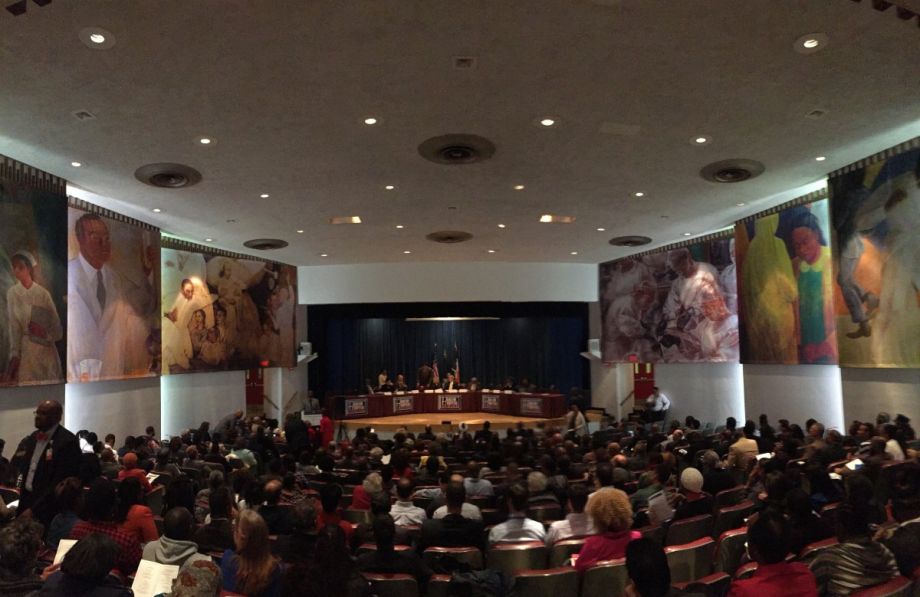 The Mural Pavilion, in Harlem, on Friday (Photo by Oscar Perry Abello)

“I am living my American Dream,” said Natasha Green, founder and CEO of education consultancy WeIntervene and also CEO of Hidden Gems Archery. “I’m running businesses, having an impact on my community and my local economy. My question to you is, what was the American dream cited by the people you talked to in all these studies and other places? How did these other voices define what was the American Dream?”

Stumped, the congressional delegation and expert panel looked at each other in silence for a few moments. Not that they didn’t clearly appreciate the question.

“When I was a high school dropout hanging around Lenox Avenue [a main Harlem thoroughfare], getting off of Lenox was my version of the American Dream,” Rangel said eventually in response to Green. “I didn’t know what other opportunities were out there. If you don’t have access to what can be done, you can’t dream. The dream is unique to what each individual wants to do.”

Helping to broaden the definition of that dream was at the heart of testimony from Clayton Banks, founder of Silicon Harlem, a social venture that aims to transform Harlem into a technology and innovation hub.

“We find the tech sector is a way to address the unemployment and labor participation crisis,” Banks said. “We know for instance that one tech job will create five additional jobs.”

Banks brought up access to capital for tech startups in Harlem as one of the many different barriers that Silicon Harlem is finding ways to break down. “You’ve got Harlem and Wall Street on the same island,” Banks said, quoting Jesse Jackson.

The gathering was the second such forum so far related to an ongoing Joint Economic Committee conversation presented as The American Dream on Hold. The first forum took place in June in Baltimore. Future sessions will depend on other members of Congress stepping up with requests and resources to support them.

The Joint Economic Committee started out with a report that gathered data on the economic challenges facing the African-American community.

“Having good data is critical to getting the pieces in shape to bring change,” Maloney said in her opening statement on Friday.

The immense wealth disparity between white and black families was something that Maloney noted as something that strikes her most deeply. Citing U.S. Census Bureau data from 2013, the Joint Economic Committee report notes that the median net worth of white households is 13 times that of black households.

“It’s impossible to see these numbers and not understand the scope of these challenges,” Maloney said.

Duke University Professor William “Sandy” Darity Jr. was one of the experts who delivered testimony to the delegation. Duke University is in Butterfield’s congressional district.

“While the persistence of employment discrimination constitutes a critical barrier to black economic well-being, the most important barrier is associated with a racial wealth gap,” Darity’s official testimony reads.

“Wealth enables families to purchase high-quality schooling through private school or by purchasing a home in an area with good schools. It facilitates influential participation in the American political process,” Darity said on Friday. “Wealth provides the freedom to innovate, start a new business, make new investments.”

The meat of Darity’s testimony to the congressional delegation centered on data uncovered at Duke University’s Samuel DuBois Cook Center on Social Equity, where Darity is director.

Darity rounded out his testimony with a call for three policy changes. First, a program of reparations that would provide compensation not only for slavery but for 100 years of Jim Crow practices and ongoing racism and discrimination. Second, a program that would guarantee employment for all Americans on par with the Works Progress Administration during the Great Depression. And third, a program that would provide each newborn infant a government trust fund or endowment with an amount depending on the wealth position of their family, which they could access upon reaching adulthood.

To make sure those policy changes have a chance, the crowd and the testifying experts seemed to agree, a return to political fervor is essential.

“People don’t respect us because we don’t respect ourselves. When we don’t vote, that’s disrespecting ourselves,” said Hazel N. Dukes, president of the NAACP New York State Conference in her testimony Friday. “We need to vote. If we don’t do that, we won’t begin to eradicate poverty in our community.”