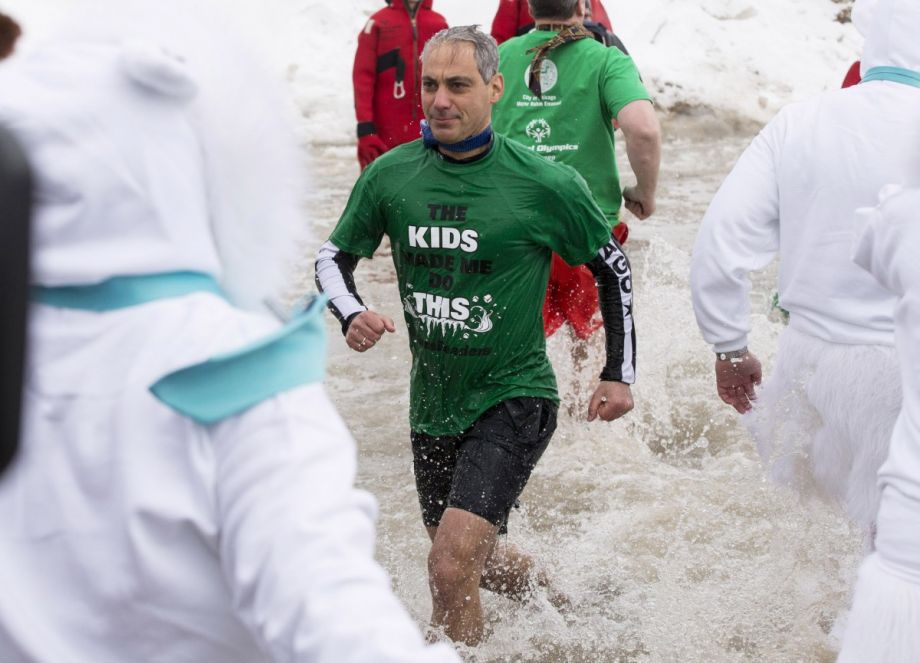 As he faces a mayoral race in 2015, does Rahm Emanuel (shown here at Chicago’s “Polar Plunge”) have climate change on his mind? (AP Photo/Andrew A. Nelles, File)

Climate change action is changing. Where some states once attempted to “outlaw” sea level rise, state and local governments nationwide are now responding to the need for pragmatic measures. Fourteen states have created climate change action plans, with most incorporating myriad measures on transportation, agriculture and energy into a framework specific to the state’s economy and geography.

Cities, too, are focusing on the issue — from New York Mayor Bill de Blasio’s recently announced goal to reduce greenhouse gas emissions and this bold Boston vision for adapting to a watery future, to Minneapolis’ plans to build the most resilient neighborhood in the country.

Though many cities that are stepping up are coastal, the Midwest isn’t immune to climate catastrophe. So why is Chicago ignoring this issue? And will the 2015 mayoral race force Mayor Rahm Emanuel or another candidate to pay attention?

Former governor Rod Blagojevich created an Illinois Climate Change Advisory Group at the Illinois Environmental Protection Agency in 2005, and the group released a series of recommendations for action in 2007. The document lists changes aimed at reducing statewide carbon emissions to their 1990 levels by the year 2020; five of the recommendations drew majority consensus (PDF) from the group. (Most of these involved cap-and-trade regulations and tighter emissions standards on new industrial developments.)

But seven years after its completion, even the report’s most modest recommendations haven’t been implemented. An advisory group member from Ameren Corporation, a St. Louis-area energy provider, says that the recommendations got lost when new governor Pat Quinn took power in 2008: “To be honest, it’s just kind of gone out there and not really a whole lot of action has been taken on it. That was the exchange of power between administrations. … There was no real impetus after [Blagojevich left office] to keep the ball rolling.”

Despite the lack of action, Quinn, whose re-election battle is in a dead heat, calls himself “the most environmentally friendly governor in Illinois history” on his campaign website. The website notes his $1 billion Clean Water Initiative, and this does far outstrip the efforts of his conservative opponent, Bruce Rauner. (Rauner’s website never mentions the environment; his media team did not respond to a request for comment.) But the Illinois Climate Change Advisory Group was disbanded in 2010, and Illinois has no climate change action plan.

Quinn isn’t the only politician in Illinois trying to back-burner the rising heat. Former Chicago mayor Richard M. Daley initiated a city-level climate change action plan before leaving office in 2012. To date, his successor, Mayor Rahm Emmanuel, has done little for the environment. Although he announced a plan called Sustainable Chicago 2015 in 2012, the mayor’s office has made very few comments on environment since early 2013. The city’s climate action plan has been augmented with little more than a headline claiming that “Chicagoland’s Corporate Leaders Drive Sustainability.” It’s a familiar but often poorly regarded trope from the mayor many call “Mayor 1%.”

Notably, the inaction of state and city officials thus far defies even the wishes of some bigger industries. In 2007, Caterpillar, the most noteworthy industry in the state, submitted a letter to the final Climate Change Advisory Group expressing its support for some of the group’s recommendations: “There are some that we believe have merit.” Ameren and other corporations also favored some regulations.

In Chicago’s 2015 mayoral race, Emanuel is up for re-election. Until late Monday night he had virtually no viable opponents. Now County Commissioner Jesus “Chuy” Garcia says he’ll run. Garcia’s campaign remains tenuous — he has not yet completed final steps to enter the race, and has little cash on hand. While many Chicagoans are eager to vote for anyone but Emanuel, Garcia has not articulated his platform just yet. Whether he’ll address climate change remains to be seen.