What Keeps U.S. Mayors Awake at Night? – Next City 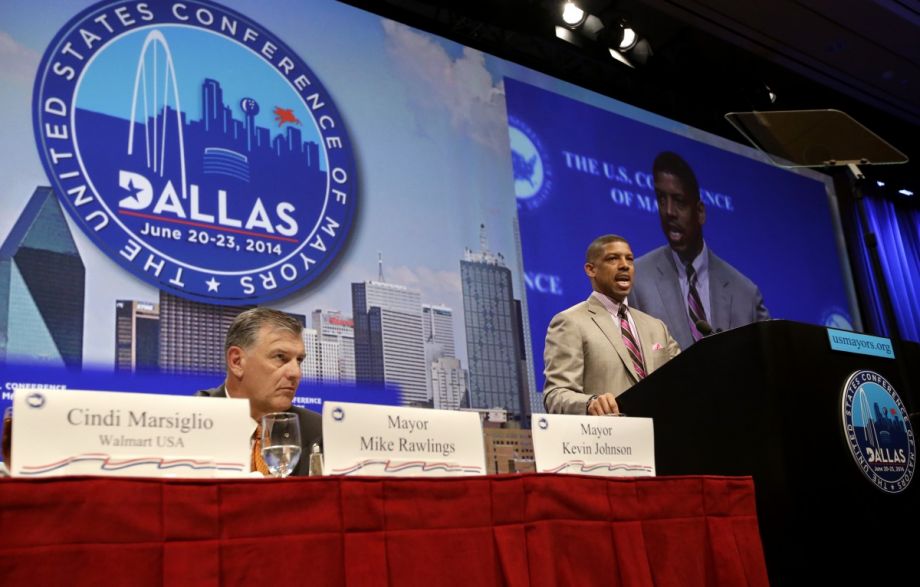 While we often get snapshots into how certain U.S. mayors feel about specific issues (like transportation or stadium subsidies or “poor doors”), we rarely get an integrated overview of the way our cities’ executive branches, on the whole, prioritize policies based on their political environs.

To get that big-picture angle, former Boston mayor Tom Menino spearheaded a just-released study with the Initiative on Cities at Boston University. The report offers insight into how more than 70 mayors feel about their challenges, policy agendas and relationships. The survey was timed to the U.S. Conference of Mayors held in Dallas in June, and the mayors’ answers were then sliced by party, economy and population — to reveal how these factors play a role into shaping public policy.

“I was mayor of Boston for 20 years. I never saw a survey such as this, asking mayors direct questions about what they thought on some of their issues,” Menino says. “I talk to mayors every day about some of the problems they may have, pertaining to education or other issues in their cities. We [at the Initiative on Cities] are just trying to be helpful, providing the first nationally representative survey of American mayors on policies, priorities and challenges.”

Overall, the survey reveals that despite numerous recent headlines about mayors rising above partisan gridlock to “get things done,” politics matters.

Parse the mayors’ answers by size or wealth of the cities, and answers often align. However, slice by political party and more distinct variations come to light. When asked about their top two challenges, the mayors overall cited aging infrastructure and fiscal (budgetary) matters the most.

“[Infrastructure is] a quality of life issue, how your neighborhood looks,” Menino notes. “It’s having people come to a neighborhood and see a sidewalk that’s fixed, a street that’s in good condition, lighting that’s proper and trees that are trimmed.” 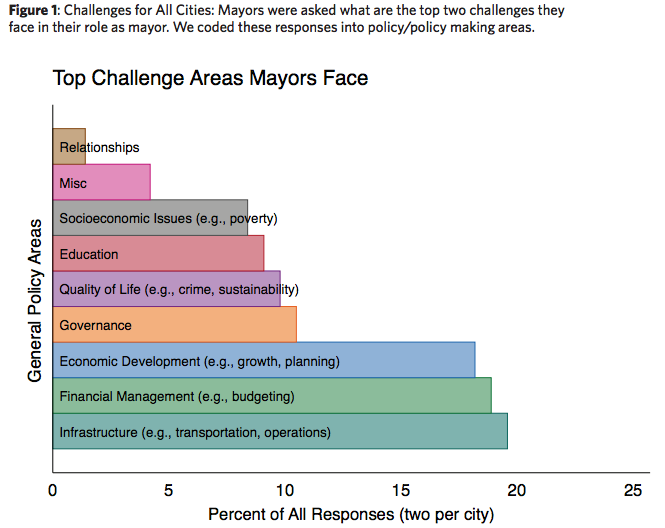 Breaking down the same answers by political affiliation exposes a divide on priorities (see figures below), with Republican mayors emphasizing “economic development” challenges, and financial management at the head of the list for Democratic mayors.

Education and socioeconomic issues appeared to be more divisive, perhaps unsurprisingly. When Democrats were asked about where they expected to spend their political capital, those two topped the list. Republican mayors ranked education the lowest.

The surveyors also asked the mayors whether the government should try to close the gap between rich and poor, even if it came at the expense of businesses and/or the affluent. Republican mayors overwhelmingly were opposed (almost 90 percent), while more than half of the Democrats agreed with the tradeoff approach. The researchers point out that even that number was more conservative compared to the stance of the national Democratic leadership. This might have to do with the different challenges, particularly fiscal, that Democratic mayors are facing. 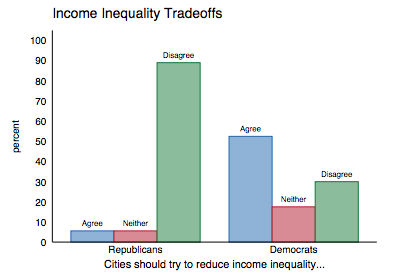 Even though affordable housing is an increasing concern from New York to San Francisco, many mayors seemed reluctant or ambivalent to address the issue of whether rising property values was good, if they ended up displacing the city’s poor. The clearest dividing line between mayors was along the economic health line. Mayors from poorer cities were more likely to “support gentrification” than leaders of wealthier cities. 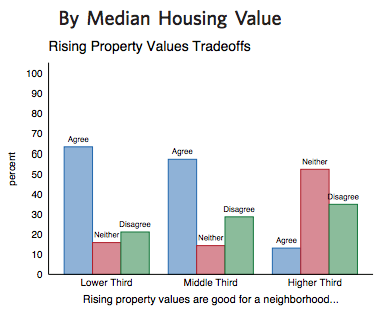 Menino sees this as representative of how the study shows mayors responding to their constituents more than affiliations and relationships, saying, “Most mayors are concerned about how they deliver basic city services to their constituents. When they take office, they have to reflect the needs of the community. Mayors who don’t, don’t last too long in the business.”