Which Cities Should Be Most Worried About Pension Funds? – Next City

Which Cities Should Be Most Worried About Pension Funds? 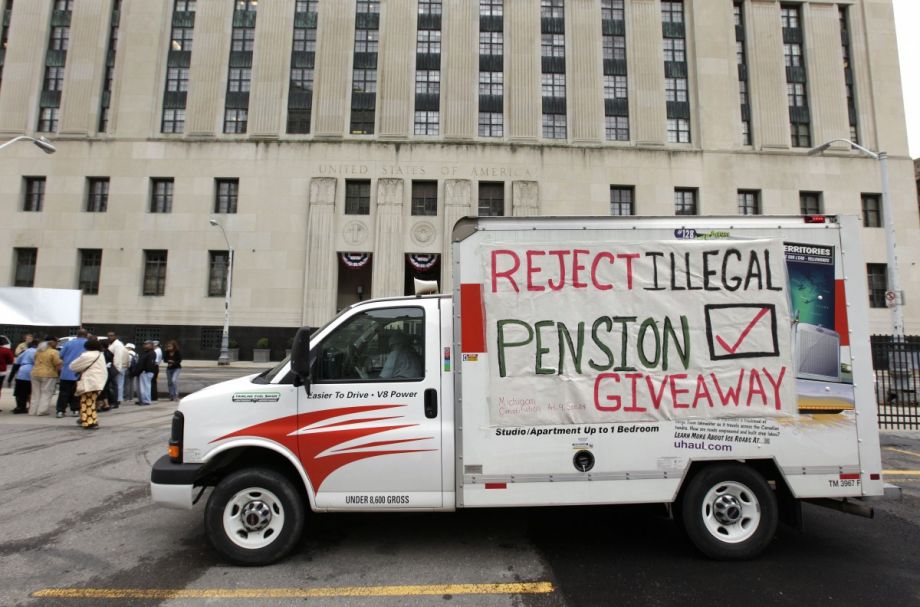 America’s pension debt problem is at a critical juncture; the Census of Governments reports that pensions now exceed outstanding debt as the largest type of state and local government liability. Next City’s Forefront this week dives into how American cities and states are confronting the snowballing problems of keeping their pension plans funded for the next generations of retirees.

Cities like Chicago — which has an unfunded pension liability of $19.4 billion according to a report by Morningstar Municipal Research — are facing the repercussions of kicking the can down the road by not sticking to payment schedules and maneuvering the actuarial science behind forecasting pension liabilities. One of the legacies of the recession — low interest rates that have leveled off — has forced cities to redo their math, darkening projections and lowering expected funding ratios. City residents will assume some of the burden of this funding in the form of taxes. Additionally, they will have to fund their share of the pension liabilities in other overlapping jurisdictions including county, state and school district.

I spoke to three experts — Josh McGee, vice president of public accountability at the Laura and John Arnold Foundation; Kim Rueben, senior fellow of the Tax Policy Center at the Urban Institute; and Amanda Kass, budget director and pensions specialist at the Center for Tax and Budget Accountability — and asked for their opinions about which cities are facing the biggest uphill battles in keeping their pension systems funded, so that public service workers will be supported by their promised pension income in the years to come.

Amanda Kass: “The thing about pensions is that there’s nothing inherently wrong with pension systems. I think if you look across the board at pension systems of why they are underfunded, some of it has been … the Great Recession, but by and large, it’s a historic lack of properly funding them. Part of that is having some discipline. Pension systems are easy to underfund. You need to put in money today so that 20 years from now that money plus an investment return is sufficient to pay benefits.”

Josh McGee: “People, especially at the city level, treat [pensions] as if it’s soft debt. But it’s as hard as any other debt that the city will take on. In fact, I would argue that it’s a harder debt, because you’re not going to leave public workers flapping in the wind for moral and legal reasons.”

Kim Rueben: “The first thing you need to do is stop digging. The recession hurt, but I think more of this — especially in places like Chicago — has to do with actions or inactions. It doesn’t have as much to do with the dollar amounts as much as dysfunction.”

McGee: “We’ve seen a lot of places slash benefits without addressing not paying for what you promise … Pension reform shouldn’t be about benefit cuts. That shouldn’t be the aim.”

McGee: “Chicago continues to delay responsible payments. At some point they are going to have to put more money in their pension funds. They were scheduled in the next couple of years to come up with more than a billion dollars in additional payments to its pension plans on an annual basis. To give you a sense of how large an increase that is, Chicago’s proposed 2014 local funds budget was only about seven billion dollars.”

Kass: “In the City of Chicago, there are four pension systems. There’s one for police, one for fire, one for labor and one for municipal employees. All of them are abysmally underfunded. What’s unique about this city’s pension systems is that until very recently the way that the city determined the amount of money they should put into their pension systems has not been based on any actuarial science or math at all. It wasn’t based on cost of benefits being earned or unfunded liabilities; it was tied to contributions of current employees. In 2010, Illinois legislation was passed that changed the funding plans for police and fire pensions throughout the state. Starting in 2015, local governments had to put in enough money that by the end of fiscal year 2040, the police and fire pension funds are each 90 percent funded. It’s a change from a funding plan that’s underfunded to one that is somewhat funded, which for Chicago, is a huge jump.”

McGee: “In 2010 [Illinois] enacted what’s called a ‘Tier 2’ legislation [that cut employee benefits across the state], but Chicago left in place the terrible funding practices that got them into the mess that they’re in today. There was no change in funding policies, but there were significant cuts in their benefits for new employees. They did recent reforms to their municipal employee and laborers’ pension funds — their smallest funds — and there is some doubt now whether that will hold up in the Illinois Supreme Court, because it included approved modifications for current employees. Illinois has pretty strong protections for employees and the Supreme Court has very broadly defined those protections, so those are going to be challenged. They are saying the right things. They’re saying, ‘This is a big deal. We should be making responsible payments. This should be a shared responsibility between interested parties, including workers, the city and taxpayers.’ But when they went to do reform, there wasn’t a full-throated, strong commitment to responsible funding.”

McGee: “Philadelphia, interestingly, has pension plans, of course, but their school district is also going to additionally struggle, and this is a dynamic that’s going to play out in a lot of cities. Their school employees participate in a state-level system. There’s a convoluted decision-making process for what benefit levels are and what the employment contributions are in local school districts. But the Philly school district has been dealing with very large budget deficits for quite some time, and their pension payments are increasing pretty rapidly. They have relied on state payments to make their pension payments, but there’s no guarantee that it will continue. Future pension payments are going to be a real stress factor there.”

Rueben: “I would put a lot of the cities in Michigan on the list, and that has a lot to do with the way that the pension systems are set up. The fact that Michigan pension systems are set up locally means that the state would have to be much more explicit in taking over some of the responsibility. Detroit is the largest example of that, but there are also cities like Flint that are also in trouble that are being taken over. Part of this has to do with whether local pensions are aggregated up to a state system, like in California or New York, or whether pension programs are being left at the city or local government level, which is the case in Michigan and Pennsylvania …

Part of why I think some of the Midwestern places are in worse shape is because you end up having populations that are moving out and more older people living there. You end up paying for pensions of a declining population. These are essentially payments on services that have already been received, but you have less people paying the taxes to fund them.”

McGee: “New York City doesn’t have a large unfunded liability. They’ve done a pretty good job of making payments, but you have to pay attention to the cost increase. New York City has seen its annual payments increase from around $200 million around the turn of the millennium to nearly $8 billion today, which is a pretty substantial increase in payments, and that’s hard to absorb even in a city with New York City’s resources. The reason that the increase was so substantial was because the size of their retirement promises relative to their local GDP was pretty large. There’s a lot of cost uncertainty. But because New York has made payments over time, there’s not as large a debt piece as other places.”

Rueben: “I’m less worried about New York. I feel like it still has some good rules in place about its fiscal system. Partly I feel like New York looks worse than it might actually be, because they are actually more honest about their accounting. And I also feel like their population is growing.”