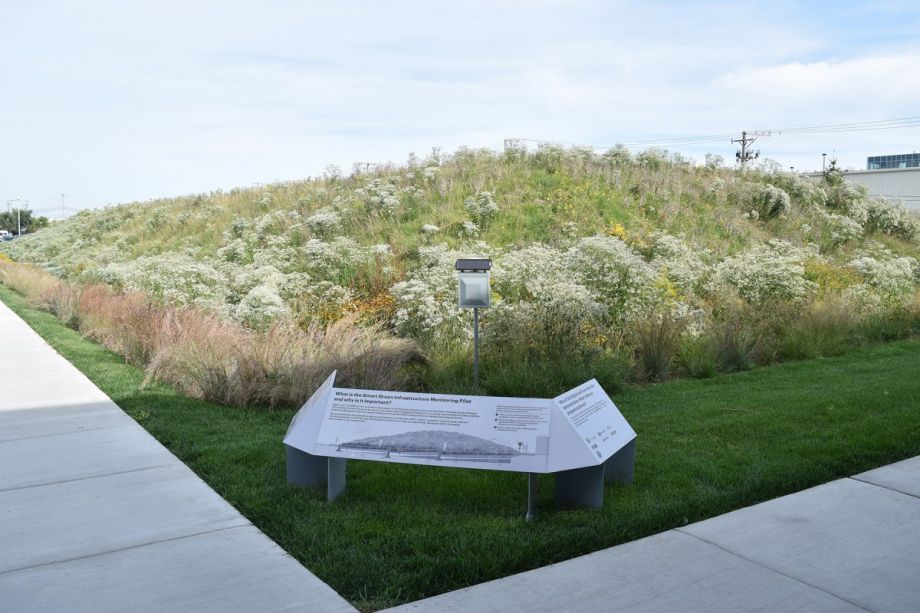 A bioswale being monitored as part of a City Digital pilot program (Credit: UI Labs)

Bioswales, rain gardens, permeable pavers. There’s a panoply of green stormwater infrastructure solutions — but not a lot of data about which types work best in which situations.

A new pilot project by City Digital, a consortium of public, private and higher education entities in Chicago, aims to test the effectiveness of different green stormwater projects using sensors and cloud computing. Two locations — a bioswale and a street with permeable pavements and native plants — are already being monitored by sensors that record precipitation, air pressure, soil moisture, humidity, chemical absorption and more.

“There have been things like rain gardens and permeable pavers for a long time and you sort of know intuitively that these things divert stormwater from the sewer system, but you don’t know what works in which situations,” says Adam Hecktman, Chicago director of technology and civic engagement for Microsoft, a City Digital partner providing cloud computing and analytics for this pilot.

Once installations are done in spring 2017, the pilot will include six sites transmitting over 20,000 streams of data. Brenna Berman, the city’s chief information officer, says the pilot is really testing two things: where certain types of green infrastructure can be most effective, and what’s the best data interface for the city to learn from the information being gathered.

“We would like to know at a high level whether the green stormwater infrastructure is working,” she says. Is it preventing rainwater from entering the sewer system? Which designs work better in hard rains versus soft rains? Which work better during long storms versus flash floods?

Despite a recent major investment in traditional water infrastructure (Chicago now has the largest wastewater capture quarry, water treatment facility and water treatment plant in the world), city residents are still experiencing significant flooding. About 181,000 flooding-related property damage claims totaling over $735 million were filed just in the past five years. Now the city is looking at how best to stem flooding using natural solutions working in concert with traditional infrastructure.

“We’re still getting the same amount of rain annually that we got [in the past] but it’s coming at a different rate than it once did,” says Berman. “We’re getting rain more quickly, rain for a shorter period of time, most likely due to global warming.” With changing rain patterns and different micro-climates across the city, “the same solution doesn’t behave the same in every location,” she says.

David Leopold, City Digital’s director of program management, says the data will have immediate and long-term applications. During a rain event, there could be relatively real-time data about how different pieces of infrastructure are performing, allowing the city to deliberately hold back or release water in certain scenarios.

When planning future infrastructure installations, he says, “the information provides a phenomenal feedback loop to test a design assumption. Is it working as intended, and how then might you improve it going forward?”

Observing those kinds of higher-level trends should be possible by mid-2017, when all six pilot sites are online. Data is already coming in from the first two locations. As more data becomes available, the city and partners (including Microsoft, Senformatics, UI Labs and Opti) will review it and refine the dashboard that allows the city to interact with the information. The portal allows a user to look at individual locations’ effectiveness or at all of the sites as a whole.

In 2017, the data will become available on Chicago’s open data portal, and by mid-year, Berman expects to be able to use that data to create guidelines and managing principles for the water department going forward.

“Green infrastructure itself isn’t new, but we’re taking it on its face that it works,” she says. “We talk about green infrastructure as if it’s a single thing, but really there’s several types of green infrastructure.” Until now, if an observer asked why the city was choosing a bioswale over permeable pavers or a rain garden, “we actually couldn’t [clarify] that,” says Berman.