Searching for Police Transparency From Charlotte to California – Next City

Searching for Police Transparency From Charlotte to California 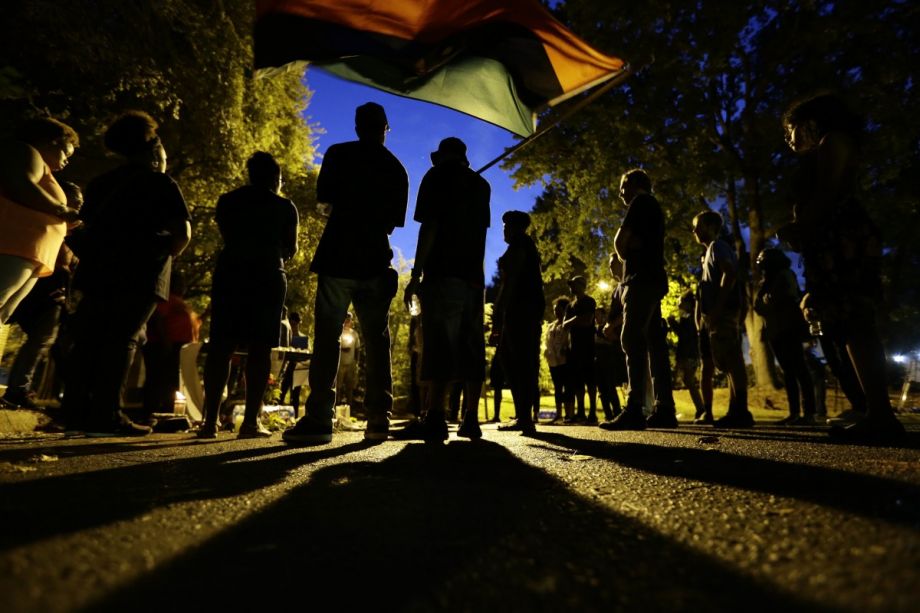 A vigil in Charlotte for Keith Lamont Scott, who was fatally shot by a police officer this week. (AP Photo/Gerry Broome)

With Charlotte, North Carolina, experiencing protests and violence over the fatal police shooting of Keith Lamont Scott, the city’s police chief today said that he had never promised “full transparency” regarding police video of Scott’s death and would not be granting it. He said he hopes to accommodate Scott’s family’s request to see the dashcam footage, but that the public should not expect to view it. A North Carolina law that prohibits the release of police recordings made via body or dashboard cameras (with only a few exceptions) is set to take effect in October.

Body cameras have been touted as a way to increase police accountability, but as the Washington Post has reported, officials routinely block or attempt to block access to footage. Only 3 percent of the country’s 18,000 police departments report police use of force, according to the FBI, and even where footage is being captured, regulations around its release vary widely. However, two new efforts were announced this week — one led by the ACLU and the other from the California Department of Justice — that are connected to improving transparency and empowering citizens when it comes to America’s police.

The ACLU began a campaign to introduce legislation in almost a dozen U.S. cities that would force police departments to disclose more about secret surveillance programs. The effort doesn’t single out body camera or dashcam footage, but rather takes aim at a lack of transparency around surveillance and the distrust it foments. From the ACLU:

The increasing, secret use of surveillance technologies by local police in cities across America, especially against communities of color and other unjustly targeted and politically unpopular groups, is creating oppressive and stigmatizing environments in which every community member is treated like a prospective criminal. Many communities of color and low-income communities have been turned into fishbowls, and some into virtual prisons, where their residents’ public behavior is monitored and scrutinized 24 hours a day.

“These technologies are invading our public spaces and creating a culture of fear,” said Hilary Shelton, director of the NAACP’s Washington bureau, in a statement. “This first wave of legislative efforts being taken today across the country is a critical first step to moving local surveillance out of the shadows, ensuring transparency and accountability, and protecting the civil rights of all Americans.”

The legislation calls for city councils to approve the purchase of new surveillance technology. The announcement comes on the heels of Bloomberg Businessweek’s revelation that Baltimore’s police department had been conducting extensive aerial surveillance without the knowledge of the mayor, state’s attorney, city officials or the public. The ACLU will introduce bills in nearly a dozen cities, including Washington, D.C., New York, Milwaukee, Seattle and Madison.

Data collection has also been at the center of calls for criminal justice reform in the U.S., and on Thursday, California announced a step toward scrutinizing police departments more thoroughly. The California Department of Justice and technology nonprofit Bayes Impact said URSUS will be America’s first statewide online database of police use of force. The tool, expected to go live in 2017, carries out a California law — also the country’s first — mandating that law enforcement collect and report any uses of force that result in serious bodily injury or death.

Where such data has been collected and shared, it often reveals precisely the dynamic that Black Lives Matter and other advocates protest. A special mayoral task force investigating the Chicago Police Department announced earlier this year that “the CPD’s own data gives validity to the widely held belief the police have no regard for the sanctity of life when it comes to people of color.”

As the Chicago Reporter has detailed, many believe that increasing transparency and data collection around police surveillance and use of force could be one key to guiding police reform. On the flip side, very few agree that a broad stop-and-frisk policy would contribute to improved police-community relations. Yet that’s exactly what Republican presidential candidate Donald Trump proposed in Cleveland Heights this week.

“He should really be careful because if we reinstituted stop-and-frisk all over this country, you’d see a lot more tension between police and communities,” responded New York City Mayor Bill de Blasio, on CNN Thursday. De Blasio has overseen a shift away from stop-and-frisk in New York after a judge ruled in 2013 that it violated the rights of minorities. “[Trump] does not understand how policing works,” de Blasio said.