Can Volunteer-Run Online Platforms to Support Neighbors In Need Meet Demand? – Next City 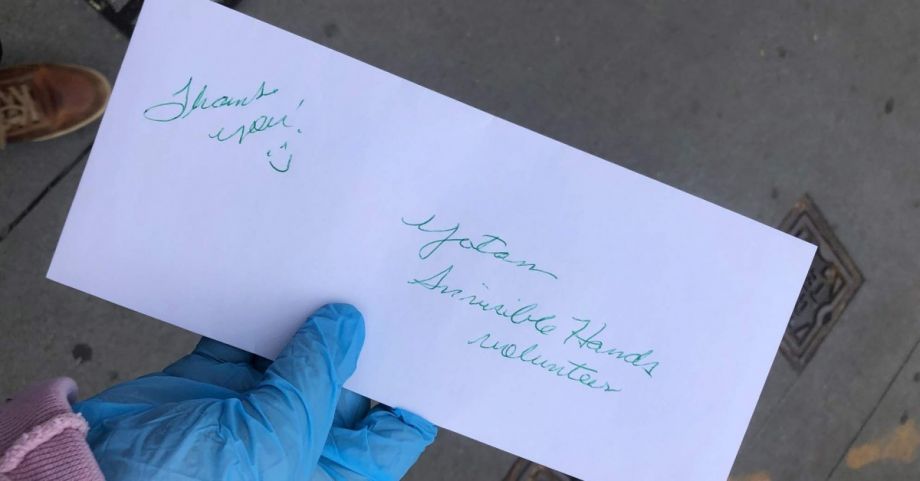 When 25 year-old Simone Policano first realized the magnitude of the novel coronavirus in New York, her first response wasn’t to run to the store to buy toilet paper and tuna cans; it was to act — quickly — to help others unable to get there.

“These are such chaotic times for all of us,” Policano, an actress who lives in Astoria, Queens, says. “We wake up wondering, ‘God, what’s it going to be like today?’ And it’s especially scary for people who aren’t able to do things on their own.”

What started as a Facebook post last Thursday very quickly became Invisible Hands — a website that pairs local volunteers with neighbors in need of support. them. Co-led by family friends Policano and Liam Elkind, a 20 year-old Yale University student on indefinite spring break, the platform invites any New York resident from a ‘high-risk demographic” to request at-home, contact-free delivery of groceries or supplies. The duo, along with fellow executive board members Mimi Aboubaker and Healy Chait, then works behind the scenes to “match” those delivery requests with offers from volunteers who live near the requester.

“We’ve been so inspired by the health workers on the frontlines fighting the crisis, and we just wanted to do a small part to help,” Elkind says. “We’re young, able-bodied people without medical expertise, but what we can do is the ‘grunt work’ of waiting in lines, running errands, and meeting people at their homes.”

Far more than just a small group of do-gooders, Elkind says more than 1,500 volunteers have signed up in the span of just a few days. He adds that multiple cities — “Boston, Chicago, London, Los Angeles, even a small, suburban town in Kentucky” — have reached out in hopes of replicating the Invisible Hands model. But it’s been more challenging, the organizers said, to make sure this website is actually reaching the people it’s designed to serve.

“We weren’t seeing many requests at first, but because things increased so quickly on the volunteer side, we now feel comfortable really promoting the service,” Policano says. To help reach those most in-need, the duo says they’re now sharing the website beyond their personal networks, translating their materials into multiple languages, and posting physical flyers around New York City neighborhoods — an approach that appears to be working.

“During this interview alone, we’ve had four missed calls,” Elkind jokes. Since the organizers anticipate that the number of requests will only grow — perhaps more quickly than what the four human ‘matchmakers’ can keep up with — Policano added that they’re in touch with a software developer to automate the matchmaking process, and potentially convert the website to a mobile application.

Meanwhile, in South Brooklyn, community organizers Whitney Hu and Katherine Walsh are taking the opposite approach: using a simple, color-coded Google sheet to facilitate an open-source system of “mutual aid.”

“It’s about getting support directly to the people most in-need,” says Walsh. “Maybe seniors need lunch delivered to them, maybe children need a story read to them.”

Created just one week ago after Walsh saw a similar spreadsheet in North Brooklyn, the South Brooklyn Community - COVID-19 Neighborhood Volunteers sheet allows residents to freely sign up for grocery delivery, meals for their children, “social” company through video chat and telephone, and other forms of support. Volunteers can sign up to offer those things, and behind the scenes, Hu, Walsh and other organizers make phone calls to ensure each request gets answered.

For Walsh, the need to protect her neighbors from the virus is personal. “Our community has some of the highest asthma rates in Brooklyn, so I’m very concerned about the coronavirus affecting our district in particular,” said Walsh, who grew up in Sunset Park and has asthma herself. “There’s no reason why your zip code should determine your health.”

Like Invisible Hands, Walsh says the people who’ve volunteered to offer services far outnumbers the people who have requested themt. With 150 volunteers in South Brooklyn alone, along with volunteer enclaves in sixteen other New York neighborhoods, Walsh says there are pros and cons to the decentralized approach, especially as circumstances change so rapidly.

“We’re doing the best we can to self-organize, but there’s only so much you can do with a neighbor-to-neighbor effort. What we need now is leadership from our state officials,” said Walsh, who, after years of community organizing and working as Head of Cities, States, and Regions for CDP Carbon Disclosure Project, is running for New York State Assembly District 51.

As more pop-up neighborhood efforts emerge, including globally applicable models like the #ViralKindness postcard project, the question of formal institutional involvement is crucial. Suzanne Myklebust, Deputy Director of Public Affairs at the New York City Department of Aging, said her department has received a number of calls from volunteers asking what they could do to support older adults. The Department of Aging, along with other city agencies and community partners, are working together to identify volunteer opportunities that can help meet critical needs, including assistance to COVID-19, though Myklebust maintains that the “safety and well-being of all residents” are a priority.

The need to maintain strict physical distancing for public health and safety has been a challenge for Invisible Hands, too. “The greatest difficulty with all of this is that people feel lonely, and we can’t come into their homes for tea and cookies, even though some have offered,” Elkind says. “But we can talk to them on the phone and engage with them so they have some form of connection.”

Elkind described the connection that one of his deliveries sparked. “I just made a delivery yesterday to this woman named Carol on 106th street, and afterwards, we talked on the phone about how she’s doing and how she’s sad she can’t hang out with her grandsons. But after talking to her, I told her she can call or text me anytime,” Elkind says. “If there’s any silver lining from all of this, it’s how wonderful it is that all of these new connections are being made.”

If you are in need of aid or want to volunteer in your local area, here are two lists of mutual aid networks springing up around the country. It’s Going Down and Mutual Aid Disaster Relief. Use these volunteer-run lists to search for a mutual aid network in your area or to start your own.