Can NYC’s Affordable Housing Co-Ops Survive the Next Big Storm? – Next City

Can NYC’s Affordable Housing Co-Ops Survive the Next Big Storm? 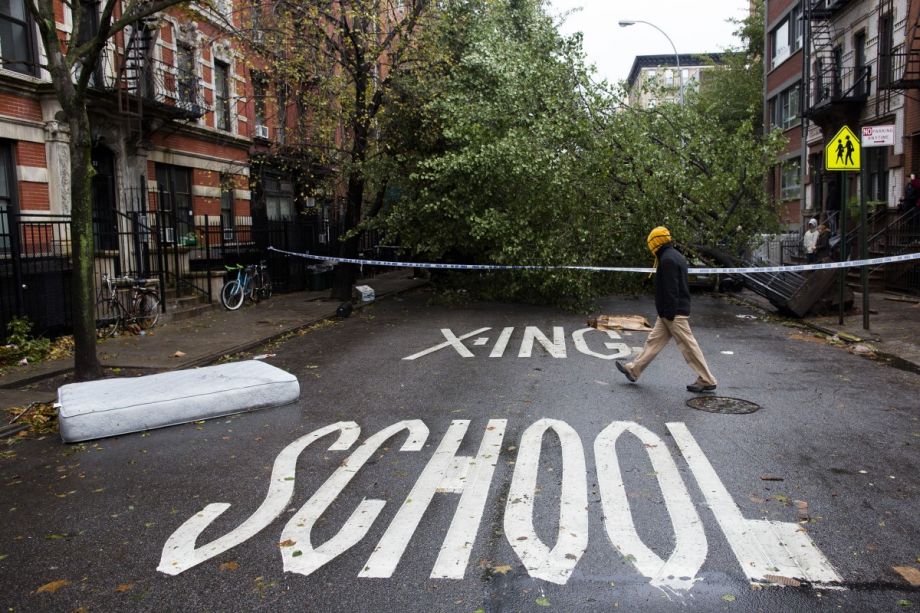 The brick apartment building at 414 East 10th Street, in the East Village of Manhattan, is in Ana Ruiz’s blood. Her family moved there in the 1950s. In 1998, she helped convert the building into an HDFC cooperative, creating affordable homeownership opportunities for the building’s tenants. As part of the conversion, she personally oversaw a two-year renovation process, which required each existing tenant to take turns vacating their apartments, then ensured they had the opportunity to buy into the converted co-op, at just $250 per unit. She remains a shareholder and serves as property manager.

Still, nothing prepared Ruiz for what happened during Hurricane Sandy, whose six-year anniversary is this fall. Just two blocks from the East River, the building’s basement was flooded to the ceiling, the boiler damaged, the electricity out. “It never occurred to us that we would get water,” she says. “Nobody told us that could actually happen.”

Now Ruiz lives with the knowledge that “there’s gonna be another Sandy.” So on an early morning this June, she guided a team through her building to conduct a “resiliency audit” — essentially a building check-up to analyze everything that may be affected by New York’s next major storm. “We need suggestions,” she says. “I see some people sitting back, but I know we need to prepare this building.”

These resiliency audits are the product of FloodHelpNY, a post-Sandy project of the Center for New York City Neighborhoods, funded through the New York Governor’s Office of Storm Recovery and New York Rising, another state program. It’s the first step for buildings to put resilience measures in place, potentially lowering their flood insurance premiums, says Rachel Stein, deputy director of sustainability and resiliency for the Center for New York City Neighborhoods.

Free audits, led by the national affordable housing nonprofit Enterprise Community Partners, bring a small team of building professionals — including engineers and surveyors — to tour multifamily building basements, roofs, and public spaces. At 414 East 10th, the audit team noted everything from boiler damage during Sandy to cracks in the surrounding pavement. The team is preparing a report that will break down the ways Ruiz and her fellow shareholders can make their building more resilient, to be explained in full during a counseling session.

Enterprise has audited buildings for storm resiliency in a number of neighborhoods across New York City, but the Lower East Side and East Village neighborhoods hold unique challenges, Downs notes. Ruiz’s is one of many cooperatives, tightly packed into blocks all the way up to the East River. The buildings were originally constructed in the late 19th and early 20th centuries.

Many of those buildings were rundown, burnt out or dilapidated in the 1970s-80s, according to Alex Lee, a housing organizer and weatherization project coordinator with Cooper Square Committee, an organization founded in the area in 1959.

In the late 1970s, as buildings fell into disrepair across New York, the Department of Housing Preservation and Development created the HDFC program to allow tenants of abandoned and foreclosed buildings to buy their apartments from the city for a minimal price. For many years, buying into converted cooperatives under the program cost $250; today it costs $2,500. To keep units affordable, income ceilings were imposed on future buyers, alongside flip-tax provisions to deter anyone from making a quick profit. Tax subsidies were put in place to keep ongoing costs low.

The program took off in the Lower East Side, Lee says, with many residents contributing sweat equity before buying their home. Today the area boasts one of the highest concentrations of HDFC co-ops in the city, according to Lee. But HDFCs operate under varying degrees of financial health. At least 27 percent are in a stage of physical or financial trouble, according to a report by DNAinfo.

With their many lower- to middle-income shareholders, it’s difficult for to collectively set aside enough cash for maintenance and modernization of their buildings — especially as the cost of living has dramatically increased in New York. These pre-war buildings can require significant, oftentimes costly maintenance. Proactive resiliency efforts can fall by the wayside.

Sandy proved how vulnerable these older Lower East Side buildings are to flooding. Dense blocks of housing leave little room for landscaping measures, which could help reduce water damage. Basements full of mechanical equipment, often outdated, easily flooded. Walk-ups and buildings with older elevators caused safety concerns; many co-ops did not have evacuation plans in place. Prior to Sandy, Ruiz says, residents didn’t realize a hurricane could cause that type of damage to their home.

Cash isn’t the only limitation for these affordable housing cooperatives. Unlike other affordable housing developed today in New York, owned by nonprofits and real estate firms and professionally managed, HDFCs like Ruiz’s co-op are run by shareholder boards who may not all be on the same page when it comes to property management, Downs explains. Outreach and community organizing is “instrumental” to resiliency work in the area, he says.

On outreach, Enterprise partners with Cooper Square Committee, which has gone door-to-door to enlist buildings in the FloodHelpNY program, and hosted a number of community meetings around the topic of resiliency.

“[Co-op] board members won’t necessarily know what a flood-elevation certificate is, nor does their building necessarily have flood insurance,” says Lee. “When they become informed of this program and how it can benefit them, they’re fascinated.”

Cooper Square Committee’s resiliency outreach meetings have attracted crowds of HDFC shareholders, says Lee. “There is a lot of concern in the building [about future flood damage],” says Ruiz, who was approached in person by Lee about the program. “I believe it’s one of the most important things for us to do.”

Ruiz says she and her fellow shareholders are prepared to tap into the building’s cash reserves to fund resiliency measures presented by Enterprise. Cost remains a major concern for HDFCs following the audit, specifically the challenge of keeping a healthy reserve fund and avoiding debt as much as possible.

Though audits are funded, there is no clear funding source for HDFCs to tap into funding the suggested renovations. That challenge often comes up in Enterprise’s counseling sessions, Downs says. For buildings with fewer resources to leverage, he notes, “we help them think about creative ways to leverage small grant programs and other opportunities.”

Cooper Square Committee is establishing long-term relationships with HDFCs that participate in FloodHelpNY, ensuring their path toward resiliency doesn’t end with the audit. “The next step is up to them — how do they want to remain proactive?” asks Lee. “With HDFCs, there is no cookie-cutter approach.”

“You have to be patient,” says Lee. “You have to think toward the future but not get ahead of yourself, or else you overwhelm people in the building and they’ll lose focus.”