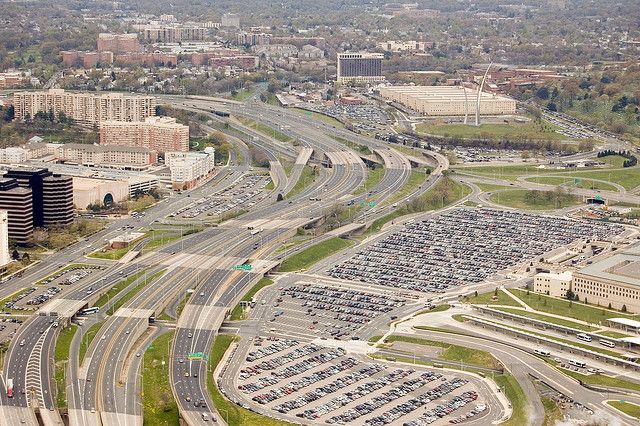 The Shirley Highway in Northern Virginia, which gradually opened its once-exclusive bus lanes to cars. Credit: Aaron Landry on Flickr

Planners often promote bus rapid transit (BRT) as cheap to build and more flexible than rail transit. But that flexibility also makes it even cheaper to dismantle. A stroke of the pen can completely destroy a BRT line.

Even the highest quality BRT systems run in lanes that could just as easily serve regular drivers. All it takes is one government decision to allow private cars on a BRT busway, and then blam: What you have isn’t really BRT anymore.

That’s exactly what may happen in Delhi, India, where the country’s supreme court city’s high court is considering forcing the city to open up bus lanes for automobile traffic, amid complaints from drivers that it’s “unfair” to dedicate lanes to other road users. Delhi has 16 million residents, and fewer than 20 percent of them use cars. Nevertheless, it’s a serious possibility that the court will open the busways, effectively outlawing BRT (the city plans on appealing to the nation’s supreme court if the regional court rules this way).

Here in the Washington Metropolitan Area, we have our own local example of a BRT line that has been systematically downgraded by being opened to cars, reducing the quality of bus service.

The Shirley Highway Busway was the first exclusive bus facility on a U.S. urban highway when it opened in 1969. It was so successful that in the early 1970s, over 50 percent of all the passenger traffic on the Shirley Highway, the portion of I-95/I-395 from Woodbridge, Va. to the Potomac, traveled via bus.

Despite this success, Virginia opened up the busway to car traffic after a few years, beginning with HOV-4 users in December 1974. Since then, the restrictions on cars have been periodically reduced, and soon even single-occupant vehicles will be able to use the road, thanks to Virginia’s HOT lanes project.

Wherever you build lanes that cars could use, car drivers will want to use them, and will exert political pressure to do so. Every BRT project that exists or is planned anywhere could be converted to a road for cars, without spending an additional dollar on construction.

This is not to say that BRT is useless. It certainly is not. BRT belongs in all our big cities, as one piece of a larger multimodal transit network. But the same flexibility and low cost that makes BRT attractive in many locations is simultaneously the reason it cannot be trusted to deliver on long-term promises in the same way as rail. It is easy to eliminate, and it has too great a history of being eliminated.