Building Equity By the Tracks – Next City

Building Equity By the Tracks 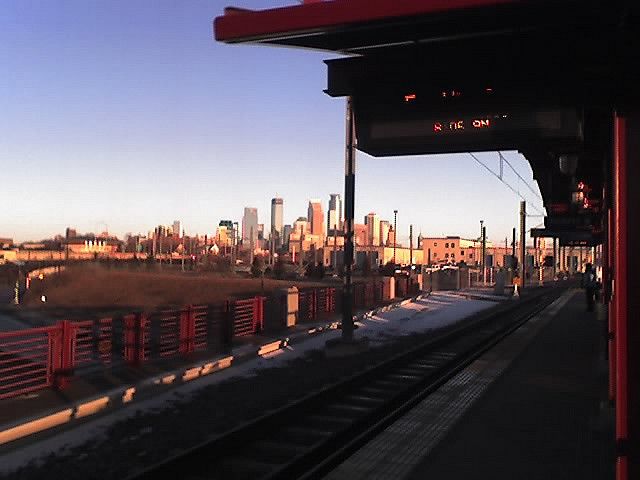 MINNEAPOLIS — Jay Bad Heart Bull works the crowd gathered near a white hospitality tent that looks strangely formal, located as it is on a grassy embankment along busy Franklin Avenue between a new rail stop and an interstate overpass. Phillips is one of the poorest neighborhoods on Minneapolis’ south side — a place most folks pass through on their way to someplace else — but it’s also home to one of the largest urban populations of Native Americans in the country.

“Boozhoo, my friend!” Bad Heart Bull bellows in Ojibwe, even though he is Lakota Sioux. A local community advocate who knows this place inside out, he’s here on a bright spring morning to introduce what could be a new beginning for neighborhoods like this.

It’s called transit-oriented development, or TOD, and nationally it’s one of the hottest trends in urban planning, though in Phillips it’s going to have a decidedly homegrown flavor.

Developers in transit-hungry cities from Charlotte, N.C. to Phoenix, Ariz. are snapping up previously ignored sites near the train, the trolley or the dedicated bus-way to build upscale condos, coffee houses and retail shops. They are creating thriving new communities near transit stops and reviving forsaken old ones that were written off for decades as the poor side of town.

But this infusion of money can be a mixed blessing for struggling families like those in Phillips, who stick out the bad times only to find themselves pushed out when real estate values go up.

Not this time, though, if Bad Heart Bull, CEO and president of the Native American Community Development Institute, has anything to say about it. He is working hand in hand with the Local Initiatives Support Corporation (LISC), a national non-profit that helps revitalize distressed communities across the country, to see to it that when the bounty comes back to inner-city neighborhoods, low-income people get a seat at the banquet.

LISC is pushing hard to make sure that new rail lines going into towns across the country aren’t just magnets for high-end investments, but also include the services and amenities low-income families need: Affordable housing, health care, financial planning assistance, cultural richness. The problem, of course, is that a revved-up real estate market isn’t likely on its own to provide housing or shopping for folks of limited means who’ve lived in these corridors for decades.

Bad Heart Bull gets to the heart of the problem. “The question is: ‘How do you build in affordability?’” he says, taking time out from serving breakfast al fresco at what will soon be an open-air art gallery and market. This new Cultural Arts Marketplace is planned for the grassy median that divides Franklin Avenue between the freeway and light rail underpasses. The viaduct’s blank cement walls will glow with iridescent murals depicting neighborhood and Native American life.

Back when the Twin Cities’ Metro Blue Line opened in 2004, most of the planning was set around major destinations like the airport or the Mall of America. Not a lot of thought was given to close-in neighborhoods like Phillips — which got a station at East Franklin Avenue, but it’s a half-mile from the business district with a forbidding interstate overpass in the way.

“The community didn’t really have any input,” remembers Bad Heart Bull. “They just said “We’re building this thing and Franklin is one of the first stops.’”

This time Bad Heart Bull, like local activists nationwide, is working with LISC to ensure the new development fits the people already here, and that those people have a voice.

The median strip marketplace and underpass artwork, for instance, are part of a larger American Indian Cultural Corridor planned by Bad Heart Bull’s development group and made possible with help from LISC and key funding partners such as ArtPlace America.

“Whenever we’re planning around TOD,” he said, “LISC is at the table working on answers.”

LISC has brokered $190 million in direct TOD investments nationwide, including loans, grants and tax credits. Those investments, in turn, have leveraged $890 million in total development activity, or enough to create 2,250 affordable homes and apartments and more than half a million square feet of commercial space.

“No, it’s not the single silver bullet,” cautions Richard Manson, the LISC vice president monitoring the effort. “Historically, you’ve had places like the South Bronx that were dirt poor yet transit-rich. But we do believe that the world is changing, that transportation and commuting costs will continue to rise, that neighborhoods with transit will be the communities of choice. The question is, who gets to do the choosing?”

This time around, community input and influence have been cranked in from the start. LISC is among the leading participants in the Twin Cities’ regional Corridors of Opportunity Initiative that brings together local governments, transit and housing agencies, philanthropies and non-profits. The idea is to make sure planned lines like the next phase of the area’s light rail system — an 11-mile Central Corridor/Green Line connecting downtown Minneapolis with downtown St. Paul — produce maximum benefit with minimum displacement in the low-income communities they cross.

“We’ve helped create a space for our partners, especially our community developers, to have a seat at the table,” explains Andriana Abariotes, executive director of Twin Cities LISC.

When, for instance, the Aurora St. Anthony Neighborhood Development Corp. had an opportunity to acquire an entire block along the new line’s University Avenue axis just west of downtown St. Paul, LISC helped it partner with an experienced developer and obtain tax credit financing. The $13.7 million project combines new construction with an adaptive rehab of a historic dairy, thereby locking in 57 units of affordable housing for the working-class Frogtown/Rondo neighborhood.

That lock-in is key, Abariotes says, and a main reason LISC joined with leaders from the Minneapolis/St. Paul region and a special Funders Collaborative, including Living Cities, Inc., to set up a TOD-focused initiative called The Big Picture Project. It’s a master planning and implementation effort to identify and maximize affordable housing opportunities up and down the Central Corridor.

Still, the concept is not without critics. And not just from the usual NIMBYs, but progressives who argue that a better way to help low- and moderate-income families is to help them move out to the more job-rich parts of the metro.

The plan to develop hundreds of affordable apartments along the Central Corridor only “intensifies racial segregation,” says Professor Myron Orfield, director of the Institute on Metropolitan Opportunity at the University of Minnesota and something of a national guru on the spatial dynamics of racial segregation and economic opportunity.

But that all-too familiar past — the movement of big employers to the metropolitan fringe, stranding the poor in center cities — may not be prologue. Not only was sprawl wasteful of time and energy, but the new digital workforce seems in search of something else, something more exciting than suburban tract housing and monotonous car commutes. To stay competitive in a changing labor market, savvy corporate employers are taking the hint and gravitating back to the urban core.

In fact, the beauty of locating affordable housing along transit corridors, TOD advocates say, is that residents benefit not only from better access to far-flung employers like the Minneapolis airport, but also the economic growth within right in their neighborhood.

“We’re trying to create choices for people,” says Dan Bartholomay, CEO of Rail-Volution, a national non-profit out to promote transit-fueled community development. He argues that putting affordable housing near transit stops does not intensify segregation, but instead gives low-income people a share of revival’s spoils.

“Transit corridors open up economic opportunity to the folks who live around them in several ways,” he says, citing lower household transportation costs, better access to distant job centers and new opportunities close to home.

“The question is, how to take advantage?” Bartholomay says. His answer: Securing places within the corridors for families of limited means.

Along University Avenue in St. Paul, gentrification is perceived as a threat. So is the short-term impact of four years of noisy, dusty Green Line construction and the loss of curbside parking. It’s a triple if temporary whammy that storeowners complain has cut business by a third. And it hasn’t helped the Corridor’s three largest ethnic minorities — African Americans, East African refugees and Southeast Asians — who don’t always agree whether the coming of the light rail train is a blessing or a curse.

For its part, LISC counts TOD nationwide as a blessing, if impacted communities get organized and if they get the requisite technical and financial help, as did Aurora St. Anthony, to take full advantage.

Beyond the Twin Cities

Perhaps nowhere are the TOD opportunities greater than in Arizona, where Phoenix is extending its Metro light rail system east into downtown Mesa, the second largest city in the greater Phoenix metropolitan area.

Teresa Brice, executive director of Phoenix LISC, estimates that 43,000 riders take the line daily since its startup in 2008, yet almost half the real estate inside the planning corridor remains vacant. That’s a huge opportunity, she argues, “to reintroduce the concept of density to the Valley.” Single-family sprawl was practically religion in the Valley until overbuilding and the rising cost of car commuting helped make Phoenix a poster child for the recent mortgage foreclosure collapse.

“The old real estate come-on was, ‘Drive until you qualify,’” she says of the outward push. Then first-time buyers discovered the true cost of car-dependent living.

Today a lot of those suburban ranch houses are investor-owned, Brice points out, and recent federal efforts to repopulate them with subsidized buyers have been scattershot and oblivious to the role location plays in household economics.

Brice cites studies by the Center for Neighborhood Technology, a think tank, showing that homeowners in distant suburbs pay substantially more — in both time and money — for transportation than do their transit-using city cousins.

So two years ago, LISC and the Phoenix-based Raza Development Fund (RDF), each anteed up the first $10 million to create the Sustainable Communities Fund in order to preserve or create 1,000 units of affordable housing plus jobs-generating commercial development along the rail corridor.

To date, LISC alone has deployed almost $5 million, and 375 units of housing are under construction or in pre-development; RDF has invested $5.4 million and produced 354 units of housing. An early commercial loan will finance adaptive reuse of a vacant building into a locally owned bookstore, a new restaurant and a small business incubator space.

The idea, Brice says, is to “create the spark to revitalize an aging commercial corridor at the west end of the rail line.”

Similar efforts are happening across the country. Through a like-sized start-up fund in Boston, LISC is investing with local partners of the Fairmount Collaborative in TOD developments near four new commuter rail stations in the Dorchester, Mattapan, Roxbury and Hyde Park neighborhoods.

TOD means back to the center, back to transit, back to spending precious time and treasure on things and places more satisfying than gasoline and left-turn lanes.

“We see this as an unprecedented opportunity,” LISC’s chief executive Rubinger said in announcing its Phoenix commitment, “to build on our investments here and take it to a whole new level.”