Building Capacity Together Through Community Based Learning – Next City

Building Capacity Together Through Community Based Learning 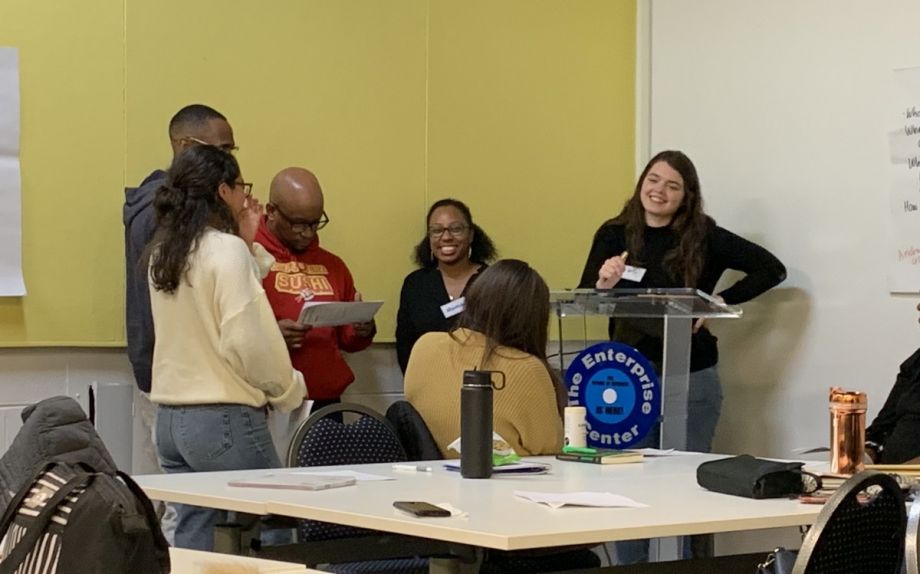 Peals of laughter, hurried attempts at explanation, second-guesses, broadening smiles. Not what you’d see in most planning and urban studies classrooms, especially in the evening after most students have worked a full day. Participants sit in chairs, back to back, one holding an abstract diagram trying to convey its structure to another student, who attempts to reproduce the shapes while unable to see what is drawn on the paper. An exercise in listening and communication. Not where you’d expect to see it — not on campus, but at the offices of a local community development corporation.

Students turn to face each other, showing the fruits of their collective labor. The laughs get louder, cheeks get redder, the surprise of recognition of what a partner meant to say, what you meant to hear. Student partners are older and younger, many different races and classes, some are university students and some are neighborhood residents. Not the setting of most classes on urban planning and community participation. A novel way to learn about the challenges of communication and shared perception.

Students show off their ability to communicate through a drawing exercise. (Photo courtesy Drexel University)

Students in Drexel’s interdisciplinary Urban Strategy masters program are primed to undertake these challenges: it’s all in a night’s work. In this case, the class is Civic Engagement and Participatory Methods, and it is taught as a Side by Side class. Fifty percent of the students are from Drexel; the other half are enrolled in the class as representatives of the West Philadelphia neighborhoods that surround the campus. They are all given an identical charge: to spend ten weeks reflecting and improving their own leadership styles, their ability to function in a small group, their intercultural communications skills, their ability to run a public meeting, influence local media, and more. It is hands-on and practical, while it also digs deep into the challenges faced by Philadelphians historically and today. Students from these diverse backgrounds sit together in fellowship, discussing the ideas of pioneering sociologist W.E.B. DuBois, pragmatist philosopher John Dewey, and the latest research on entrenched poverty and gentrification, pulled from the headlines.

Side by Side experiences like these are core to the masters in Urban Strategy. The program is built from an innovative curriculum co-authored by experts in planning, design, public health, civil engineering, economics, political science and more. Rather than relying on a legacy 20th century approach to urbanism, Drexel bases its approach on building the skills required to solve today and tomorrow’s complex urban problems, regardless of disciplinary boundaries. Graduates have gone on to do everything from creating Business Improvement Districts, expanding voter education and engagement for the 2020 election, and upgrading small batch manufacturing for the City of New York, each reflecting the diversity of what is possible with a flexible curriculum that provides students with close mentorship and individual support.

The Civic Engagement and Participatory Methods course is the heart of the Urban Strategy experience. It is designed to push students well out of their comfort zone, into an exploration of implicit biases and received wisdom. In the second week, we practice active listening by sharing brave space — talking about the racial and cultural biases each of us holds. In this way students build trust across lines of difference. In a community meeting scenario, students practice theater skills to dramatize and respond to a planner’s proposal to sell off public housing to a private developer. That hypothetical classroom simulation was mirrored in reality the week after class as the Philadelphia Housing Authority declared its intention to sell off public housing towers that stand mere blocks from the classroom. The line between learning and practice is often blurred, especially because of the presence of neighborhood students, many of whom live in the areas most deeply affected by Philadelphia’s ongoing urban transformation.

It is not always easy, not always smiles. Early on, one student brought up a cultural norm the instructor had failed to take into account: in some cultures, it is considered disrespectful to offer eye contact. A conversation followed about what assumptions we each bring to the table when communication norms are in play. Discussions of the legacy of slavery, redlining and mass incarceration while productive, are challenging and sometimes upsetting for those who have faced those experiences. That is when the trust that the class has built up over weeks together comes into play. Students face up to their collective responsibility to hold each other’s stories, to listen attentively and with humility. As the weeks go on, this group gathers skill and strength, culminating in their own proposals for community organizing projects that will transform the spaces they inhabit in ways large and small.

Drexel University is known regionally and nationally as a major force powering the redevelopment of the neighborhoods around the Amtrak 30th Street Station, one of the busiest transit hubs in the United States. Drexel’s commitment to civic engagement is deep and throughgoing. The Urban Strategy program advances Drexel’s connections to the communities that surround the university by elevating local knowledge, and engaging in empathetic, equitable exploration of our shared urban future.

Andrew Zitcer is an assistant professor and the director of the Urban Strategy program at Drexel University in Philadelphia, PA. His research explores arts as a catalyst for community and economic development, and the importance of cooperative practices to foster economic democracy.