Bringing Some New Ideas to an Older Part of Amsterdam 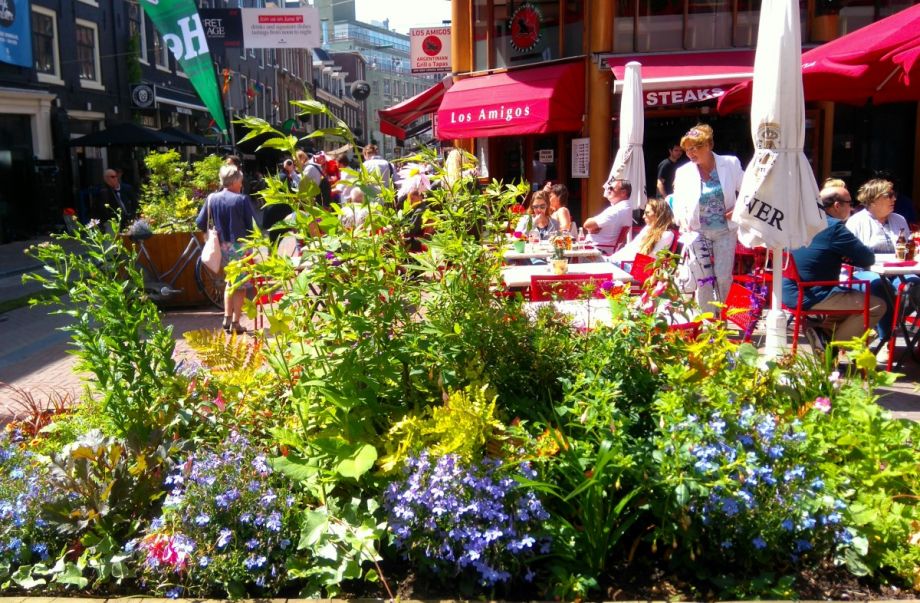 By night, Reguliersdwarsstraat is one of the busiest streets in central Amsterdam. A hub for the city’s LGBTQ community, its restaurants, bars and clubs attract large numbers of locals and tourists alike. By day, however, the picture is markedly different. Despite being just steps away from Amsterdam’s famous floating flower market, the area has struggled to attract the daytime crowds.

Business owners along the stretch realized they needed to make the main thoroughfare and the smaller streets leading off it cleaner and more attractive. But what started out as a simple plan to ‘greenify’ the area using plants and flowers soon turned into something far more ambitious: the chance to put Reguliersdwarsstraat on the map as Amsterdam’s ‘most future proof street.’

As one of the most politically progressive cities in the world, Amsterdam’s sustainability agenda is suitably ambitious, and with progress on goals like significantly reducing energy consumption and increasing green energy production by 2020. As Tanja Van der Knoop, founder of the nonprofit Green City Buzz points out, however, much of the work being done on sustainability has concentrated on newer parts of the city.

“Making new buildings and homes green is relatively easy, but what about older areas?” Van der Knoop says. “[Reguliersdwarsstraat] is the first time that there has been a concerted effort to make an existing urban area more liveable and sustainable.”

Working in partnership with the Secret Village business association (named after a large garden hidden behind several of the street’s more upmarket establishments), Green City Buzz is leading this drive towards sustainability, putting the business case for going green front and center. The two-year project began with a year of planning in 2017, and will now see those plans put into action over the remainder of 2018, focused on what Van der Knoop calls the ‘low hanging fruit’ — easy ways to pool efforts and resources and make a difference.

Around a thousand plants have been planted so far, and each day a hand-pulled cart carrying old beer kegs filled with canal water passes through the neighborhood to water them. Already, businesses with greenery outside their premises have reported notable upturns in custom, while the area is also more pleasant and liveable for residents.

There is also the beginning of a movement towards a circular economy: Coffee grounds are regularly collected from cafes and and restaurants as well as from TQ, a tech hub that’s home to dozens of start-ups. Along with other types of organic waste, the coffee grounds are composted and then, in a privately-owned underground parking garage, used to grow oyster mushrooms, to be used in local restaurants. As well as getting some free produce, restaurants promote their green credentials and stand out in the crowded Amsterdam marketplace.

For Arik Day, community manager at TQ, being part of this circular economy offers more than just the chance to monitor who the biggest coffee addicts in the building are. “We see a chance to move in the right direction and become a hub and sustainability leader for the community,” Day says. “We’re looking into ways we can work with local businesses to reduce waste and increase efficiency. Could we offer hospitality businesses some storage space? And can we install solar panels on our roof and share the energy they produce with our neighbours?”

The initial initiatives have shown how picking the ‘low hanging fruit’ can create value, making more ambitious goals more likely, like collective renewable energy. By working together, businesses can reduce the cost of installing solar panels or windmills, for example. Applying for subsidies and permits — not easy to obtain in central Amsterdam, where historic buildings are subject to strict conservation rules — becomes less costly and time-consuming.

Over the past few years, Casteleijn explains, the picturesque but narrow streets of central Amsterdam have been hit by a perfect storm of circumstances, making them more crowded than ever. The number of tourists visiting the city risen dramatically, while the upturn in the global economy means that the construction sector is now back in full swing, and on top of all that, people are ordering more and more goods for home delivery. As a result, on any given morning there can be as many as 20 trucks coming to Reguliersdwarsstraat — causing pollution and discouraging foot traffic.

In response, with the involvement of most local entrepreneurs, Green City Buzz is coordinating efforts to pool resources and combine deliveries. “We’re working with the municipality as well as the government to establish a logistics hub for food,” says Casteleijn, adding that business owners have expressed a willingness to be flexible on delivery times and even a shared supplier if they can benefit from the financial savings that come with smarter logistics. Bars and restaurants outside of the Secret Village association have also expressed an interest in joining.

Scaling up circular waste management beyond coffee grounds will also help reduce the daily number of trucks on the street. At present, as many as nine different waste management trucks collect from the Secret Village each day (Amsterdam privatised its garbage collection several years back). A compactor will soon be installed in the neighborhood, substantially reducing the volume of waste that needs to be collected, while also helping further drive down the frequency of garbage trucks coming through the area, freeing up the streets and making it more attractive during the daytime.

The Secret Village project may only cover a single, well-defined area, but Green City Buzz is hopeful that the ‘green tide’ will soon spread through Amsterdam, encouraging other neighborhoods or even single streets to pool resources and expertise. “We’re showing that, even in the oldest parts of the city, moving towards sustainability is not only possible, but also desirable from a business point-of-view, as well as for reasons of liveability and simple aesthetics,” concludes Van der Knoop. “With businesses and the municipality on board, we can scale it up and make a real difference.”

David Hewitt is a freelance writer and editor focusing on climate, sustainability and conservation. He divides his time between his native England and Spain, where he is completing a Ph.D. on modern Spanish history and society.