The Year of the Bike Commuter – Next City

The Year of the Bike Commuter 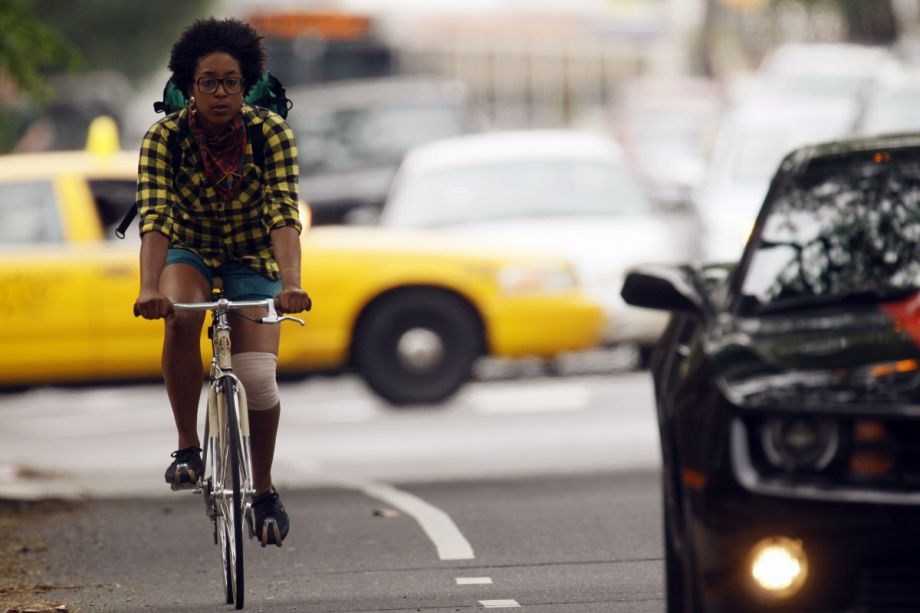 From cycletracks to helmet laws, 2014 has been a big year for bikes. No longer the domain of the hemp-wearing Portlandia set, bike lanes have been crowd-funded, sponsored by businesses and rolled out across the conservative Midwest. Meanwhile, bike-shares are proving great data sources to track who is riding where — raising questions of equity and safety — and helping to shape policy along the way. In the New Year’s Eve spirit of looking back, here’s a roundup of trends, studies, and controversies that have made headlines over the last 12 months.

As shares across the country struggled to stay in the black, Kansas City took to the Internet, hoping to fund parts of its bike-share with civic platform Neighbor.ly. We reported on the move in January, but it would be only the first in a slew of civic crowdfunding projects this year, from protected bike lanes to new parks.

This conclusion probably came as a surprise to bike advocates, used to “battling ‘the business community’ for every inch of road space,” wrote Michael Andersen of People for Bikes in a February Guardian article. But, echoing an earlier report, Andersen quoted VPs and investors, arguing that between increased productivity among heart-healthy workers and repeat customers to downtown shops, the private sector had plenty of reasons — and numbers — to support good bike infrastructure.

On March 31, Citi Bike released data about everything from trip time to user demographics. In a Streetsblog NYC post, Stephen Miller pointed to several patterns that emerged from this so-called “treasure trove,” including a correlation between surprise MTA service disruptions and ridership spikes. According to Sarah Kaufman of the Rudin Center, quoted in the piece, this substitution showed “the potential of Citi Bike to become really intricately interwoven into the New York City transportation landscape.”

From the vantage point of December, this safety-in-crowds logic might seem like a no-brainer: More bikers create better visibility for all bikers, encouraging motorists to be more careful. But a report released in April confirmed this theory with numbers. The Alliance for Biking & Walking report was covered by Emily Badger in the Washington Post, who wrote that the “cities with the largest share of cyclists have the fewest cycling injuries.”

May: Bikers were proved to be the happiest commuters

This may also seem like a no-brainer, but a study published in Transportation applied the scientific method to the simple fact many of us realized when the training wheels first came off. The report was published earlier, but headlines seemed to catch up in May; According to the survey of 13,000 randomly selected people, “cycling elecited the most positive emotions” Streetsblog reported.

June: Everyone argued about head injuries in cities with bike-shares

Despite a Washington Post headline claiming otherwise, a study published by the American Journal of Public Health showed head injuries dropping in cities with bike-shares. The paper’s confusion came from the study itself, which highlighted head injuries as a proportion of all injuries. However, as Streetsblog pointed out in June, the way headlines framed this data was somewhat misleading — because head injuries, and all injuries, dropped 14 and 28 percent respectively after bike-share systems were implemented.

July: Bike-shares were shown to bolster the transit network overall

According to a July CityLab story, past research had shown the potential of bike-share to decrease car ownership. But a study in the Journal of Transport Geography took those findings further, examining patterns in Washington D.C. and Minneapolis. Basically, it found that in dense urban environments, bike-share acted as a substitute for shorter transit trips, while in more sprawling cities, it became a connector between far-apart stops.

August: Bike-shares were shown to have no recorded fatalities

Although bike-shares had sprung up in 36 cities since 2007, not a single fatality had been recorded. That (rather shocking) statistic was reported by Reuters in August, and verified by three alternative transportation experts. In New York, experts guessed that Citi Bikes’ tank-like shape might have something to do with the optimistic numbers.

Citing Department of Transportation statistics, the New York Post called attention to this uptick in September — from 244 in 2012 to 316 in 2013 (2014 numbers weren’t available). Injuries were concentrated in Central Park, with 29 and 20 pedestrians injured by cyclists in 2012 and 2013 respectively. To compare, wrote Laura Italiano and Andrea Hay, “21 pedestrians were injured by bicycles in all of Queens” in 2012.

An alarming report released by the Governors Highway Safety Association in October called attention to an increase in cyclist fatalities from 2010 to 2012. As Governing reported, the research did not make clear whether this 16 percent uptick was the result of more people cycling over the same period.

November: But cyclist fatalities were way down overall

Bike advocates were quick to critique the GHSA report, with backlash lasting into November. Using data from the US Department of Transportation, the League of American Bicyclists called the report’s two-year focus “misleading,” outlining a long downward trend in cyclist fatalities (even as ridership rose) from 1977 to 2009. An Urbanful post from November 3 highlighted one reason cyclists were up in arms, noting the report’s focus on helmet use and alcohol impairment as causes of death — instead of, say, speed limits and car-centric design.

December: Meanwhile, children’s helmet laws were shown to work…but possibly only because they decreased ridership

A Health Economics paper covered by Aaron Carroll of The Incidental Economist in December sported the intriguing title “Bicycle helmet laws reduce injuries for kids, but maybe not in the way you think.” Basically, the paper found that children’s head injuries decreased in areas with helmet laws, but so did non-head bicycle-related injuries. Meanwhile, helmet laws were also associated with upticks in “head injuries from other wheeled sports,” like skateboarding. Sadly, Carroll wrote, this likely meant that “bike helmet laws worked by getting fewer kids to ride bikes.”