Cleveland Gets Cheap Bike-Share With Unusual Funding Deal – Next City 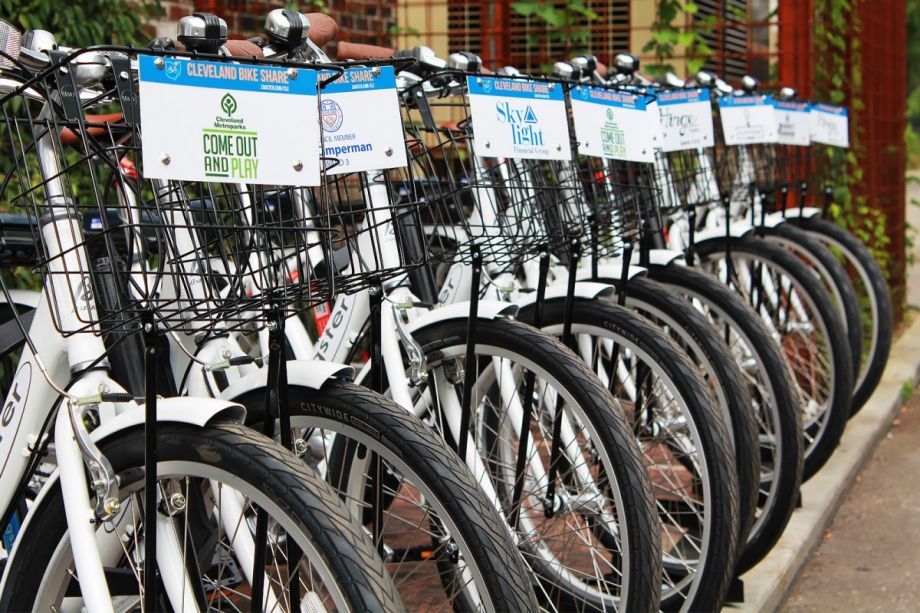 The other day, Cleveland unveiled a brand-new public bike-share system. It isn’t the kind you might be familiar with from New York or Chicago or Denver: There are no bulky docks and no solar-powered payment kiosks, and the bikes look like any regular city bikes.

But that isn’t really what’s different about the system, provided by a company called Zagster. The thing that makes Cleveland’s new bike-share unusual is that it is the first public bike-share in the United States that is not only completely privately funded, but was also initiated by the private sector.

The Cleveland system isn’t big, consisting of only 34 bikes and six stations to start. It’s centered on the Ohio City neighborhood on the West Side, which has seen a surge in residential development, restaurants and retail in recent years, powered by investors who believe there’s a market for downtown living in Cleveland.

Participating businesses in the bike-share venture include real estate developers, a brewery and a financial services firm. They are all betting that the Zagster model, which to date has been deployed mostly on college and corporate campuses, residential developments, and hotels, will attract riders who want a different way to travel around the neighborhood.

“We as young business owners and developers decided that we wanted to make it happen, and we would pay for it out of our own pocket,” Justin Carson, a co-owner of Platform Beer Co., told Cleveland’s Plain Dealer.

For Zagster, which got its start in 2007 working with apartment complexes, Cleveland represents a foray into a different type of market. This is the first system they’ve installed that is open to all users, rather than just employees, residents or guests of a client. “Typically we work with clients like GE, Duke University and Quicken Loans,” says Tim Ericson, co-founder of the company, which is headquartered in Cambridge, Mass.

Instead of requiring its clients to purchase a relatively costly bike-and-dock system, Zagster leases them the bikes, which lock to relatively lightweight racks with regular Kryptonite locks. The keys are stored in a keypad-operated lockbox on the bike that can be opened with a code subscribers get on their phones with the Zagster app. Many corporate clients make the bikes available for free to employees or guests; in Cleveland, they’ll rent for $3 an hour. The overall cost per bike to the client, says Ericson, is about one-fifth what it would be with a more conventional bike-share system.

Ericson says he knows that the Zagster approach wouldn’t work in a high-volume market such as New York or Washington, D.C. For smaller cities, though, he thinks it could be a way to get bike-share on the ground without unrealistic capital outlays. And, he says, with bigger cities pointing the way, more and more people do want bike-share where they live — a huge shift from when he and his co-founder, Jason Meinzer, launched the business. “It’s completely changed from people thinking, ‘You’re crazy’ and that all the bikes were going to be stolen,” says Ericson. “Now people know about Citi Bike in New York and they understand. They are saying, ‘I see how that can work.’”

Cleveland’s Office of Sustainability recently did a study looking at whether a larger bike-share system would be a feasible option for the city. It concluded that there is potential demand for as many as 1,400 bikes at 140 stations.

The business owners who ponied up for the Zagster bikes decided not to wait, and they think that the Zagster network might be able to expand to other neighborhoods in the spring. But for now, bike-share will be confined to a small geographic area, as it has been so far in Detroit, where Zagster has partnered with corporate clients Quicken Loans and GM. The difference here is that anyone with a phone can use it (for those without smartphones, there is an SMS rental option).

It’s a very different model from the large-scale bike-share rollouts seen in Boston, Chicago and other bigger cities. But Ericson thinks that a smaller pilot program like Cleveland’s can grow organically to encompass more neighborhoods and serve a wider group of users. “Bike-share in Cleveland could have not happened at all, and then we wouldn’t be having this discussion,” he says. “Let’s get it out there and start talking about it, and it can evolve.”