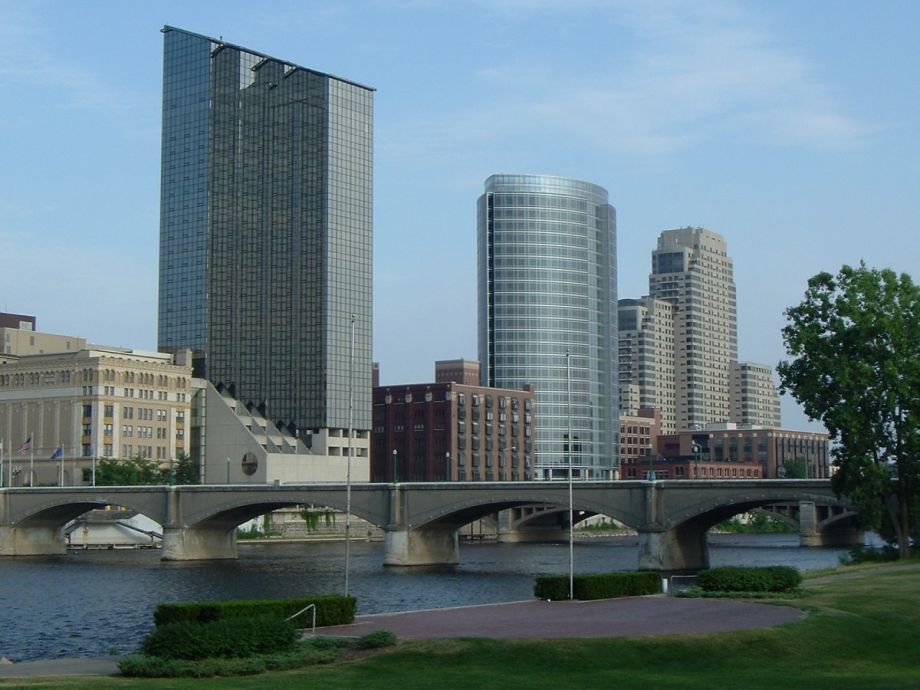 It’s been a big year for the small city of Grand Rapids. First, the transit authority launched Michigan’s only bus rapid transit line in August. Then, on Monday, the city held a dedication for its new $6 million Amtrak station — part of a line that’s so well-traveled, the train’s beleaguered higher-ups tout it on slash-happy Capitol Hill. With new bike lane protections in the works as well, it’s no surprise that the national Center for Transportation Excellence announced it would hold its 2015 transit initiatives conference there, calling the city a “learning laboratory for leaders around the country.”

But actually, it is kind of a surprise. As much larger cities on the progressive coasts struggle to prioritize multi-modal transportation against car-loving codes, infrastructure and voting populations, what is the Midwest city’s secret? What, exactly, is it doing right?

For one thing, the area’s transit authority has a unique structure, according to Grand Rapids mayor George Heartwell. Because suburbs surround the main city, The Rapid is a standalone regional agency. It isn’t housed within any one city’s government.

“We have six municipal governments working side by side, and I think the suburban neighborhoods really get a voice,” he says. Planning a unified system for everyone has been easier under this structure, he adds, whereas too often urban and suburban agencies collide on parochial interests and fears.

This can be seen in the BRT’s history. Voters approved a property tax increase for the new Silver Line in 2011. Unlike countless first-stage light-rail lines so burdened by cost that they barely leave downtown, the Silver Line extends more than nine miles south along U.S. Route 131, into the southern towns of Wyoming and Kentwood. Simple math allows it to serve that long stretch; the Silver Line’s total cost was a little more than $40 million, Heartwell says, while light rail would have cost about $20 million per mile.

At a time when core urbanites fight even with further-out urbanites (not to mention suburbanites) for light-rail lines that appear to serve only a few, the Silver Line shows BRT as a much cheaper, and thus much more inclusive, option.

“We rewrote our whole zoning ordinance,” she says.

Two bold decisions came out of that update to encourage transit-oriented development. First, the planning commission can now waive all parking requirements for new developments that are located next to transit, a definite carrot for developers when parking is an expensive add-on.

Second, officials decided that if a developer was in line with the new plan’s overall goals — “if they are building what the city wants,” Schulz says — the approval process can be wildly accelerated. Instead of going through city and planning commission meetings for approval, that developer only needs administrative permission.

As anyone who’s attended city council and planning commission meetings can tell you, that’s a controversial move. Those two forums tend to be local government’s catchall for debate — a place where harmful projects meet community resistance, but good projects also run aground on NIMBY opposition.

Still, Schulz says community engagement was so high when the master plan was written that the provision hasn’t bothered many.

“We try to always provide a bigger context to the community,” she says.

For example, the city recently began ticketing cars that park in bike lanes.

“But we really try to communicate that bike safety is a value and vision that’s at the core of our city policy,” she says, adding that — like prioritizing transit-oriented development — it serves a long-term goal that residents actually “helped create.”

And Grand Rapids has a long history of transit-oriented activism anyway, Schulz says. When planners drafted the city’s first master plan in the ’20s, Grand Rapids’ streetcar service was among the best in the nation. But a ’60s update set the stage for cars, sprawl and federally subsidized “urban renewal” that favored freeways and demolished part of downtown. Tragically, Schulz says, Grand Rapids’ cathedral-like city hall, designed by famed capitol architect Elijah Myers was also bulldozed. Those past bad decisions set the stage for community engagement, she claims, galvanized by planning that traded city history for parking and sprawl.

A supposed “learning laboratory,” Grand Rapids provides several lessons in multi-modal development. Some will be discussed and broken down by leaders at CTE’s forum next year. But another, says Heartwell, is simple: When planning for transit, be bold.

“People want transit; they’re demanding transit along with great bike facilities and walkways,” he says. “It’s good for a city’s growth. It’s good for air quality. And I think it’s going to be good for the city that makes those investments today.”