Big Data Shows the Way to Healthier Playgrounds for All 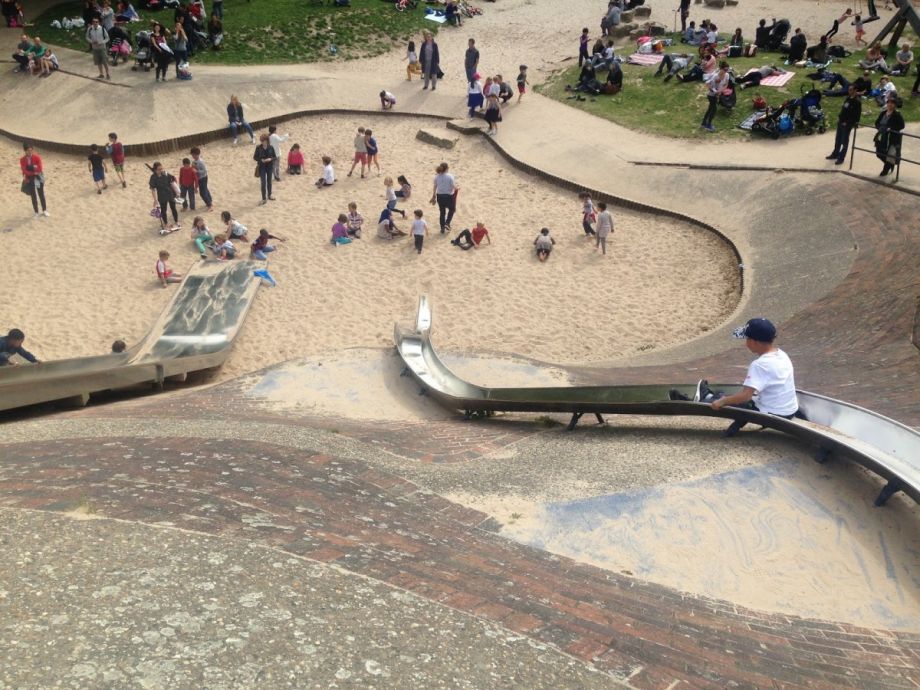 The Pools Playground in the Victoria Park neighborhood of London (Credit: Studio Ludo and Jefferson University)

When was the last time you played? Used the swings at your local playground? Climbed a tree? Kicked a ball? Not organized sports or extracurricular activities, but playing with the imagination and freedom of a 5-year-old.

Play is so important to children’s well being that the United Nations has recognized it as a human right, along with shelter and education. And yet, in the U.S. today, children spend an average of 7 hours per day on screens. Nearly 1 in 3 are overweight or obese. Stress levels in children and teens are at all time highs, and levels of depression and suicide are rapidly increasing. The same can be said for adults, with obesity now a leading cause of death in the U.S. Clearly, we need to move more, we need to get out more, and we need to give ourselves permission to play but where?

Currently, the state of play and playgrounds in the U.S. is limited to colorful jungle gyms on rubber flooring, surrounded by fences; rarely do they attract children past elementary age. Adults spend their playground time primarily sedentary, passively observing, and the rare teen spotted in a playground is likely glued to a phone. Our playgrounds have become homogeneously safe and insidiously boring.

Playgrounds in other countries, particularly in Europe and the UK, have moved beyond this cookie-cutter model. A six-month study (by op-ed co-author Meghan Talarowski) of the play behaviors of almost 15,000 people in these playgrounds found that they had 55 percent more visitors, 14 percent more adults, and kids and teens were 16-18 percent more physically active when compared to playgrounds in the U.S

Clearly, there is something about these playgrounds that gets people of all ages visiting, moving and playing in a way that we aren’t in the U.S. So how do we find out what makes these places tick? How do we discover what would get people outdoors, connecting with others, and improving their long-term physical, mental and social health through play.

Enter the smarterPLAY project. Led by Talarowski and the co-founders of JeffDESIGN, Drs Robert Pugliese and Bon Ku, we have combined our expertise to study play behaviors in parks, playgrounds and public spaces. The end goal: to build better playgrounds that attract people of all ages to be more active and lowering the risk for chronic diseases, such as diabetes and obesity.

Our smarterPLAY researchers spent the summer testing Bluetooth sensors and heat mapping technology in a variety of settings in Philadelphia, from Waterloo Playground in the Norris Square neighborhood to the Whitman Branch of the Free Library in South Philadelphia. We installed antennas to create a localized network, and asked volunteers to wear sensor bracelets to collect data while they were in the space.

Our tests resulted in hundreds of hours of quantitative data about the physical activity and location of users, both indoors and out. The data is anonymous and helps create an accurate picture, down to a few centimeters, of where people go, how much time they spend there, how active they are, and what interactions they have — with equipment, site features or other people.

With this information, our smarterPLAY team can directly link behavior and physical activity to the infrastructural and environmental design of playgrounds. By understanding how people use space and what attracts them, we can build better playgrounds, parks, libraries and public spaces. This is particularly timely in Philadelphia, as the city is about to embark on an unprecedented $500 million investment in public infrastructure known as Rebuild.

As we look ahead to the future of our cities, we must connect the dots between data, health and design in order to ensure smarter playgrounds, happier residents and healthier communities.

Meghan Talarowski is the founder and director of Studio Ludo, a nonprofit dedicated to building better play through research, design and advocacy. She has degrees in architecture and landscape architecture, over a decade of experience in the design field and is a certified playground safety inspector.

Taylor Chiang is a Health Design Researcher at Thomas Jefferson University. She is currently a senior at Swarthmore College majoring in Neuroscience, minoring in Gender and Sexuality Studies, and a pre-medical student.