With Another Light-Rail Fail, What’s in Store for Austin Public Transit? – Next City

With Another Light-Rail Fail, What’s in Store for Austin Public Transit? 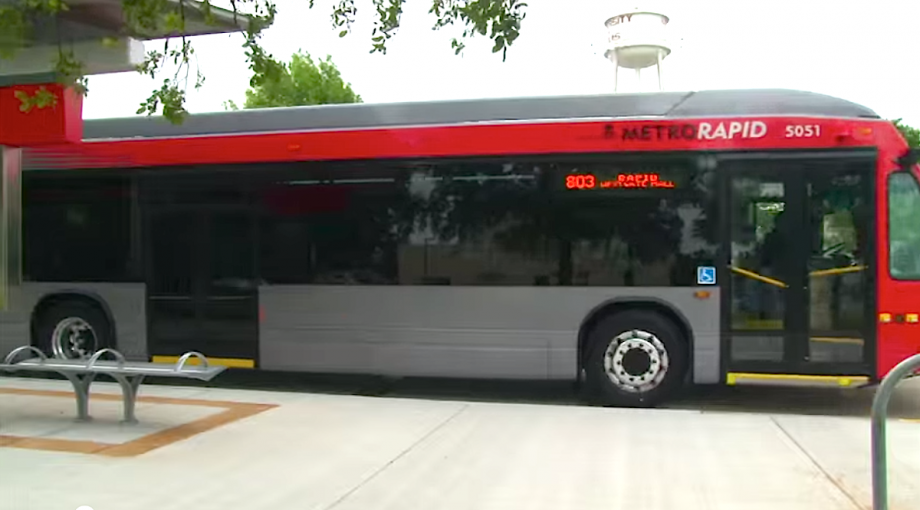 Last week Austin’s light rail proposal failed, marking the city’s second unsuccessful attempt to lay financial groundwork for such a line. But as one of the country’s fastest growing and most congested metro regions, Texas’ capital can’t rely on packed freeways forever. It needs a “Plan B” — and for some that “B” stands for Bus.

As I’ve written before, bus rapid transit tends to be less costly and easier to pass than light rail. In some cities, its immediate success is actually kind of staggering — because BRT is so much cheaper, long, thorough routes can be rolled out all at once (instead of in small installments like light rail) boosting ridership instantly.

It seems no accident then, that a highly publicized “brainstorm session” on the future of Austin’s transportation needs took place last Friday, shortly after the election, aboard an 803 Capital Metro bus. Mike Martinez, one of the city’s mayoral candidates headed to a runoff election, made the Plan B statement.

“Capital Metro [the local transportation agency] and bus service is the single biggest tool we have right now … for giving people the opportunities they need to get out of their vehicles and onto mass transit,” Martinez, also the chair of Capital Metro’s board, told KVUE reporters.

So what would a bus-centric transit plan look like for Austin? As it turns out, the groundwork for BRT is already in place. This year, Capital Metro launched two lines under the name MetroRapid. But both the 801 and 803 have access to a bus-only lane for just part of their routes; neither is the fully integrated, light-rail-like system you’d find in other cities, and ridership on one line actually took a hit initially, likely due to more expensive fares. Still, both have potential, and Austin isn’t becoming any less congested. I asked Capital Metro staff and a handful of transportation wonks how it could improve going forward.

Joseph Kopser, CEO of RideScout, organized the on-bus meeting last week. He wanted to hold a solutions-oriented get-together, he says, because Austinites are already talking about transit issues in the wake of Prop 1, and will continue to think about them through the mayoral runoff election.

After that meeting, Kopser says he doesn’t see bus as the only solution for Austin’s transit needs, but several things could be done quickly to better the existing rapid lines including upping their frequency and extending them in every direction.

Local advocates on both sides of the Prop 1 divide were also happy to weigh in. Notably — even though transit activists were deeply divided on the proposed light-rail line — many of their points are the same, bolstering hope for unified support on a robust bus system.

Kevin Miller, a member of advocacy group Aura supports light rail but did not support Prop 1. He calls the new buses “a half-measure.”

“At a minimum, Capital Metro should secure funding so that the MetroRapid buses don’t carry a “premium” fare that reduces ridership,” he writes in an email. “They also need to be a true BRT, with additional dedicated lanes.”

Brendan Wittstruck, an advocate who voted yes on Prop 1, says that ideally, he wouldn’t consider BRT a replacement for rail. However, with so much infrastructure already in place, he sees a lot of potential in the MetroRapid routes.

“Rail can move people in ways that BRT can’t,” he says. “But I would never fight a BRT project because I was holding out for rail.”

He also worries about the more expensive fares — and the message they send. “In the South and Midwest, the perception is very much that public transportation is for poor people,” he says.

Citing the 801 and 803’s advertised Wi-Fi, “premium service” and higher rates, he believes that officials are intentionally trying to reverse this image, which could create a kind of on-board gentrification.

Todd Hemingson, a planning and development official with Capital Metro, defends the fare increase. Staff, seeing that ridership wasn’t what they’d hoped at first, did consider lowering it, he says, but now the numbers are steadily going up.

“We needed to ride it out,” he says, stating that due to the lines’ amenities and more frequent run time, they simply cost more to operate.

Eventually, the agency “has ambitions” for more bus-only lanes, Hemingson says. For every expansion, however, it needs the approval of local government.

“We’ve fought long and hard for the lanes we have,” he says.

But though BRT expansions rely on a public process, they’re so much cheaper than rail expansions that agencies generally don’t need to pass a tax-raising bond proposition. In other words, compared to the two failed light rail propositions, expanding the bus system could be — if not easy — at least easier.

And the light rail’s proposed route along Riverside Drive “has been identified in our planning as having great BRT potential,” Hemingson says. “When the city took the lead on urban rail it didn’t make sense for the two to compete, but now that it hasn’t passed, we’ll have to see what will happen next.”

“Incidentally, the Prop 1 corridor — especially the southeast section along Riverside Drive — would be an ideal location for a “true” BRT line at a fraction of the cost of the defeated rail proposal,” he writes.

Could “true BRT” become Austin’s Plan B? Other cities are doing it well; with rail’s failure, these buses could be just the unifier Texas’ politically divided capital needs.