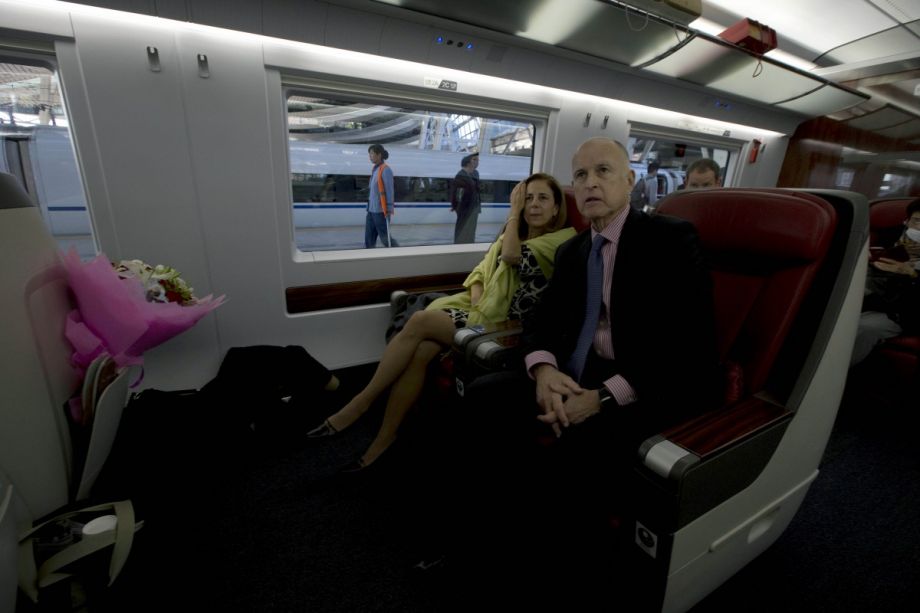 A reelected Calif. Gov. Jerry Brown, shown with wife Anne on a high-speed train in Beijing, can keep pushing his HSR vision in the Golden State. (AP Photo/Ng Han Guan)

From Republican leadership in the Senate Committee on Environment and Public Works to mayoral races in Austin and Washington, D.C., here are key 2014 election results that will shape the future of water, transportation and energy infrastructure.

Texas Fuels Highways
A win for the Texas-wide Prop 1 isn’t surprising; Texans have major highway woes, and the state’s gas tax hasn’t been raised in over 20 years. The measure will move funds from the state’s rainy day fund to its emptying state highway fund, with money coming from Texas’ substantial oil and gas industry.

Road and Rail Bundling Fails in Austin
Austin’s road-and-rail proposal (also called Prop 1) split the city into many factions — and it failed. Officials hoped to bridge the gap between road and rail advocates by bundling $400 million in road improvements with $600 million for a light-rail line. (A rail-only measure failed by a less than a percent in 2000.) But the move ended up polarizing some pro-rail groups, while others were already upset about the proposed tracks’ location.

Atlanta ‘Burbs Embrace MARTA
Clayton County, south of Atlanta, passed a one-percent sales tax bump that will extend MARTA service for the first time years. The victory stands out because Atlanta’s suburbs have long rejected MARTA, with race and class issues at play. This is the first suburb outside the train’s two-county core to join, a move that will bring bus service and even extend the train once funds are saved. It’s a big win for equity and regional unity; hopefully the Atlanta Metro’s northern counties will take note.

Oakland’s County Ups Transportation Sales Tax for Rail, Bike Lanes
Oakland’s home county of Alameda passed Measure BB to double transportation sales tax, giving it one of the highest in California. Its $7.8 billion over the next 30 years will fund a broad package including freeway and road improvements, public transit, bike lanes and $400 million toward a BART route to the eastern city of Livermore.

Runoff for Austin Will Still Include Beating Back the Car
Austin’s mayoral race was shaped partially by the contentious and highly publicized Prop 1. Now, a runoff election will take place between Steven Adler and City Council Member Mike Martinez, both of whom voiced support for the failed measure. Martinez, chair of the Capital Metro Board of Directors, spoke unswervingly in favor of multi-modal transportation, including bus rapid transit, while Adler praised land-use changes to ward off congestion. Prop 1 may have failed, but both candidates seem committed to reducing car-centric infrastructure in Austin.

Streetcars Aside, New D.C. Mayor Is Good for Transit
Democratic Council Member Muriel Bowser took the mayoral seat from incumbent Vincent Gray. As mayor, Gray championed the city’s controversial streetcar, while Bowser argued to cut its budget. But streetcar battles aside, the new mayor is no foe of transit-oriented development. Through prioritizing affordable housing and equitable land-use policies her administration will fight sprawl-inducing gentrification, and she’s spoken in favor of bus lanes, Vision Zero and dedicated bike lanes.

Will San Jose Fight Sprawl?
The so-called Capital of Silicon Valley still appears locked in a tight mayoral race; councilmember Sam Liccardo had a slight lead over County Supervisor Dave Cortese this morning. With historic sprawl and massive regional growth facing the area, Liccardo’s smart growth history is bolder than Cortese’s, which will hopefully guide the city away from its self-feeding cycle of car dependence.

Can Jerry Brown Build California High-Speed Rail?
Surprising no one, Jerry Brown won a fourth term in California. Brown made water infrastructure a key platform, but he’ll also continue to push his legacy-maker: high-speed rail. The massive project will not be done in Brown’s next term, but, as a writer for the San Jose Mercury News recently stated, his task is now “to see that enough of the line is completed to make it impossible to abandon.”

On infrastructure matters, this race was downright bizarre; Crist criticized Scott for turning down federal funds to build high-speed rail while Scott defended a private high-speed rail project that looks like it might actually be built. But while Scott’s victory could be good for one “private works” project, Crist championed energy alternatives that the climate-denying governor likely won’t embrace — a major loss in a state that faces rising sea levels and violent storms.

Bad News for Wind Power in Kansas?
Kansas stayed bright red to re-elect Republican Sam Brownback over Democratic challenger Paul Davis. This could be bad news for wind energy; Davis was a staunch supporter of Kansas’ Renewable Portfolio Standard, which mandates a percentage of clean energy. Brownback’s support of the RPS and wind energy is more complex, mirroring Kansas itself. Wichita is home to Koch Industries, and one of the energy moguls’ many advocacy groups has led the charge against statewide clean-energy regulations. But Kansans show overwhelming favor for wind energy. Riding Koch-based funding, Brownback has a lot to lose by supporting wind energy, even as it starts to fuel his voting base.

Yes, Republicans took the Senate. On the clean-and-equitable infrastructure front, this news is what Veep’s Selina Meyer claimed she would title her memoir: “Not great admittedly.” As the New Republic was quick to point out, a high-profile climate-denier (James Inhofe) is next in line to chair the Environment and Public Works Committee, taking over from Democratic Senator Barbara Boxer. Inhofe held the position under George W. Bush, when he infamously said that “global warming can be beneficial to mankind.” Bills in the works address everything from transportation policy to stormwater management, and Inhofe’s influence will no doubt be felt. Based on past statements, he will go after Obama’s new coal regulations, champion the Keystone Pipeline and try to limit EPA regulations on clean water.