Amazon Bid May Clear the Way for Indianapolis Light Rail 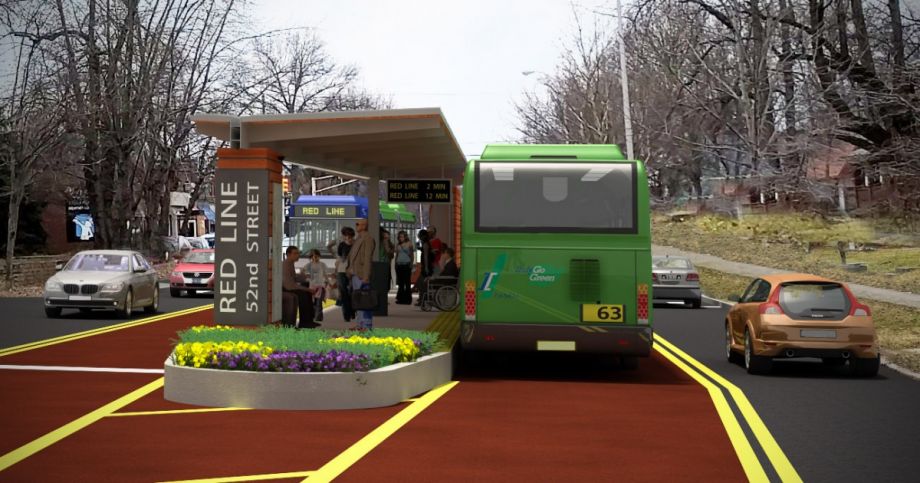 Indiana forbade Indianapolis from spending public money on light rail, so the city moved forward with developing a bus rapid transit system (as depicted in this rendering of the forthcoming project). Now, the lure of Amazon potentially locating HQ2 in the state's capital has some lawmakers reconsidering that decision. (Photo: IndyGo)

The Amazon HQ2 pageant is down to 20 finalist cities in the U.S. and Canada. Whichever one wins will gain a massive employer, but surely lose millions of dollars in lowered taxes, waived fees and other incentives. Much of the bidding process has been shrouded in secrecy, but uncovered and leaked bids have shown that the process is as much about what a city is willing to give up to attract Amazon as it is about the assets they already have. Finalist Indianapolis has no doubt offered deep financial incentives as well (though its bid is also secret, so it’s tough to say), but even if the city doesn’t win HQ2 it may get a consolation prize in the form of light rail.

Inspired in part by Amazon’s interest and the possibility of attracting other large companies, the Indiana state legislature is considering overturning its ban on light rail construction in Indianapolis. One of Amazon’s requirements of the HQ2 city is “access to mass transit routes,” but the state legislature prohibited rail in 2014 as Indianapolis sought taxing authority to build out its transit system. On Tuesday, the House passed a bill that would simply undo the ban and clear a path for future light rail.

“This bill doesn’t say that Indianapolis will build rail, it just gives them the option,” bill sponsor Rep. Justin Moed said at a Jan. 24 House Transportation Committee meeting. “As our state grows and as our city grows, we need to make sure that the tools are all in the toolbox for city leaders, community leaders, business leaders to implement a plan that meets the needs of existing residents, future residents and companies that are looking to come here.”

Indianapolis began pushing for a mass transit expansion nearly a decade ago. City leaders’ vision was to build out both bus rapid transit and light rail corridors, as well as increase the density and frequency of the existing bus network. To pay for the system, the city needed to ask the state legislature for permission to tax itself. After several failed attempts, the legislature finally relented in 2014, granting permission to run a ballot referendum in the Indianapolis region to dedicate a .25 percent sales tax increase to transit funding. But, the permission came with several compromises, including the ban on spending public money on light rail in Indiana.

Transit proponents forged ahead with the rest of their plan. In November 2016, voters approved the ballot measure. In January 2017, the Indianapolis city council gave the plan its final green light. Three new bus rapid transit lines make up the backbone of the system. The $54 million a year in income tax revenue will also fund an expansion of existing bus lines and increased frequency—the 70 percent increase in bus service hours will bring bus headways down to 10-15 minutes for the majority of the system. The money will also help pay for new sidewalk and bus shelters. Construction of the first 13-mile bus rapid transit line is slated to begin later this year.

“I happen to be in the camp that thinks the legislature should not be worrying about the technology itself. It was an overreach to dictate what money could and could not be used for. So I think absolutely the opportunity to repeal that legislation is important for us long term and it think [the Amazon bid] is as good a reason as any to move on that now,” says Kim Irwin, an advocate with the Indiana Citizens’ Alliance for Transit.

Even if the legislation passes, Irwin says it’s unlikely Indianapolis would change course now and introduce light rail into its plan. But, she’s excited about having the option to build it should they decide light rail best suits the region’s transit needs. “It helps us think long term about how we would transition or upgrade the BRT system to light rail over time. But that would be decades away.”

Bus rapid transit alone will be transformative, to Irwin’s mind. “There’s been such a mismatch between where people live and where jobs are and the ability to get to those jobs on transit. … This gives people another option for how they can get around in a quicker, more efficient, more reliable way than we’ve ever had before in terms of transit service.”

Rep. Moed’s bill passed the state house with a huge bipartisan majority, 90 to 5. One of those few dissenting votes was Republican Indianapolis Rep. Mike Speedy. Explaining his decision before Tuesday’s vote, he said, “This provision still represents the potential for billions of dollars in debt to be paid off over 30 years at a time when technology is changing and consumer interests are changing. … It takes a risk of financial boondoggles.”

The bill now heads to the state Senate for consideration.