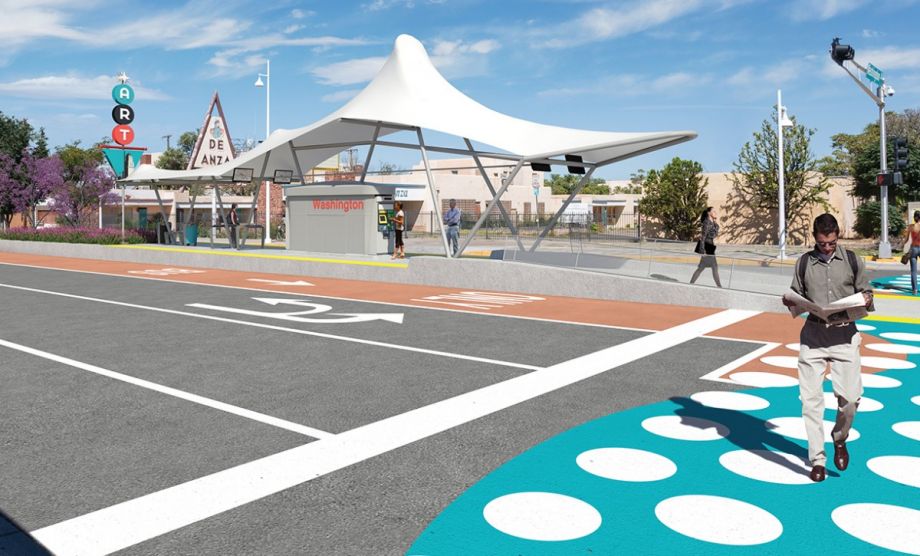 A rendering of an ART station (Credit: ABQ Ride)

Just a month before construction is to begin on Albuquerque’s 9-mile-long bus rapid transit line, opponents of the project have filed a lawsuit to put a stop to the system.

It already took years of debate for Albuquerque Rapid Transit (ART) to be approved. The line will run in dedicated lanes through the largest urban stretch of historic Route 66, and is mostly funded by U.S. DOT. According to the Albuquerque Journal, a group who says ART will not improve bus service at all — and may even make traffic worse — is asking a federal judge to order a halt to the project.

The opponents commissioned a 31-page report by Gregory Rowangould, a University of New Mexico professor, as part of their case. After reviewing traffic studies done for the city two years ago, Rowangould says the “project as currently designed appears to do more harm than good.”

The $119 million project is a priority of Mayor Richard Berry who says it’s a cost-effective way to improve mass-transit service along Central Avenue, much cheaper than a light-rail system, and will make the area more attractive for development. The city also says the studies Rowangould used are outdated, and don’t include traffic improvements that are now included in the project design.

Opponents argue that removing a lane used by general traffic for the dedicated ART lanes will increase congestion. The extra traffic could harm the regular “66” bus service that runs up and down Central Avenue, since those buses will continue to use regular lanes of traffic.

Rowangould also says since ART won’t entirely avoid the traffic either — at two points in the route, ART vehicles don’t have a dedicated lane and will operate amid regular traffic — the ART buses may only match the on-time performance of the “Rapid Ride” buses already in place, or even do worse.

But by city estimates, the ART buses will arrive at stops every 7 to 8 minutes, about half the time it takes Rapid Ride to arrive. The dedicated lanes will help ART buses reach intersections faster than they would otherwise, the city says, and at the two points where they enter traffic, the buses will communicate with traffic signals to get priority when they arrive. Smaller “66” busses will also be able to use ART lanes when necessary to keep up on-time arrivals.

The Albuquerque Business Journal reported that the New Mexico Restaurant Association is backing the lawsuit.

“Road construction is notorious for its negative impact on restaurants. When construction happens on a major thoroughfare, sales plummet, employees leave for busier restaurants and customers avoid the area to find different easier-to-get-to restaurants,” the association said in a statement.

The association said 148 restaurants will be affected by the construction on Central Avenue, and that restaurants are also concerned about an increase in congestion, losing parking spaces, left-hand turn lanes, center mediums and trees. (In the last few years, at least two cities, Montreal and St. Paul, have gotten creative to help businesses facing torn-up streets and backhoes.)

Construction on ART is slated to begin Aug. 1, assuming the city gets necessary federal approvals to start work.