Montreal Business Corridor Has a Plan for Surviving Torn-Up Streets 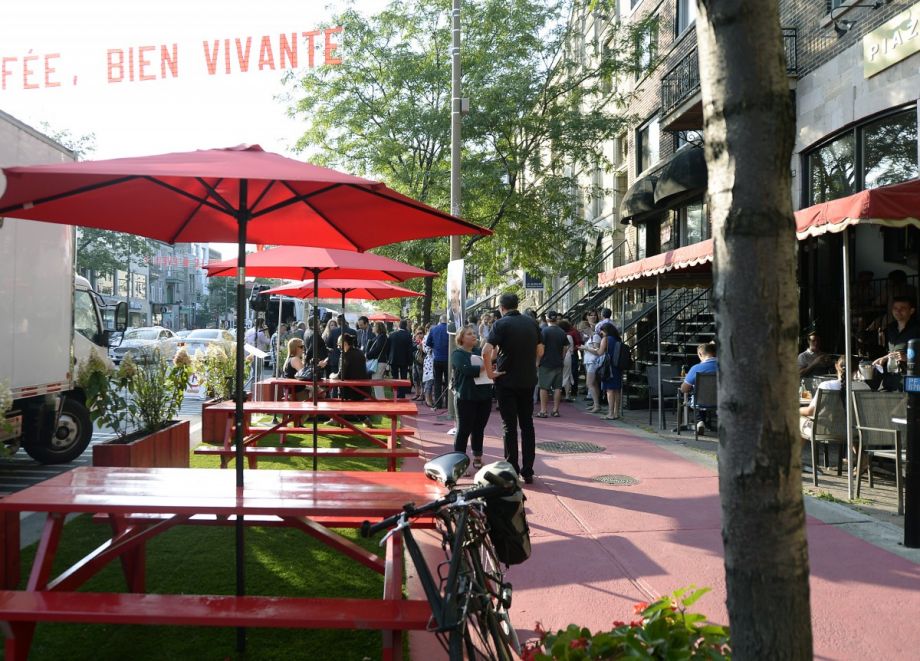 The assessment is of a bench, newly installed, in the shape of letter spelling out the name of the street on which he stands. Rue Saint-Denis, a major avenue through Montreal, has become the setting of an experiment in how to help a business corridor survive major construction projects.

Construction has caused more disruption than usual in the last few years in Montreal, where long-delayed work on aging infrastructure has piled up. As cities in the U.S. and around the world begin to tackle such widespread deferred maintenance, tearing up streets and sidewalks will be a strain on entrepreneurs who rely on foot traffic. Many municipalities are finding relief in the creative. Last year, in St. Paul, Minnesota, artists worked with business owners affected by a light-rail project. Everything from murals to live music shows telegraphed to customers that stores and restaurants were open amid the chaos.

The year of roadwork planned for Saint-Denis won’t begin until February or March. However, in preparation, Beaudoin designed something that takes “Park(ing) Day” to a new level: Red pallets, installed last month, take up the right-most lane of traffic for an entire kilometer (six-tenths of a mile), making up a “grande terrasse,” aka the red boardwalk.

“The idea is to make an evolving public space,” Beaudoin says, with a before, during and after.

In the pre-construction period, Beaudoin wants to attract more people to spend time on the street. He says that, in total, the boardwalk has 1,000 “stopping areas” (three people to a bench, one to a folding chair, hammocks, et cetera). Festive, lettered banners hang across the road, the same type of construction used to suspend signs behind a plane. (Beaudoin actually ended up hiring the operator of a plane he spotted overhead to create them.)

“You don’t want to invite people to your house when it’s messy,” says Olivier Gougeon. Gougeon works for a publisher of French language travel guides called Ulysses, which has its headquarters and a bookshop on Saint-Denis. He helps run the local business association.

By raising the visibility of the corridor before construction, he hopes more visitors will stick with the merchants through next year. “The new term is ‘retail-tainment.’”

During construction, pallets will be rearranged into platforms at either side of the roadwork with a view over the work site, and art installations will brighten up the barriers. In the final post-construction phase in 2017, the boardwalk will return to the restored street.

Stores on Saint-Denis, as everywhere, were losing sales to online shopping long before the announced plans to tear up half a kilometer for two years. The young business association for the corridor leapt into action. First they convinced the city to coordinate construction among different agencies; that got the original length of time down to a year. They also secured $2 million from the city to mitigate the losses to stores and restaurants.

During construction, there will also be a permanent liaison so that merchants have someone to call when they arrive one morning to find that, say, access to their business has been blocked.

Coordination is a big concern for organizers of the boardwalk. Not long after checking in on the new bench, Beaudoin spots the spray-painted symbols on the sidewalk indicating plans for excavations. The architect snaps a photo with his phone to follow up.

Some business owners have said they would rather receive a check for a percentage of that $2 million dollars, but others are supportive.

David Tran, owner and chef at Bao Boys, a trendy new Vietnamese restaurant, says busy weekends have made for more business. Events are planned on the boardwalk Thursday to Sunday. In early September, the street was turned into an “apple orchard.” Stores offered bowls of free apples, and amateurs struggled to get a series of vintage barrel cider presses operational.

Whatever lessons are learned along Rue Saint-Denis, the city of Montreal would like to apply them at other sites. A design contest will solicit plans for managing the renovation of another major avenue downtown. Work on Sainte Catherine, a popular commercial boulevard, could begin in 2017, with segments staggered over five years.

“It’s not thought of, the horrible economic impact,” Marie-Josée Lacroix of the city’s Bureau of Design says of the status quo. She and her colleagues are watching work on Saint-Denis closely.

Lacroix calls these spaces “labs for designers,” but it’s very difficult to scientifically assess what the overall impact has been on the business corridor. Gougeon says merchants have not wanted to share their sales numbers. The one tool the business association plans to use is to compare pedestrian counts taken last year with numbers gathered on an upcoming weekend to quantify how much activity has grown.

“Is it going to help business?” Gougeon poses the question himself. He thinks the answer is yes. “Enough? It’s too early to say.”