A Love Letter to the Long Island Rail Road – Next City

A Love Letter to the Long Island Rail Road 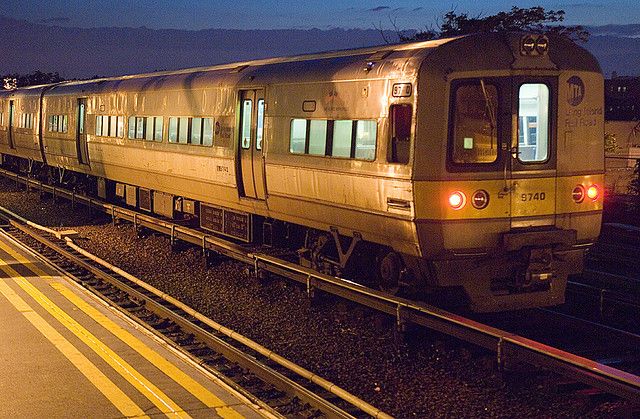 These days, for me at least, riding the Long Island Rail Road is a bit like having desirable but totally unfulfilling ex sex.

You see, the LIRR took my transit virginity. It was not only the first train I ever rode, but also the first public transportation service I ever interacted with, or even knew about. And, much like how a small part of me will always love my first girlfriend, I will always remember what it was like to feel the caress of the LIRR’s rubber seats, to rock against its windows as it carried me through the tunnel beneath the East River, to feel the emotional uncertainty of when the lights flickered on its old M3-series trains.

For those out there who didn’t grow up on Long Island, it may be hard to grasp just what the LIRR meant to a kid like me. Though the city — for myself, my family and everyone else in the region, “the city” could only and ever mean New York — had always captured my imagination, the seeds of my urbanist future weren’t really planted until my mid-teens, when even the walkabile inner-ring suburb where I grew up started to seem a little… staid.

That’s putting it lightly. I’ve since taken a more generous view of the suburbs a la Roger Keil, but at the time my frustration with the form, culture and sociopolitics of Long Island hit me with an intense, inarticulate passion, the likes of which I had never felt before. It didn’t matter that we had sidewalks and locally owned delis, bagel stores and pizzerias. We also had some of the worst segregation in the country, ubiquitous conservative Catholicism and an abundance of unnecessary SUVs. Yours truly could only focus, perhaps naively, on the bad.

My outlet, my escape, was to travel to the city whenever possible. And the unromantic carriage that would take me there? It was the LIRR, every time. Even the car-dependent parents of Nassau County know better than to drive to the city, and my mother had no qualms about sending me off on the train to a concert or a Knicks game.

I came to rely on the railroad. I needed it. And like in any relationship where one person always has the upper hand, it wasn’t always there for me. I had transferred out of the local public school system to attend high school in Manhattan’s Chelsea neighborhood. That meant taking the LIRR, both ways, each weekday for about nine months a year at least. (This, in addition to a quick daily subway ride). It also meant that I could develop a commuter’s perspective on things, when previously I had only been a weekend rider.

A typical ride from my hometown’s stop to Penn Station took nearly 40 minutes. This could stretch, however, to a grueling two hours or more. Delays were frequent, and I spent many a rush hour afternoon crammed onto a platform in the overheated bowels of Penn, waiting for a train that should have already arrived. Worse than that, I spent many predawn mornings on an exposed elevated platform in the cold, killing time at a two-track stop on the Babylon line whose only waiting room smelled perpetually of piss.

What hurts more than not showing up when we’re feeling helpless, though, is a partner’s inability to communicate. The LIRR was about as aloof a partner as one could ask for. Hour-long delays were excused with nothing more detailed than “signal problems.” I would wind up stranded at Penn with thousands of other commuters and had nothing to blame other than a mysterious “track fire.”

There seemed to be a suspicious amount of these invisible fires.

As a teenager, I would curse the LIRR under my breath and pray that its ugly elevated tracks would come tumbling down. I would call it a liar when, upon seeing a performance review brochure left on every seat one morning, I realized that the railroad didn’t count delays under five minutes while touting its share of on-time service. Four minutes and 59 seconds of my time spent in the frigid winter morning didn’t seem to matter.

Still, I depended on it. And that dependence, though I was loath to admit it, grew into affection. Because of the railroad, I got to know Washington Square Park and MacDougal Street and Café Reggio. I got to spend Friday nights loitering with friends in Union Square or catching concerts at Webster Hall and the Village Vanguard. I got to sneak into Midtown pool halls and gawk at since-closed sex shops and browse Alabaster Bookshop and listen to homeless men on 14th Street tell their stories.

The Long Island Rail Road made all of that possible. I still think about the huge chunk of my life that I’ve spent being carried east and west from South Shore suburbia to Penn Station and back again, and I am grateful.

Despite having traveled countless times on the New York City subway, Washington, D.C.’s Metro, and Philadelphia’s various trains, buses and trolleys, I can say with certainty that I’ve spent more time on, and shared more formative experiences with, the LIRR. It was my first transit love. For all of its flaws, that counts for something.