PORT’s Christopher Marcinkoski is creating projects like Carbon T.A.P. — a proposed system of transportation tunnels that provide both municipal green space and on-site carbon harvesting — and pushing the boundaries of what design can achieve in the urban landscape.

A rendering of the Carbon TAP project. Christopher Marcinkoski

Don’t let Christopher Marcinkoski’s boyish features deceive you. Almost a decade out of architecture school, his big ideas about urban infrastructure and nature’s place in the built environment are redefining the role of the designer in the 21st century. After six years of honing his skills at Field Operations (of the High Line fame), Marcinkoski is now promoting those big ideas in his own design and research firm, PORT.

With co-director Andrew Moddrell, Marcinkoski is creating projects that have distinguished PORT as one of the most innovate young design firms in the field. Projects like Carbon T.A.P. — a proposed system of transportation tunnels that provide both municipal green space and on-site carbon harvesting — are pushing the boundaries of what design can achieve in the urban landscape.

Marcinkoski recently took time from his new post as Assistant Professor of Landscape Architecture at PennDesign to talk the end of infrastructure, the future of design and his take on urbanism. Below are excerpts of the conversation.

Johanna Hoffman: The subscript to the PORT logo is ‘architecture and urbanism.’ As urbanism is a term that gets thrown around a lot these days, what’s your definition of the word?

Anthropogenic occupancy. It’s architecture and urbanism because both Andy and I are both formally trained as Architects — we met at Yale — and we tread in the built environment. But the idea is that any natural system, any landscape or territory, that’s modified by humans is something we consider urban. There’s not this ‘if it’s dense it’s urban, and if it’s not dense then it’s suburban,’ with us. Our approach is, if there are people in a place and they’ve impacted that landscape, then the site is an urban condition where we’re interested in operating. So urbanism isn’t just about the city. We’re interested in the city, we like to do work in the city, but for us urbanism has a much broader definition.

This is a bit of philosophical question but given your answer I think it’s a necessary one. What does nature mean to you?

In the designation I was making just now, a natural system is any ecological condition that has emerged without, or has preceded, human intervention. That means rivers, valleys, moraines, deserts, lakes, plateaus. They’re things that we consider natural features and that tend to drive how the patterns of urbanization occur. Urbanization tends to locate itself on those natural systems and then leverage them.

For us, what’s interesting is when those natural systems get modified and how we can begin to correct and then re-orient those modifications. When we work in a river valley, it’s not so much about the watershed as it is about defining a territory to operate within, and dealing with all the conditions that fall within that territory. 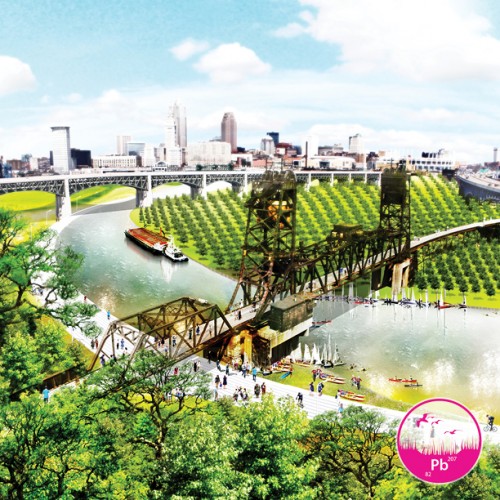 How do you feel like new technologies are changing the process of design? How do you plan on navigating those kinds of technological changes, if at all?

I think at the root of it, all of those technologies are no different than a pencil and a piece of trace. They’re just tools. And the minute you get caught up in the idea them being the project, you get in trouble. For us, we use all of those tings, depending on the appropriateness of the project. But at the end of the day, you have to be able to convey an idea.

In our case, because of the scale of the work we do, the people we convey those ideas to tend to be politicians, developers, council members, community groups — people with a fair amount of power and not a lot of time, who need to know what the deal is as quickly as possible. So for us, the measure of success is clarity.

What do you think the role of the designer is in bridging human and natural systems?

First of all, in any of the work that we do, there are many different actors. So I think the designer has a certain responsibility to guide the way those different actors play their roles. In that way, we become a point of transition. We’re the ones who are able to take an environmental scientist and their concerns, and talk about them spatially so that a mayor can understand what the physical consequences of those environmental concerns will be on their city.

A second role, which is emerging, is to be an advocate. Andy and I believe that in order for the design professions to evolve and remain relevant, they have to become more vocal and take on more of a leadership role. We want to be at the table defining not just the solution, but the challenge or the opportunity of the project as well. Some people call that activism and some people call that entrepreneurial – it depends on where you fall in the Marxist capitalist continuum. For us, it’s about defining places to work.

Continuing on that train of thought, how did you conceptualize the Carbon T.A.P. project?

That project was a search to say “We’re not going to pass value judgment one way or another on things.” We know that the transportation situation needs to be modified but we also know that you can’t immediately take cars off the road, or stop using carbon based fuel. So given that, what’s the interim stage? How can we take something that’s considered negative (the carbon), a byproduct that we see as harmful, and leverage it into something else, like a commodity? Since those carbon point sources occurred in urban contexts, it allowed us to begin to speculate on new typologies that could occur from modifying those systems.

We have a little bit of an ‘It is, so let’s deal with it,’ attitude. We know that transformation takes a long time and has a large cost to it. And while it’s not that we don’t advocate for positive transformation, the reality is that we have situations now that we have to deal with.

What I thought was really great about the Carbon TAP project was, even if we do replace all gas powered cars with hydrogen powered transport or whatever, we still end up with a physical product that’s fantastic spatially and becomes an amenity for the city. So, even when the technology isn’t necessary anymore, the result of the project is still valuable.