Rahm Emanuel’s proposal to put $7.2 billion toward transit improvements in Chicago stands in stark contrast to the dithering over transportation legislation in Congress. It’s a move that most other cities would likely emulate with few negative political results.

The Bloomingdale Trail in Chicago, to be completed with funds pledged by Mayor Emanuel. Flickr user vespar avenue

Though the details are not yet in full view, Chicago Mayor Rahm Emanuel’s proposal to spend $7.2 billion over the next three years on infrastructure upgrades represents a truly significant advance in the field of municipal investment in the United States. It’s a unified plan to spend public and private funds on improved transit, parks, water and educational facilities.

What a contrast to the U.S. Congress, an allusion to which I can hardly overlook in this context. Last week, House and Senate officials pushed forward an extension of the existing surface transportation legislation—the ninth such extension since SAFETEA-LU, the previous law, originally was supposed to expire in 2009.

The problem, suffice it to say, is not cowardice or nonsense political wheeling-dealing, but rather relatively minor—but painfully partisan—differences in perspective on the national transportation system. Over in the House, Republicans have campaigned for no increase in spending on mobility infrastructure (under the guise of fiscal moderation, with the goal of remaining within the constraints imposed by revenues provided by the Highway Trust Fund). Transit and other alternative mobility programs have been put under threat. In the Senate, Democrats promoted (and passed) a small increase in overall funding through a diversion of money from general (non-gas tax) revenues.

Now Congress has given itself an extra 90 days to pick up the slack and somehow pull together a bipartisan transportation bill in the middle of campaign season in a presidential election year. The task is practically herculean.

In that sense, comparing Emanuel’s progress with the non-action out of Washington is unfair—Chicago’s strong mayoralty, which has almost direct control over public transportation, education and the parks, allows swifter, more direct action than is possible in the heavily contested national legislature. And perhaps unlike in the federal government, there is basically universal support at the local level for the idea that the public infrastructure must be improved upon.

Emanuel’s plan, dubbed “Building a New Chicago,” would guarantee investments in significant upgrades across the city. Some of the announcement is a media device—much of the spending would have occurred, announcement or not—but much of it is being financed through “reforms, efficiencies, cuts in central offices, direct user fees, and… the Chicago Infrastructure Trust,” according to the mayor’s office. This is not, in other words, the same-old, same-old.

The city must be able to show that it can save significantly by improving the delivery of its existing services. One example, for instance, is in the creation of bus rapid transit services on Jeffrey Boulevard and in the Loop, both of which are part of the plan, and each of which would improve the daily experience of transit users even as they reduce operations costs for the Chicago Transit Authority. Similar improvements, such as a $225 million retrofit program, would save money in the long term by reducing energy consumption.

Other projects, such as the completion of the Bloomingdale Trail (the Chicago equivalent of New York’s High Line), the upgrading of many of the city’s parks, the update of the water system, the improvement of many schools and the renovation of 100 El rapid transit stations would be funded as well. Though the exact method by which they would be financed has not yet been established, it seems evident that some mix of user fees and private spending will be on hand. The latter will be made possible through the Infrastructure Trust, which Emanuel announced a month ago. The Trust would use debt and equity investment to leverage private investment for infrastructure. It could be an innovative mechanism to speed repairs to the city’s public environment. 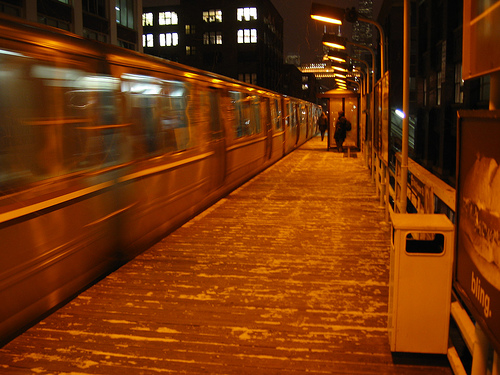 A stop on the Chicago El. Credit: Chris Karr on Flickr

Unlike his predecessor Richard Daley, Emanuel has produced a plan that would not result in the privatization of infrastructure. Daley’s 2008 parking meter deal notoriously lost the city billions of dollars, even as it deprived the city of control over much of its street space. The Trust would allow for private profit-making without handing over full control—a reasonable compromise.

Emanuel’s interest in investing in infrastructure is a logical extension of the arguments he has made since he was sworn in to office about 11 months ago. His administration, like that of most other cities, has been troubled by the decline in tax revenues resulting from the nation’s extended economic difficulty. He has had to balance budgets through difficult moves like school closings.

Yet unlike leaders of other cities, Emanuel has not yet made the push for increases in taxes to pay for infrastructure, unlike, say, Los Angeles. In some ways, this represents a strategic move; rather than assume that voters are ready to contribute more to a less-than-perfect system, there has been an effort here to live within the city’s existing means. If this can be done without imposing too much austerity on public services, it will raise confidence in the local government’s ability to perform adequately.

Chicago’s decision to fund its projects in such a manner is something that most cities could likely emulate with few negative political results. They just have to be more willing to experiment with creative financing and efficiencies.

In the years ahead, though, even a $7.2 billion investment will be inadequate to resolve some of the city’s most significant transportation needs, such as the renovation of northern section of the Red and Purple Lines and the extension of the Red Line south to 130th Street (each of which Emanuel has announced his intention to pursue)—not to mention more long-term efforts to extend the Orange Line, build a new downtown subway tunnel and create a citywide BRT network. If those projects are ever going to make it into construction, Washington will need to step up its game, as even cities like Chicago need federal support for the biggest investments.