Despite their different backgrounds, the three creators of Philadelphia’s new Recycled Artist-in-Residency (RAIR) program have one common trait: where others see trash, they see art. RAIR is another example in a growing list of ways that art is being used to address and ameliorate civic problems.

Despite their different backgrounds, the three creators of Philadelphia’s new Recycled Artist-in-Residency (RAIR) program have one common trait: where others see trash, they see art. RAIR, a project that provides local artists with salvaged materials, tools and workspace to create works of art from waste, is their way of spreading that vision. Founded by industrial designer Fern Gookin, business owner Avi Golen, and sculptor Billy Dufala in 2010 and run out of Golen’s Tacony-based recycling center, Revolution Recovery, RAIR is another example in a growing list of ways that art is being used to address and ameliorate civic problems.

It’s a project that was itching to be born. “We had all been thinking of (the concept) independently for a while,” says Gookin, who initially conceived of RAIR as her thesis project while a grad student at Philadelphia University. Professors connected her to Golen, who had been informally connecting artists with recycled materials through Revolution Recovery for years.

Dufala was one of those artists. A large-scale sculptor, he has long been frustrated with the general lack of accessibility in Philadelphia’s recycled materials industry. “No one will really let you in,” he explains. “Those companies aren’t in the business of art.” Revolutionary Recovery, which processes over 200 tons of construction materials per day, was a rare exception, but lacked the time and funding to facilitate a more formalized program. 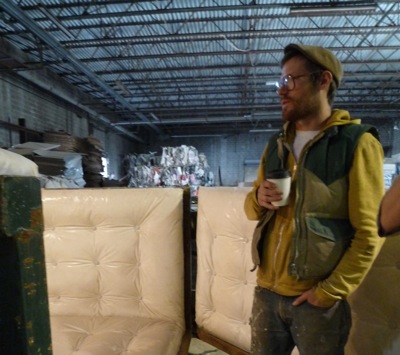 Enter Dufala and Gookin. With grant money from Philadelphia’s Creative Industry Workforce initiative, they’ve built out RAIR’s 1000 square foot residency space inside a cavernous corner of a Revolution Recovery warehouse where power tools, cables, metal scrap and sawdust abound. For now, the space is open to the rest of the facility, where stacks of insulation material and plastic sheeting, compressed into massive cubes, line the corrugated metal walls right up to the ceiling. Outdoor storage space is crammed with office chairs and cubicle desks that don’t look a day over two years old. 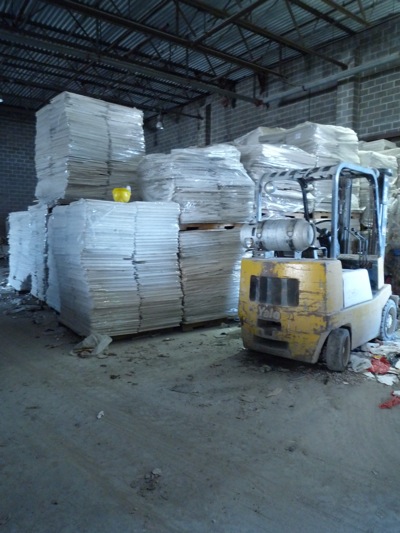 As the trio pushes RAIR forward, the buzz is spreading. “A lot of people with different projects are coming to us,” says Gookin. While appreciative of the interest, the three are set on building a solid foundation for the residency program before expanding their focus. “As much as you might want to, you can’t say yes to everything,” Dufala emphasizes. “I’ve had to get much better at saying ‘No.’”

Once the residency program is more firmly established, Gookin and Dufala hope RAIR will serve as a platform and think-tank for ways to divert excess materials from landfills and raise awareness about the waste stream. Future plans include the creation and distribution of a materials database and an outreach program to raise awareness about waste streams. Dufala hopes to one day affect policy changes to make the recycling process more transparent and accessible. Gookin is set on making RAIR part of a larger regional network of sustainable practices.

Despite growing enthusiasm and support for the project, Gookin emphasizes that running a large-scale recycled residency program on soft-money is far from easy. All three founders still hold down independent jobs. So while RAIR is currently run as a non-profit, its founders are actively brainstorming alternative financing options. “It’s the kind of thing where you want to lock yourself in a room and bang yourself against a wall until you find the answer,” Dufala says.

For now, however, the trio is focused on the basics. “There’s a lot of groundwork we have to lay,” says Gookin. “But we’re getting there.”