Last week, the German Marshall Fund hosted two workshops in the Great Lakes region, one in Cleveland and one in Detroit. Both welcomed both American civic leaders from the region and civic leaders from older industrial cities in Europe to discuss the concept of regionalism, how regional identities are fostered, and how regional strategies can help promote economic development. The workshops drew on the experiences of both older industrial European cities as well as local and regional leaders to explore in depth a number of topics relating to these themes.

Sharon Carney, a member of the Next American Vanguard 2009 and Special Project Director for the Michigan Suburbs Alliance, attended the Detroit workshop and offers her reflections here.

Torino Mayor Valentino Castellani disarmed our crowd with a simple statement: “I have nothing to teach. You can’t teach the change.” Instead, he told his story of turnaround accomplished through cooperation and bold leadership.

It goes like this: Castellani took office in 1993 when manufacturing was at the low point of a three-decade decline, his single-industry town had an unemployment rate in the teens, and the revolving door of political leadership had just finished spinning. (Sound familiar, Rust Belt?)

· Let legacy drive investment. Castellani asserted new growth should build on the memory and experiences of the community. He tapped Torino’s cinematic heritage, first by creating a film commission, then a film-related technology park, and eventually launching the Torino film festival to promote the city as a place for film and connect young people to work opportunities.

· Reuse creatively. Torino converted several industrial spaces to art exhibitions, amusement parks and recreation facilities—some temporary, some permanent, but all of which retained a close resemblance to their manufacturing pasts. These sites became community attractions and often engaged them in the process through design competitions. 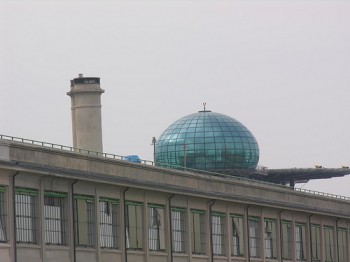 The Lingotto factory building, which was converted by Renzo Piano from a defunct carmaking facility into offices, retail and entertainment space, and a museum. Image by phileole via flickr.

· Leverage peer insight. Castellani invited Barcelona’s mayor to sit on Torino’s Olympics planning committee because Barcelona had experienced a similar post-industrial transition and the ’92 Olympics. What if Rust Belt cities took a similar approach? Can you imagine a mega-regional support system of mayors in various stages of transition?

Ironically, Torino long ago modeled its single-industry economy after Detroit and the success of Henry Ford; today it offers Detroit a lesson in post-industrial prosperity. Sans Alps and political continuity, plus Great Lakes and racialized politics, the Detroit-Torino parallel is uncanny. So what do we take from it? In the absence of teachable change, I hope we’re ready for trial by fire.